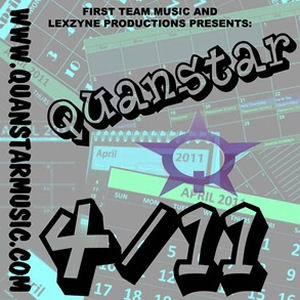 When Radiohead released “In Rainbows” as a pay-what-you-want download in 2007, people lauded it as the future of the record industry. Who needs labels when artists can reach the fans directly, and Radiohead’s success seemed like proof that this was a viable business model. What people forgot was that Radiohead are one of the world’s most popular bands, and the reason for their popularity has at least something to do with the close to two decades of major label support for the band. Ask the struggling indie artist with an album on iTunes how many copies they’ve sold, and they’ll tell you that it isn’t so easy when you don’t have years of a major label’s advertising budget behind you. The other thing the indie artist will tell you is that doing it yourself is a hell of a lot of work. Quanstar, who has been releasing his own material and booking his own shows for a few years now, loves the freedom of being an indie artist, but acknowledges that it takes a lot of hustle to get yourself heard.

His new pay-what-you-want EP “4/11” might make less of an impact on the market than “In Rainbows” did, but it’s not for lack of trying. The Compton MC has put out several albums, mixtapes, live recordings, and a documentary, all by himself. This site was impressed by last year’s “The Underdog” and Quanstar doesn’t disappoint with this follow up.

He starts off by personifying cocaine on “Yayo,” showing the destruction the drug has caused:

“Most of my soldiers were dead or in jail
Fighting for my attention to get them out of this hell
Prisoners in their own homes
Cities turned into war zones
Women sell their babies so with me they’ll be alone, man
Fuck the community let me get what’s due
And you’ll be good for a little while ’til I’m through with you too”

“Groove With You” starts with Quanstar rapping “Let me dispel a few myths/Most rappers you meet ain’t really got shit.” He goes on to describe the grind of being an indie rapper, but keeps it on the positive rather than complaining. After all, if he didn’t like what he was doing, he wouldn’t spend so much time doing it.

“Come Back To Us” is a cautionary tale about success. Quanstar describes a rapper being ruined by a shitty label deal and the party lifestyle, a football player being ruined by steriods, and a whiz kid stockbroker being ruined by the allure of wealth. “Don’t fly too fast/you might run out of gas hit the earth with a crash” raps Quanstar, sounding like the wise older brother. It’s a role he takes on for much of the album. His flow is steady and unhurried, and his rhymes offer lessons about making it in the industry and admissions of his own shortcomings as a husband.

Quanstar has grown man beats to go with his grown man rhymes. Most of the songs sample 80s quiet storm R&B. Anita Baker even gets a feature on “What’s Wrong.” That may sound cheesy, but the tracks are flipped just enough to make them work, and the result is the perfect sound for cruising. Quanstar mixes it up on a few tracks, getting screwed and chopped on “Sure You Want It,” and coming harder on “Underground Rap Star” featuring Tea Bag Da Herbalist (good rapper, terrible name).

“4/11” is a solid collection of grownup rap. While its low-key vibe and quiet storm samples don’t make for the most dynamic music, it’s worth a trip to Quanstar Music to give it a listen. If you like what you hear, give the man a few dollars for the download: he works hard enough for it.