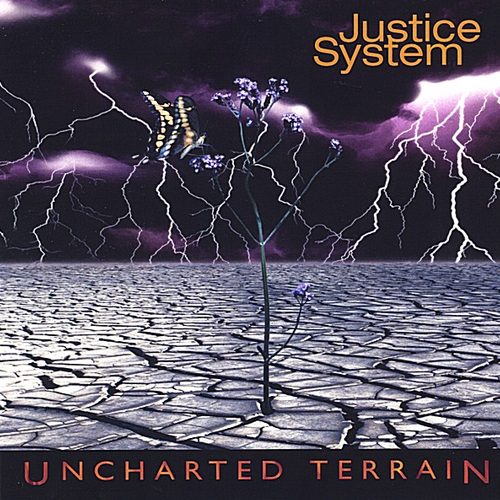 New York outfit Justice System toured and recorded extensively after their 1994 MCA debut “Rooftop Soundtrack,” a brilliant record with somewhat of a cult following, eventually breaking from the label and establishing their own imprint. The follow-up didn’t come until 2002, and while many of their non-concert-going fans were surely dismayed by their long absence, the overdue “Uncharted Terrain” didn’t disappoint in the slightest.

The band’s growth between the two records is monumental, and where “Rooftop Soundcheck” was often a celebration of youthful exuberance despite its exploration of a variety of moods, “Uncharted Terrain” is a far smoother and more mature record. Much of the LP adopts a more tasteful and artistic vibe, perhaps more suitable for a late night than the predecessor’s sunny summer afternoon. Once again the band sounds fantastic. Although truth be told Justice System has few competitors in the “hip hop band” realm, the instrumentalists are truly masters of their art and by this point had years of experience to add to their immense talents. Songs such as the ultra-smooth “Parole” and “Thoughts Left Behind” showcase Wizard C-Roc’s majestic guitar, Eric G’s impressive yet never overpowering percussion, and Coz Boogie’s infectious basslines with extensive soloing. The contagiously relaxed “Girlfriend” features a gorgeous airy flute break, and the band’s sonic balance is at times a wonder to behold.

The rappers’ progression between their debut and sophomore efforts is particularly notable, largely shedding the young zeal of much of “Rooftop Soundcheck” in favor of a suave poetry. Folex in particular stands out on this effort with an attentive lyrical eye and awareness of the tempo that lends his verses a particularly musical quality. The lyrics throughout are far more ambitious than most anything on the debut, yet their consistent success is unique. The early tracks dig deep into the emotional psyche to embody heavy personal expression:

“Bombarded with the feeling of loss and pain
Broken heart on the floor, I was now estranged
I had to get right, get my mind in focus
The magic and confusion had me hocus-pocus
Pullin’ rabbits outta hats seemed way too easy
It was gonna take a miracle for love to please me
Throughout the nonsense to make sense of it all
Was my love gone forever or awaitin’ my call?”

The tempo picks up with the enrapturing “Dawn of the Apocalypse,” a sonic gem that exudes unrest despite its incredible smoothness. Mo’ Betta Al and Wizard C-Roc shine on the tenor sax and guitar respectively as Folex paints a vision of modern Armageddon:

“Adrenaline surged, emotion climaxed
He runs from the devil, that’s how he reacts
But even through the tears this human-type animal
Possessed the skills to survive and act rational
How I’m gonna run from fate? If it’s destiny
Then I guess today’s my death day
I turn back around start driving southbound
I’m goin’ out taking the terror king’s crown
The mind is my weapon, on this pedal I’m steppin’
I crept in, saw the missiles interceptin’
The terror king landed on his black gold chariot
Rushed past the devil like my name was Harriet
Tubman, grabbed the gunman, grabbed his gun and
Runnin’, the terror king saw me comin’
As I cocked back the hammer flame came from his lips
And the last word I heard was apocalypse”

The frenetic “Freedom… Let It Ring” is an instrumental and lyrical highlight upholding the theme of social inequality, and “The Fuzion” is a wonderful instrumental interlude that soars even at over eight minutes in length. “Brownstudy” is slow, eerie, and abstract yet totally engrossing, while “Industrial Spy” is the most energetic of all, with the MCs sporting smart chemistry with their bars detailing the dangers of hurtling modernization. The title track sports a vicious funk, and on the loopy “Polluted Soup” they again take on the ills of a materialist society:

“What the hell is cheese food? Does it come from a cow?
Bologna comes from pig’s noses? Are you telling me now
That the cheaper the cost, then the higher the profit
So corporations don’t care what they put in their products
Thank you anyway man, but you must have been zooted
Thinkin’ that I want seconds of your soup that’s polluted”

“Uncharted Terrain” is a dazzling piece from a band with a sound, approach, and vision unlike any other I’ve heard. The songs here are more expansive and creatively ambitious than most on their debut yet prove equally inspiring and endearing. Musically it is consistently fantastic and makes for an addictive and lasting listen. Although Justice System continued to perform, future recordings proved elusive beyond a collection that came a year later, and “Uncharted Terrain” is a gem that like the group’s debut is far too slept-on.