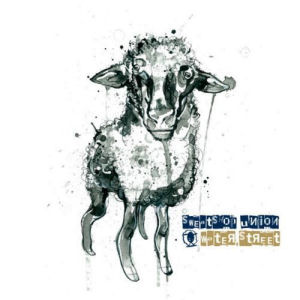 Many of the Back to the Lab albums we cover at RapReviews.com are the result of direct requestsfrom our readers, and Sweatshop Union’s “Water Street” is no exception. Although I heard enough that I liked on “United We Fall” back in 2006 to give them a 7 overall and a 7.5 for lyrics, I hadn’t been keeping up on their endeavors in the days since. If one wants to be fair they didn’t exactly keep me appraised of theirs, and in the last six years they’ve only released this album and one other EP. That’s not exactly what one would call “prolific.” The individual contributors to this large collective stayed busy, but getting them all in the studio for one session seemed almost Wu-Tang-esque in difficulty. On top of all that, S.U. founding member Kyprios opted out of future group projects to further his solo career, so “Water Street” is his last album with S.U. (for now).

For those unfamiliar with Sweatshop Union’s philosophy or work ethic, they are a politically conscious crew who is not afraid to stand up for causes, or even to stand opposed to the mainstream of the very genre they are a part of. It’s probably helpful in that regard that the membership is Canadian, because the Union can be part of the North American roots of hip-hop at large while maintaining their own worldview separate from that of the United States. Let’s not draw too large of a distinction from this difference though, as though all rappers South of the border are materialistic and vapid, while all rappers North of it are open-minded and egalitarian. There are economic truths the world over that are fairly constant, and unless you’re living in a commune and eating granola you undoubtedly deal with them every day. You need money to put clothes on your back, food in your mouth and a roof over your head. “Pot of Stew” recognizes these fundamental truths:

“At the end of the day, if my rent isn’t paid
then I’ll be livin in a tent or beggin friends for a place
to rest my head, so YES my bread’s on my brain
It’s a lead ball and chain, but I get it all the same cause
Everybody’s gotta struggle man
You can either let it stress you out or say FUCK IT
Get up and start hustlin; shit, stop makin someone else rich
Hell, get selfish, then split the wealth”

Sentiments like these make it easy to relate to the S.U. crew. These are not pie-in-the-sky daydreamers with unrealistic utopian ideals; they are a down to earth rag-tag group of rappers working together to achieve their goals of success. And by and large “Water Street” is a success. At 23 tracks long this album could have been significantly bloated, but with at least 7 different artists contributing things don’t ever bog down for long. A lack of liner notes makes it impossible for me to properly credit producers, but won’t prevent me from shouting out a few standout tracks. “Goldrush” switches between vocal and instrumental harmony in the backdrop, which blends perfectly with an upbeat drum track, then collides with a friendly chorus without damage to either – a headnodder that also leaves you smiling. “Time Machine” is a speedy headrush which will remind many listeners of their aggressive Canadian compatriots Swollen Members. If there was an outlet for it beyond college radio, the funky horns and addictive rhythm of “It’s Alright” would be a big hit anywhere – complete with an appropriate Biggie scratch boasting “Damn right, I like the life I live!” The slow paced and hard bass-ed “Swing Low” brings in Moka Only for a fresh and fun cameo.

“I tried to be a superhero, yeah, much Untouchable
But the fun buckles under much load, so what’s the lowdown
on the go-downs, of your favorite icons?
We ain’t, left ’em all the pronouns, fantasy is bygone
Damnit I ain’t Moka, I’m Dan, with a light on
My name and it ain’t even that bright of a light
It’s just the truth and the factual I want to make it hip
Musicians, we ain’t wizards – even Bono takes a shit!”

If one could pick out something to knock about “Water Street,” and there’s not an abundance of things to hate, it’s that the members sometimes seem a tad sad and depressed about the state of hip-hop music and culture and their own role in it. Even the cover of their album looks like a young lamb covered in dirt, fleas and disease – it’s not a happy-go-lucky place to start the experience. Songs with titles like “So Tired,” “Blah Blah Blah,” “Gutterball” and “Never Go Home” certainly reflect a morose feeling even BEFORE listening, and one can hardly ignore that the closer is a three minute plus long somberly sung piano opus entitled “Dig a Grave” (though there’s also an unlisted bonus track after). They shouldn’t be this sad about making music this good, but given a lack of support from traditional media outlets, I can understand some amount of depression. Cheer them up a little and take a chance on “Water Street” – it’s quality hip-hop.