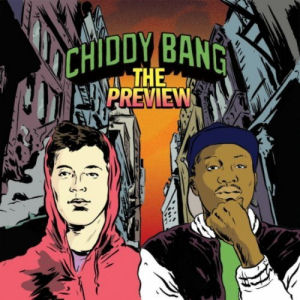 Seizing the moment is one of the trickiest tasks the people responsible for a rap act’s career (label staff, managers, publicists and last but not least the artists themselves) have to tackle. Chiddy Bang’s “Opposite of Adults” was a song that didn’t resonate too deeply with the rap industry but that did garner attention and airplay on the internet and abroad. The song became commercially available as a single in the first half of 2010, charting in various countries and almost cracking the UK’s top ten. Intially titled “Kids,” it had begun to made the online rounds roughly a year earlier, turning heads with its sampling of indie rock sensation MGMT.

The initial resonance of “Opposite of Adults” likely took Chiddy Bang by surprise as they hadn’t released as much as a free mixtape. Naturally, the song was included on their ’09 debut tape “The Swelly Express.” But “Opposite of Adults” still had untapped potential, so then came the video and the official digital release. Later in 2010, the song finally wound up on a CD. The title of the EP, “The Preview,” suggested that the main event was still to come.

There’s a chance “Opposite of Adults” will remain Chiddy Bang’s biggest song, and they may very well be able to live with that. It acts as a perpetual door opener, it can steadily garner views on video-hosting websites, it remains available through digital music stores, etc. The days when the moment to be seized meant releasing the album that ‘contains the hit single’ at the right time are gone. Today it’s about parlaying whatever buzz you have into a career that doesn’t depend on sales only. That’s why “The Preview” is merely a traditional release “Opposite of Adults” happens to be on, a concession to the old days, if you will. The sales performance of “The Preview” doesn’t make or break Chiddy Bang.

In fact Chiddy Bang have already found other ways to get their name in the news, rapper Chiddy setting two world records (Longest Freestyle/Longest Continuous Rap) when he rhymed for 9 hours, 18 minutes and 22 seconds straight on April 29 during MTV’s O Music Awards, a feat to be acknowledged by the Guinness Book of World Records. At 25 minutes running time, “The Preview” is a wee bit shorter.

Things kick off with “The Good Life,” a lively combo of keyboard cascades and realistic snare and bass drums. The sing-along intro/hook and the invitational gesture on the part of the rapper (“Baby girl, I got a ticket, do you wanna go?”) make for an optimistic opener. “Truth” keeps the momentum with euphoric key swirls and twirls alternating with carefully chopped parts during the verses. “Opposite of Adults” is a live wire, the key stabs from MGMT’s comparatively somber “Kids” being whipped into a frenzy by producer Xaphoon Jones. While the video clip visualizes the idea of Chiddy Bang as youngsters by inflating their heads, the rapper spends a great deal of the song’s three minutes expounding that he’s not a kid anymore (as Ahmad once put it, sufficiently briefly, in his “Back in the Day”), which kind of takes the fun out of it. Still the track as a whole maintains its carefree vibe, also owing to the rapper’s youthful vocalization.

There’s an undeniable dynamic to Chiddy Bang’s music. Providing indie music samples with a pop and hip-hop touch, Xaphoon Jones keeps the tracks fresh by continuously changing patterns and colors. “Here We Go” has a more mainstream electro-hop lean, Q-Tip’s sung guest parts supplying the soulful element. Samples are worked in just as well, for instance on “All Things Go,” where Sufjan Stevens vocals turn into a virtual children’s choir, while “Bad Day” looks to indie folk outfit Darwin Deez for inspiration to send a bitter farewell to an ex-girlfriend. On the hip-hop side, “Nothing on We” and “Old Ways” incorporate ’87 Marley Marl drums and ’05 Swizz Beatz drums, respectively.

Chiddy Bang’s first mixtape was replete with pop culture wordplay. Here you have to wait for it until the closing “Old Ways” (where the rapper also displays an almost Slick Rick-esque singing talent). Chiddy gives an entertaining performance throughout “The Preview,” but when it comes to lyrics he’s too often too basic. He manages to drop lines that sum up the Chiddy Bang philosophy, like “All Things Go”‘s “We gon’ have a little bit of fun / cause when it’s all done / you throw your sneaks up and call it a good run,” but looking at the entire package beats like these deserve better rhymes.

Twenty years ago another hip-hop duo made its debut with an EP to meet rising expectations. Opening with a track titled “Good Life” as well, Pete Rock & C.L. Smooth’s “All Souled Out” was a deft showcase from two talents who would soon drop the gem known as “Mecca and the Soul Brother.” While there was a hierarchy of skills within PR&CL, few Pete Rock tracks fared as well as those with C.L. Smooth raps, they were such a natural combination. While Xaphoon Jones is already getting his Pete Rock on, Chiddy has to step his game up to reach his personal C.L. Smooth level.