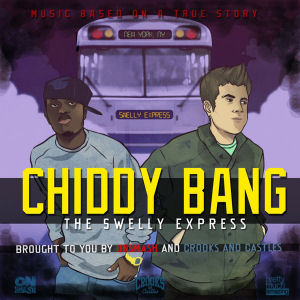 For a group that released their first mixtape less than two years ago, Chiddy Bang certainly has a lot going for them. For starters, emcee Chiddy (real name Chidera Anamege) recently broke the world record for the longest freestyle, clocking in 9 hours, 18 minutes, and 22 seconds. The lyrics obviously grew repetitive after some time, but it remains an impressive feat nonetheless, and the publicity stunt drew live coverage from MTV and catapulted Chiddy Bang into the national spotlight. After having their hit song “Opposite of Adults” featured in a commercial for Need for Speed videogames, Taco Bell used one of their most recent singles, “The Good Life,” for its recent advertising campaign. With the release in 2010 of “The Preview,” a well-received predecessor EP to Chiddy Bang’s upcoming debut album, I figured it was an appropriate time to go back two years and return to the mixtape that started it all. And while “The Swelly Express” is indeed no more than a mixtape from an up and coming group trying to find their footing in the rap game, it has a surprising amount of polish and depth that give it the feel of a well-crafted album.

Fans of Chiddy Bang who are already familiar with the production style of Xaphoon Jones will feel right at home with “The Swelly Express.” With no disrespect to Chiddy, it is Xaphoon’s method of incorporating samples from electronic, pop, and alternative rock music that has come to define Chiddy Bang’s unique sound, and “The Swelly Express” is arguably his most impressive work to date. The mixtape begins with “Get Up In The Morning,” which features a vocal sample from reggae artist Desmond Dekker’s song “Israelites” over a raw set of drums, as Chiddy spits the opening verse:

“Get up in the morning like don’t you feel the power?
Stand up and stretch together and by the hour
I devour, a beat, now the rap game ours
Fresh and so clean we making raps in the shower
Yea, then I hit the boy Xaphoon
He tell me, “Bro, you don’t know I’m making mad tunes?”
And they wonder why we modest I assume
I remember we recorded in a closet of our room
Now I’m grinding, oh yea this is perfect timing
We machine, not hype, they figure we may be climbing
But like a punishment, gotta be grounded
I get up in New York my parents are so astounded
Get up in the morning, and then I hit up Ant
Anything you can accomplish man she’ll never say “can’t”
And I got to drive, my 9-5
They kill your dreams but you gotta keep the grind alive”

The track is an anomaly, though, in the sense that Xaphoon generally draws his samples from more recent music, as seen throughout the rest of “The Swelly Express.” “Danger Zone,” one of the catchiest songs on the mixtape, samples Ratatat’s “Falcon Jab,” as a trippy set of synths and guitars lace the track. On “Truth,” Xaphoon speeds up a section from Passion Pit’s “Better Things” for the chorus, giving the song a vibrant and upbeat feel overall. And, of course, “Opposite of Adults,” arguably Chiddy Bang’s most popular song to date, features a chopped sample from MGMT’s “Kids.” Despite appearing again a year later on “The Preview,” “Opposite of Adults” seemingly never grows old no matter how many times it gets played, and it’s hard not to smile as Chiddy raps “I once was a kid, all I had was a dreamâ€¦” Simply put, nearly every song on “The Swelly Express” offers something new in terms of production, and it’s difficult to find an instrumental that doesn’t measure up to par.

The question, then, turns to whether or not Chiddy can keep up with Xaphoon’s beats, and thus emerges one of the mixtape’s few flaws. There are certainly a number of standout tracks; Chiddy even goes toe to toe with Black Thought on “Slow Down,” rapping an impressive verse over a mellow, piano-driven beat. “Pro’s Freestyle 1.0” features no more than a heavy drum beat and a deep brassy synth, allowing his strong and confident delivery to shine through. And on “All Things Go,” as he chronicles his growth as an emcee, Chiddy spits one of his most memorable verses of the mixtape, rapping:

“It started off with a rhyme and a dream
Made it the greatest and the latest now we fresh on the scene
Got the sample for the kids, won’t you ever grow up?
Went to Drexel and had classes, but I never showed up
I was writin’ all day ’til my hands would hurt
Professors didn’t appreciate it, called me a jerk
New boy needed to learn, but I never would
Pay attention in school is something that I never could, uh
And know with a beat, gotta be steaming
And we could work wonders over logic and reason
We on the hype now, they call it a buzz
And how we get the party popping, Baltimore club, uh
MySpace they could replay next
And you gotta have Xaph for the DJ set
No matter how they ever play us, they can never replace us
And any way you slice it now, homie, they came to take us”

On the whole, however, there are times when Chiddy seems to rely too much on clichÃ©d and overly simplistic rhymes, and his flow, although steady, can grow slightly repetitive after 13 songs with only a couple of guest appearances. Still, though, it’s hard to dock too many points given that it’s the group’s first official release, and his performance on the upcoming debut album will be a much better indicator of his overall lyricism.

Luckily, the few lyrical shortcomings do not take away from the fact that “The Swelly Express” is a polished and enjoyable debut mixtape from the Philadelphia duo, and it is a must have for newer Chiddy Bang fans who joined the bandwagon after hearing “The Preview.” Xaphoon’s production is on point for nearly every track, and the hip-hop-electronic-alternative blend he creates on the mixtape has helped set Chiddy Bang apart in a hip-hop game that has become muddled by a slew of artists who more or less sound the same. And while Chiddy isn’t a top notch emcee, he still delivers an overall solid performance that meshes well with Xaphoon’s beats. With the group’s debut album still on the way, and given that “The Preview” clocks in at less than 30 minutes, fans looking to hold themselves over in the meantime should not hesitate to revisit “The Swelly Express.”