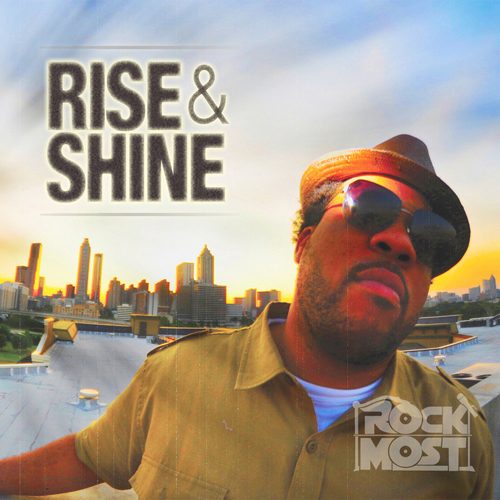 In 1995 on “Playas From The South,” the late Pimp C quipped that “niggas be hollerin’ Texas just because it rhyme with Lexus.” In a way, I have the same sentiment towards a colloquialism that you’ll see countless times on Twitter and Facebook if you’re up early enough or just haven’t gone to bed yet: Rise and grind. I suppose it’s okay to say, but I suspect that in half of the cases, that grind leans more towards Folgers coffee than anything else. But what do I know? Anyway, sorry for going off on a tangent there. Here we have Ohio-born and Atlanta-based Rock Most with his sophomore release “Rise & Shine.” The LP features ATL notables Boog Brown and Clan Destined and others including Tru.Ski, Stan Steam, Jahah and Cherry Royale. As Rock was working on “Rise,” he had a couple experiences that changed both his life and the course of the record. First, there was a head-on collision which totaled the tour van and secondly, there was an armed robbery situation which ended with Rock shooting and killing the robber in self-defense. Now that right there gives Rock all the ammunition he needed to become one of the game’s biggest gangsta rappers on wax, but he chose to take the two negatives and put the emotion associated with them into “Rise & Shine.”

Rock Most is a triple threat artist being that in addition to emceeing, he also deejays and produces as well. He makes this known off the bat on the album’s opener “Who’s Coming With Me” as he raps: “They became refined by the things we say/ But y’all couldn’t drop science to save your G.P.A./ See me deejay, see me rock mics/ See the crowd hype, but with you not quite.” The “Dirty Bomb Airlines” skit is fairly short and comes off as a cross between a Family Guy bit and the host from ATCQ’s “Midnight Marauders” album. “Pass ‘Em By” tells the classic tale of friends that become enemies when success comes into the picture and “Whatever” hits on a few predicaments that seem to be prevalent in many interpersonal relationships. There’s the I-don’t-care-about-those-other-girls-just-be-good-to-me approach, the young woman that’s blinded by bling and the woman that’s so jaded that she can’t see a good thing when it’s staring her in the face situation. All very common, making it a track that should be easy for some to relate to on a few levels. Rock gives the middle finger to labels on “Labels,” as he rejects the categorization of East Coast, West Coast, mainstream, underground or whatever else for his music. RM takes us to the strip club to indulge in his “Guilty Pleasure” and makes a great point by asking “Don’t you spend money on YOUR favorite entertainer?” Well, as with most things, you have to take the good with the bad, and attempting to pour whiskey in your man’s MPC is certainly on the bad list of things examined on “Hating You.” Boog Brown makes her presence felt on “Move” which implores emcees to step their game up and get the crowd moving. Time’s up for all that standing in one place foolishness and Rock asks “How you so hip that you forgot the hop?” Rock takes flight on “Going UP” and confesses that the song isn’t about bragging, but about what actually happens, as he raps:

“Anybody who ever knew me know it ain’t no game
Up to the same old thing and I ain’t gon change
Doing shows, gettin’ money is how I sustain
Leavin suckas in the dust like a souped-up Mustang
And their engines freeze up, most of the emcees suck
And it’s amazing because y’all love ’em like some D-cups
Y’all hopeless, like some gold diggers with prenups
Tryin to catch my flow, but it’s too deaf and greased up
Rock Most, two words, definition literal
Triple threatening and pivotal on analog and digital
Whatever a nigga do, try to be my best at
Not your best, but my best. The most high, the blessed at
Take all you fresh cats, wrap y’all into one
But y’all still don’t roll like me, second to done
Man I’m holdin’ down the A, still reppin for the O
Rock muthafuckin Most, somebody better let em know”

Tru.Ski makes his second guest appearance on “Ready” which is all about preparing for change and venturing outside of the comfort zone of complacency. “Prosper” is another strong song as the album starts to near its end. The main idea of the track is that we don’t necessarily need be a superstar or amass hundreds of accolades to be considered a success. Prosperity is where it’s at. Fans of “The Mack” will appreciate the short skit that precedes the Clan Destined-featuring “Kill The Feed” and the album closing title track. We find Rock dishing out advice for anyone with an open ear to listen, as he raps:

“So yes, success is a habit
But you gotta get it in, it don’t come automatic
The only thing that’s certain is giving up is tragic
To all y’all sittin’ back, praying on magic
Do your due diligence, rise off your asses
Stop complaining about how you had it the baddest
Facebook that shit, determine your own status”

Rock Most comes across as a pretty cool dude. He doesn’t seem to be too full of himself and he’s aware of his talents. He often delivers the type of lyrics that will hit you and then take a second for you to feel the effect. There were plenty of lines that I didn’t fully get until perhaps a bar and a half later and that’s always appreciated. The production here is head-nod inducing and doesn’t drown out the lyrics or the messages. I may not fully kowtow to the idea of rising and grinding, but “Rise & Shine” works well as a formidable soundtrack to the day, regardless of the time you rise.