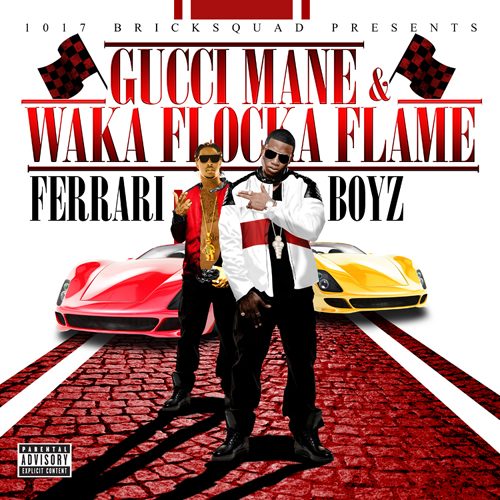 Looking back it was inevitable that Gucci Mane and Waka Flocka Flame would collaborate on an album, and not just because they both hail from Georgia, or because their last names are pronounced almost the same. (For the know-nots, you say “goo-chi MAIN” like he’s your main man.) It’s not even because they’re both on the 1017 Brick Squad roster. The simple fact is that their simple rap style is all but interchangeable. Waka could write rhymes for Gucci, or Gucci could write rhymes for Waka, and you wouldn’t be able to tell the difference from what they wrote for themselves. Their topic matter is identical – hustlin, trappin, fuckin, rappin, being major, stacking paper, dissing haters, rolling Mercedes – sorry FERRARIS. Just like the brand of fashion Radric Davis is named after, their tastes in conspicuous consumption must be expensive and European at all times.

I think it’s fair to say neither one of the artists featured on this album reflect my hip-hop taste like a mirror, but that’s not to say they haven’t gotten some good reviews here and elsewhere. I admit to being surprised by how much Patrick Taylor enjoyed “Flockaveli,” just as I’m sure some RR readers probably think I’m joking when I say I liked “The State vs. Radric Davis” even more than Louis Cloutier did. I think the best answer to the question why is that quality production can inspire even a normally mediocre lyricist to try harder, while in turn the quality beats can make the music more enjoyable. Unfortunately on “Ferrari Boyz” only the latter half of that last sentence is working for me. Some of these songs have incredibly banging beats that inspire high volume bass heavy replay on the stereo of your choice, the Shawty Redd produced “In My Business” among them. When inspecting Gucci’s lyrics though, he’s back to the overly simplistic nursery rhyme rap style I’ve prayed for years he’d grow out of:

“If it ain’t ’bout paper, there ain’t no convo
See I ride scrapers, and y’all ride Volvo
But that’s my M.O., I go where you won’t go
I smoke what you cain’t smoke, I’m rich and you’re flat broke
See I’m not a blogger, and I’m not a jogger
I’m more like a mobster, just call me a baller
A Chevy Impala, sittin on them 40-o’s
I got a lot of things, but I owe ’em to Sergio
[…] You hate me then oh well”

Hate’s the wrong word Gooch. See it’s easy to let Radric or his friend Juaquin define the terms of discussion, and label anybody who doesn’t enjoy their simplistic and materialistic raps a “hater.” There are definitely people in this world who would be envious of their success, and some who would even accuse them of being undeserving, but if the Brick Squad know anything it’s how to market and promote their shit. By making it popular enough that even white boys rap about trapping, hell they deserve every penny they make and every Ferrari they can afford. It’s not their success that bothers critics, it’s the lack of substance to it. It’s not that it has to have a positive message, or be a role model for kids, or educate the listener, but even if it’s about flaunting wealth and success it should have some depth in rhyme writing and delivery. Ludacris, Notorious B.I.G., Trick Daddy or Ice-T all floss in their songs but do so without boring interchangeable raps. Take the Southside and Lex Luger produced single “Pacman” – it bangs the trunk and the name implies it might have some clever video game inspired rhymes, but Waka doesn’t deliver:

“25 to 10, 9 and a fo’-five on me
I don’t need no co-D, do it by lonely
CB4 gangsters, man they so Gusto
24-7, all I do is hustle
Old folks in the hood call me THE man
Triple cup styrofoam, I sip LEAN man
Straight slow sippin, man my finger itchin
I been rappin for three years, man I need a mission”

Yeah Waka, I think you do. Now look at the quote from Gucci earlier, and look at the quote from Waka above. If you know both rappers, just picture either one rapping the other’s verse. Okay Gucci’s been rapping for more than three years but other than that it sounds the same either way. That’s the real shame of “Ferrari Boyz,” because it exposes them as being so like minded they might as well be the same person. The beats are fresh though. Schife’s “Break Her” is a hard hitter straight out of the horrorcore sound of Three 6 Mafia. Redd hits again on “Stoned,” a straight up head nodder. Drumma Boy doesn’t need to tell me to “listen to the track bitch” because he does just fine on the title song and “What the Hell” – in fact I’d take the latter in particular as a banging piano instrumental all on its own.

The production of South and Lex carry the majority of the hour long album, and I do mean carry, because I doubt I could get through this otherwise. If you can stand a strong absence of talent on the basis of the beats alone then you’re probably going to enjoy “Ferrari Boyz” a hell of a lot. If on the other hand you would think that Waka would be better after rapping for three years, and that Gucci would be better after rapping up to three times longer, you won’t find what you’re looking for. I want all the success in the world for both men, particularly Gucci (stay out of prison bruh) but it’s promotion and marketing that will make “Ferrari Boyz” a success – not the lyrics within.