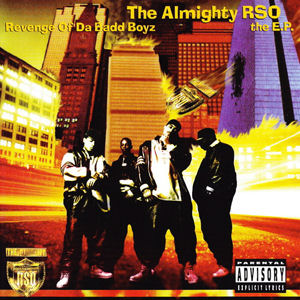 “We’re four the hard way, gangsters of rap
Hardcore for sure, rhymes blow you off the map
Step back, stand clear, get out our path
or you’ll soon feel The Almighty RSO’s wrath

We’re notorious, like a drug kingpin
Up against me suckers could never win
I’m like a terrorist comin’ out of Beirut
I load my mind with the rhyme, pull the trigger, then shoot”

Bad boys in rap may be forever associated with the 1990s, when a music industry upstart created a veritable brand out of the colloquialism for non-conforming male minors. But not only were there at least two (albeit small) Bad Boy Records releasing hip-hop in the ’80s, rap music’s rebel image originated some crucial years before Biggie yelled “I’M A BAD BOY!” on “Party and Bullshit.” Schoolly D, Ice-T and Eazy-E were at the forefront of bringing bad boy behavior to the young genre. On a local, independent level so-called gangsta rap spread slightly faster than in the mainstream, sometimes affecting acts who already had been on the scene some time. In Boston, The Almighty RSO Crew adapted a harder stance on their 1988 single “We’re Notorious.”

The cover showed six young men standing on the Cambridge side of the Charles River, the Boston skyline behind them, all clad in Adidas track suits and shoes, two of them defiantly gripping guns barely tucked into their waistbands. The 12″ likely served to distinguish the crew within the Boston scene, after less intimidating songs like “The Greatest Show on Earth” (’86) or “Call Us the All” (’87). But it was still a long way to national notoriety.

They made a big step by signing with Tommy Boy, then home to breakthrough artists Naughty By Nature and House of Pain. In 1992, their debut single for the label, “One in the Chamba,” caused a local controversy when the Boston Police Patrolmen’s Association announced it would sue Tommy Boy owner Time Warner (at the point already under fire for the Body Count song “Cop Killer”) for violating a state law that prohibits the distribution of material that “advocates, advises, counsels or incites assault upon any public official or the killing of any person.” The police union was supported by Jack Thompson, a Florida attorney who had embarked on a crusade against sex and violence in entertainment and media, and Oliver North, who was gunning for a career in politics after being exposed as one of the main culprits in the Iran-Contra affair. The outcome was that RSO were dropped from their label, making them another casualty in the “Cop Killer” saga.

After a short stint with Flavor Unit, The Almighty RSO finally put out their debut EP in 1994 through RCA. It included, licensed from Tommy Boy, the infamous “One in the Chamba.” The track had initially been recorded in reaction to two young men, one 16, one 25, being fatally shot by police in 1991. In his opening verse, Tony Rhome laid it all out and drew his conclusion:

“A brother caught a bullet, now he’s dead
Shot by a cop who seen him trouble enough to bleed him from the head
And that’s goin’ out the foul way
Straight up murder, word of mouth is that he done him in the hallway
And like always a lot of controversy
But of course he got away scot-free and yo, it hurts me
And it makes me angry just knowin’ that a cop can’t stop
Reach, pull the trigger, no speech
Laid off for two weeks and then he’s back on the streets
No investigation
just a paid vacation
for the jake who did the bustin’
Yo, you can’t trust ’em
Cause back in Boston there was a kid trailed by a cop
Days later the same kid found shot
Bleedin’ to death as he was left up under a car
Hey yo Boston, I’m gettin’ strapped, I know who they are
Cause back in the days I went to school with him
And I remember when I was kinda cool with him
But now he got a badge and a tool with him
and he’s up to no good in the hood
and he would make your life a livin’ hell if he could
And I don’t see an endin’
unless the corrupt cops on the streets are apprehended
Until then I’ma feel my life is in danger
So Tony Rhome is keepin’ one in the chamber”

Thus taking precaution is as far as “One in the Chamba” actually goes as regards police. The other two rappers reserve their bullets for their criminal activities. From an artistic point of view, “One in the Chamba” succeeds in painting a vivid picture of the urban wasteland, last but not least on a musical level (with busy drums contrasting an airy Blackbyrds sample).

RSO were no strangers to the toll of street life. Big T, one of the men on the cover of “We’re Notorious,” was gunned down in 1988. Rapper R.O.C.K., who had just joined the crew, was fatally stabbed in 1991. He makes an impressive posthumous appearance on the intense interlude “Out on Parole (Time to Flip),” which is more action-packed than a lot of gangsta rap songs.

The EP itself starts with a dramatic entrance with tunes that have accompanied iconic movie characters such as Rocky, Dracula and The Man With No Name. “Hellbound (The RSO Saga Part 2)” presents a group at a make-or-break point, the pent up frustration erupting in a fateful, epic track.

The rest of the EP is just as musically eventful. The title track, a follow-up to the only song they released with Flavor Unit, starts off on a block party vibe via a Kurtis Blow sample, but as the heavy drum section stomps its way through, the track takes on a decidedly menacing shape. Ray Dog introduces them as “Boston’s original bad boys” who apparently represent the Bean “the right way,” and E. Devious does his best to live up to the hype:

“I seen some kids get hard overnight
They scare some
but never down for a fair one
So if you’re weak to a bad boy you’re no comp
You get shot, you get beat down, you get stomped
That’s how it is, boy, you better not snitch
Every crew got a shorty and a finger with a bad itch
Takin’ heads, snuffin’ lives
Makin’ families (reminisce) like Mary J. Blige
So give a bad boy respect due
before he got to wreck and check you
And bring a clip full of mad noise
Yeah, that’s how it is when you roll with some bad boys”

“One of Those Nightz” makes another nod to the ’80s (this time electro) as RSO are joined by Freddie Foxxx for a wild night on the town. The layered production angle of Ray Dog and DJ Deff Jeff comes to full fruition on the closing posse cut “5 Minutes of Doom (Comin’ From the Legion)” as the track continuously changes without losing its hellbent drive.

One cannot talk about The Almighty RSO without mentioning the group’s significance in the history of what once was the biggest hip-hop publication on the planet, The Source. I have already done so in our write-up of “Doomsday – Forever RSO.” But regardless of who did what, I was always convinced that the coverage of RSO in The Source itself was deserved. Albeit there is a tendency to substitute substance with show here, “Revenge of Da Badd Boyz” is a strong EP, in good old Source terms at least DOPE (3.5 mics), if not SLAMMIN’ – DEFINITE SATISFACTION (4 mics).