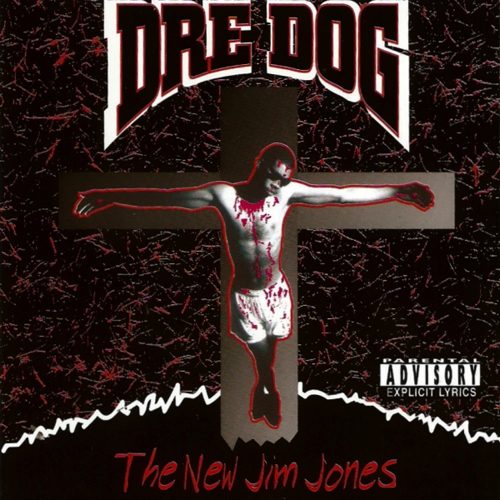 First off, there are two versions of this album. One was released in 1993 under the name Dre Dog on In A Minute Records, a Bay Area label which was also home to R.B.L. Posse, I.M.P., and some of Too $hort’s early work. The In A Minute version, which both Amazon and Amoeba Records in San Francisco have for sale, has a picture of a Dre Dog crucified on the cover. The album was re-released in 2006 on Mo Beatz Records with a different cover. I found it on Emusic on what I believe is Andre Nickatina’s own label I-Kahn. Dre Dog is still named on the cover, but it was filed under Andre Nickatina, which is what Dre Dog changed his name to after two albums. I’m going to refer to him as Dre Dog for this review, but you’ll find most of his records under the Nickatina moniker.

The Jim Jones referenced in Dre Dog’s 1993 debut is NOT the Harlem rapper. Andre “Dre Dog” Adams chose to proclaim himself the second coming of the late Reverend Jim Jones, founder of the Peoples Temple in San Francisco, and ultimately responsible for the death of 900 people. The church started out as an idyllic multicultural community,but turned into a cult that moved to Uganda to set up a new paradise on earth, called Jonestown. When a senate investigation into Jonestown resulted in the murder of a senator, Jones realized the gig was up and ordered his followers to drink Kool-Aid laced with cyanide. The result, according to Wikipedia, was the largest loss of U.S. civilian life until September 11. In short, Jim Jones was an evil motherfucker. Calling yourself the new Jim Jones is only a few degrees less offensive than calling yourself the new Adolph Hitler, especially for a San Franciscan like Dre Dog.

Dre Dog doesn’t have any of the megalomania of the real Jim Jones, but his hip-hop persona is an evil bastard. He cares about three things: doing drugs, having sex, and messing people up. He was trying to go harder than the gangsta rap that preceded him, making a concerted effort to be more shocking and more crazy than Ice Cube, the Geto Boys, Dr. Dre, Too $hort and Ice-T combined. Those rappers at least made some attempt to rap about the struggles and challenges of life on the street. Dre Dog is ghetto and proud. He has none of the empathy or O.G. wisdom of Ice-T, and none of the Black Nationalist street poet insights of Ice Cube. Dre Dog’s mantra is “I smoke dope, I rap, and these hoes I fuck.”

The first song on the album is “The Most Hated Man in Frisco,” an answer to Ice Cube’s “Tha Nigga You Love to Hate” from “Amerikkka’s Most Wanted.” It even shares the chorus, “Fuck you Dre Dog, you ain’t shit!” with Dre adding “But I snort cocaine and it gets me ripped.” He is all about the white lady. Before the Clipse or Rick Ross where rapping about selling coke, Dre Dog was rapping about snorting it by the kilo. To my recollection, he is the only rapper who has bragged about being a cokehead. Almost every song is about snorting coke,with plenty of sniffing sound effects. I think cocaine is an evil drug, but there is something hilarious about Dre Dog’s open worship of it. He comes off like a black Hunter S. Thompson, reveling in the insanity and nihilism of his lifestyle.

Over and over again he proves he does not give a damn about anything or anyone. Even the obligatory track about life in the ghetto, “The Ave,” lacks the empathy of songs like “Little Ghetto Boy” off of Dr. Dre’s equally nihilistic “Chronic.”

“Little kids run around with a nose full of boogers
Well my niggas on the block sell that rocked up shit
Touching they gat every time a fool pass
Quick to put slugs up in a niggas ass
We say fuck school, we say fuck grades
We rather get paid and snort cocaine on the Ave”

This from the man who dropped out of the same high school my grandmother went to.

The album’s highlight is “Smoke Dope and Rap,” a dark, funky track about riding around smoking blunts, snorting coke, and looking for women to screw and screw over.

Production is credited to TC and Dre Dog. Most of the tracks sound either jacked, borrowed, or inspired by other gangsta rap songs. I recognized a lot of the samples from songs that had come before or were contemporaneous. “Lips.” shares the same Isley Brother sample as Biggie’s “Big Poppa.” “The Most Hated Man in Frisco” copies the Bomb Squad’s production on “Tha Nigga You Love to Hate.” “Jim Jones Posse” sounds like N.W.A’s “100 Miles and Running.” “Alcatraz” has the whining synths of Dr. Dre’s G-funk. Regardless of the originality of the album, all the tracks sound good, and the only down moments on this disc are the handful of skits. Dre Dog even kills it on “Off That Chewey,” in which he freestyles a cappella for over two minutes.

“The New Jim Jones” is irresponsible, offensive, ignorant, and completely immoral. It’s also one of the greatest Bay Area rap albums of all time. I don’t support Dre Dog’s lifestyle, and I hope to hell he’s cut back on the coke, but goddamn do I enjoy hearing him rap about it. “The New Jim Jones” is about everything you aren’t supposed to do, done with so much style that you can’t help but love it. I can’t believe I slept on this for twenty years. Go buy “The New Jim Jones” right now.