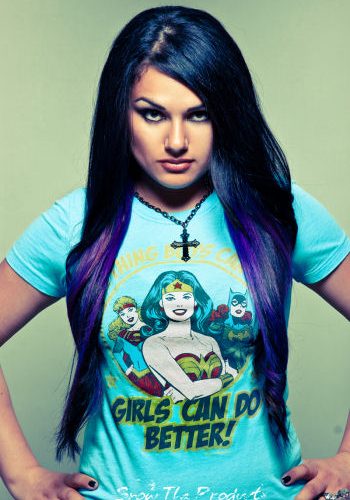 When an emcee is special it doesn’t take very long to figure it out. I realized Snow Tha Product was special about a minute into hearing “Holy Shit,” which has one of the most appropriate song titles ever since the immediate reaction to hearing it is “holy shit!”

In hip-hop we are currently entering a bold new era of female emcees and Snow Tha Product, who currently resides in Texas, but is originally from California, may very well be one of the leaders of that era. She spits like a female Tech N9ne and should be able to attract both underground AND mainstream audiences. This week RapReviews caught up with Snow Tha Product, who was nursing a sore throat, to find out more about who she is and her love of breaking out of boxes, whether musical, gender, or race based. She also hinted that she may crash your prom.

Adam Bernard: Before we get to the meat of this interview, you are currently experiencing some throat related issues. Who have you been yelling at that has caused all these problems? It’s not good for an emcee to not be able to speak.

Snow Tha Product: I actually have always had voice problems since I was little, I was always the girl with the raspy voice, so it never really crossed my mind when I was younger that an artist needs to learn how to use their voice.

AB: Moving to what you’re using that voice for now… when it’s working; as opposed to in years past, there are presently a plethora of talented women making noise in hip-hop (Dessa, Hopie Spitshard, Kreayshawn, etc.). Why is it such a great time to be a female emcee?

STP: I feel like women are all around becoming stronger, and with that also comes music. I think a lot of 90s kids are growing up and coming in this game with a new way of approaching it and it’s making it a great mix of styles. So a lot of women who have that 90s style of music in their influences, it is easier to come in because the 90s were full of women in the game.

AB: The first time I heard you my reaction was “this woman sounds like a female version of Tech N9ne.” With that in mind, I’m wondering, have most of your musical influences been male, and if so, why do you think that is?

STP: Thank you, and yeah, most of my influences are male because most of the industry is male. However, women like Missy, Lauryn Hill, Aaliyah, Amy Winehouse, Rocio Durcal, Shakira… a lot of strong women have influenced me, as well. The fast rap has actually more to do with how fast I talk. I talk pretty fast. And yeah, I was influenced by Biggie, Andre 3000, Ludacris, Eminem, Busta Rhymes, Tupac, and a lot of rappers with big voices and versatile styles.

AB: Do you view it as a positive that you’re being compared to male emcees, like you’re breaking out of a box before you can even be put into one?

STP: I think it is a good thing. I always applaud the person who can actually make an assessment, or review an artist, because of their talent, and not their gender or color. I feel as though it’s so easy to compare females. We have higher pitched voices, and wether we have more or less we have pretty much the same body… however talented. And (when it comes to) technique, and writing skills… if I can be compared to greats across the board, I would consider myself blessed.

AB: Continuing with the theme of boxes, I know you’re not a fan of being boxed in by nationality, but why did you pick the name Snow Tha Product, aka Snow White, if you knew people were then going to assume you were white rather than Mexican?

STP: I actually picked it BECAUSE I’m Mexican. I’m pale in comparison to my brother and other friends, so being that I was the pale one I went with that name. It really started as a joke. I just didn’t have a rap name so I went with it. But I don’t want people to think I get offended when they call me white. I just like to let people know exactly who I am. Other than that I’m good. The whole race card shouldn’t play a part anymore. I mean, it does, but I don’t think it should.

AB: Agreed. Now let’s get into your music. Your mixtape is titled Unorthodox. What about you, both musically and otherwise, do you consider to be unorthodox?

STP: Well, I’m not exactly what you expect if someone said, “I’m bringing a rapper friend for dinner.” If I showed up people would be thrown off, and that’s pretty much Unorthodox. Growing up, I was always the hyper, A.D.D.-having, crazy, random girl, with crazy hair, and playing with the boys. I always felt awkward cuz I wasn’t into the cheerleading, or the ballet, I wanted to make music, and play sports. I liked boys, but they were my friends, so even THAT made me feel like I was unorthodox. Just the feeling of not being normal, or what people think is normal.

AB: Why are you riding an elephant that’s wearing Nike sneakers on the cover?

STP: My friend C Reyna actually drew me as a cartoon like three years ago. She asked me what I wanted in the cartoon. I have always thought fat animals are funny, and I picked an elephant, and threw in the Nike shoes to top off the awesomeness {*laughs*}. My mom worked at a bakery in San Jose, California, called The Pink Elephant, so maybe it’s some deep down thing that makes me like elephants, cuz of my mom’s former job. I don’t know, they make some bomb pan dulce.

AB: Nice! Gettin back to those elephant’s Nikes… are you a sneakerhead, and if so, do you have a favorite pair of kicks?

STP: I LOVE SHOES, but I have met some serious sneakerheads and they will hunt me down if I claim it and don’t have at least 100 pair {*laughs*}. In all seriousness, I DO love shoes. Lately I have been wearing a lot more Chucks because on an indie budget you have to kind of keep the budget tight. It’s either this Roland keyboard I want or a couple shoes, so I go with what I can, but I DO LOVE my Jordans, and dunks, my spizikes are pretty comfy, and the all black 4s are, too.

AB: When you released Unorthodox, and all the videos, what were your original expectations and how have you been handling exceeding those expectations?

STP: I feel like releasing Unorthodox… I was hoping for the best, but didn’t know what to really expect. But yeah, the opportunities that have been presented to me lately are awesome! I can definitely say this is opening a lot of doors, and still more to come since we have four more videos coming soon.

STP: Thank you! And, well, I mean I am not “model” type beautiful, but I can say that sometimes looking pretty decent in rap is actually bad because people don’t take you seriously, or they think someone ghostwrites for you, or no way you could do what you say in your rhymes, and all that. Not to mention the guys in this industry who are dogs, or the people who ENDLESSLY TELL ME “SEX SELLS” and I should show more skin. But I want to make an impact with my music, so I hope people can see me as an artist, and respect my craft.

AB: You’re still young, in your early twenties. Have you been asked to any high school, or college, dances since your videos blew up? Might we see you at a prom sometime soon?

STP: I actually didn’t go to my prom, or any of that, so maybe one day I will crash someone’s prom, or someone’s college parties.

AB: Moving from prom dresses to a totally different kind of outfit, can we talk about the Facebook picture of you in the hot dog costume? What was going on there? Do you have a side gig we should be aware of?

STP: {*laughs*} YES!! Nah, I actually was just doing a part in one of my music videos, and yeah, I like to wear costumes. They are fun. When I was in high school I would randomly wear a cow costume. There goes some of that unorthodox I was talking about.

AB: What were you doing before all this success came and what are the odds you would ever go back to that gig (or gigs, depending on how many you had)?

STP: I have had many jobs, but since right after high school my focus has been music. I don’t really see any other way around it. I do want to do a lot of charity work. I know that for sure. Other than that I want to branch out and do all kind of music, and entertainment business moves.

AB: Finally, will Snow Tha Product ever sample, or collab with, the “Informer” himself, Snow, and blow my mind?

STP: {*laughs*} Maybe if he let me use the name. If it was up to me I would love to just be Snow, but that name is taken, so I had to add something to it. But yeah, I get a lot of “Informer” jokes, and random lyrics from his song.