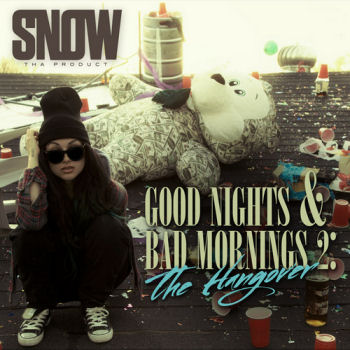 Claudia Feliciano, aka Snow Tha Product, isn’t your typical rapper. For one thing she is Mexican-American, which is not an ethnicity that is well-represented in hip-hop. For another thing, she’s one of the few female rappers signed to a major label. More notably, she manages to mix street rap, club rap and real talk in a way that works. She can rap, she’s got good production behind her, and she’s got something to say. No wonder Atlantic signed her.

“Good Nights and Bad Mornings 2” is a sequel to her 2012 mixtape. If you missed that one, don’t worry, because “GNBM2” contains all the songs from the first mixtape, including the singles “Cookie Cutter Bitches,” “Damn It,” and “Lord Be With You.” She’s added 12 more songs.

Snow is at her best when she has loud beat behind her that allows her to let loose. She’s got an aggressive, rapid-fire flow, often rapping so fast that it’s hard to follow what she’s saying. “Good Nights and Bad Mornings” is all about going big Saturday night and regretting it Sunday morning, and Snow alternates between rapping about partying and wondering what the hell she is doing with her life.

“Let’s get drunk, so we can’t get blamed for shit
Take hella shots until we get the hang of it
A bunch of free bottles
Ain’t no sense in wasting it
We be drinking hella Hennessy and blazing it
[…]
See this is what you living like when you be making it
Some people like you and some people be fake and shit
But free weed mean free blunts to the face again
I’m going out of this world and I’m back in orbit
I be getting lifted and the weed is my forklift
We got hella substances and you can’t control it
I be spitting hella game cause I never forfeit
I be spilling hella beer on my fucking Jordans
Woke up with a mess that I can’t afford it”

The flip side of this is “Cash Rules,” in which she raps about the dark side of drug use:

“I’ll sip on a little alcohol and I’ll be dabbling on some drugs
I’m not telling you what to do, but if you haven’t then trust
Don’t do it, shit’ll get you fucked up
Or have you feeling numb once and you be falling in love
Aw man, you mean I don’t gotta feel no more?
You mean I can live in my head, dreams won’t get killed no more?
I can erase whatever happened and I don’t gotta deal no more?
I mean you can, but then you’re back and shit ain’t real no more
You gotta backtrack and shit, go back to where you left it all
Thought you left it all, but nope, this shit will get you lost
Now you’re right back but more depressed than when you left
You gotta ‘fess to the bullshit feelings of emptiness
And now you’re tripping, everyone thinking that you’re okay
But now you’re slipping, late nights you laying in your bed
And you start thinking, ‘How the fuck am I gonna matter?’
I wanna change but I need change, so I’m making my pockets fatter
Cuz the cash rules everything around”

In that sense Snow is similar to Danny Brown, another rapper who spends equal time rapping about partying and rapping about regretting partying. Snow also has a street element like Brown (she was Snow White the Product until Disney got mad), and her songs have the same sense of danger and recklessness. Just listening to “GNBM2” will give you a wicked hangover. You can just feel your stomach jumping and your teeth gnashing. Snow is less weird and hipster than Brown, however. In fact, on her clubbier tracks (“Hola,” “Damn It”) she sounds a little like Pitbull by way of Eminem.

Snow’s attempts to round out her sound and offer a more complex picture are admirable, and she gets it right most of the time. She’s never too preachy, and she doesn’t try to be a pop or R&B diva. She knows that rapping is her strength, and is content to go hard on the mic. She manages to hold her own against Tech N9ne, Trae the Truth, and Ty Dolla $ign. The only guest who seriously outraps her is Riff Raff, whose slippery flow has much more finesse than Snow’s. She has her clumsy moments which remind you that she is still working on her craft, and she sometimes struggles to adapt her aggro flow to more subtle production, like on “Bout That Life.” When she’s in her wheelhouse, like on “Party” or “Damn It,” she’s unstoppable.

While a lot of “GNBM2” is about celebrating, it’s always about celebrating success that has come from working hard. This sets Snow apart from many of her peers: she never makes it seem easy. She keeps mentioning the constant touring and recording that has led her to where she is, and she also raps about being broke and in debt, eating ramen and wondering how you are going to pay the rent. “Fuck the Rent” has a sad feel to it, as Snow tries to forget about the pile of bills she has to pay. Those moments of reality make the party songs that much better, because you know it actually means something to her to blow a couple grand on booze and drugs. She’s not Rick Ross, acting like it ain’t no thing.

Snow’s major label debut is set to drop soon. It will be interesting to see what Atlantic does with her. She definitely has talent and commercial appeal, but there is a roughness to her that hopefully her label won’t try to stamp out. Will they try to make her a female Pitbull? A Latina Eminem? A Latina Lauren Hill? If the video for “Play” is any indication, she’ll be able to keep her beenie caps and hoodies for the time being.

In the meantime we have “Good Nights and Bad Mornings 2,” the perfect mixtape for going to the club and trying to recover from it the next day. Snow Tha Goon proves herself to be a skilled MC who has more insight than the usual club rapper.