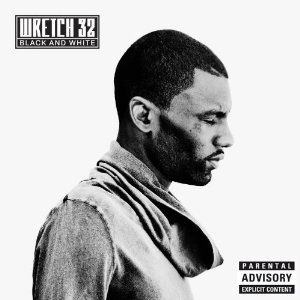 It seems whenever we cover “international” emcees we have the tendency to contextualize our coverage in terms of the particular country or scene that emcee belongs to. I can only imagine it must be quite frustrating for those emcees as I doubt American rappers get the same treatment. Certainly rap is as American as apple pie, but rap is also as universal as failure and success. Increasingly, these competing concepts tend to be the fuel for most “successful” rap music and they are not exclusive to the United States. Wretch 32 possesses equal parts failure and success. Though he consistently references his failures throughout “Black and White,” it is his current success that defines Wretch 32’s appeal. Yet, without his past failures to reflect on and draw inspiration from, Wretch 32 would not have found the success he has today. The challenge of balancing both those concepts is clear on “Black and White” and thanks to Wretch 32’s ear for interesting and catchy beats, the album is a success for the most part.

In years past, most emcees would include a biographical song on their debut album which would succinctly summarize the rapper’s life, challenges, affiliations, and character. In fact, such a song would likely pin point the city, neighborhood, street, and possibly even apartment building the rapper lived in. Today, rappers don’t feel the need to delve into such minutia. In fact, most rappers tend to generalize as much as possible in order to avoid alienating fans. Wretch 32 is no different as he presents us with little more than details of his life scattered through out the album. On “Please Don’t Let Me Go” he states:

“Now this is probably the first sign of madness
But as a little boy I was going through mad stress
I turned man of the house when my dad left
But I never had rent
Hit sixteen on a bad flex
Mom told me hit the road with my bags then
Yeah, I was going through a phase, never had sense
I was just acting
Cause I was close to a dead end
Cut school on your own with your friends then
I said I was cool, I was fending
I was pretending
But I thank her for all of that
Cause she taught me how to walk without falling back
And now I’m running full with no falling back
This is what you call a rap”

Wretch gives us enough information to sympathize with his situation, but doesn’t give us enough to alienate anyone. He implies he was left to be the “man of the house,” but concedes he “never had rent.” His lyrics are purposefully vague so they can appeal to anyone from children of divorce to children who literally had to work to pay the rent at a young age. Walking this tight rope allows him to appeal to the largest audience possible and he performs the routine well. On “I’m Not The Man” he once again refers to a hard childhood, but the larger purpose of the track is to address the concept of expectations, pressure, and stress that affect us all. That’s not meant to dismiss Wretch 32 as a generic every man rapper, but instead it’s meant to highlight his ability to make good music that appeals to all. “Black and White” is equal parts reflective tracks about the hardships of life and energetic songs meant to get the party started.

“Traktor” is the best known single off the album and features a bouncy beat with stuttering drums and a eclectic mix of synths. Rather than go with a typical “southern” sounding party track, “Traktor” uses similar elements but with a unique twist. “Never Be Me” features a similar combination of unorthodox drums giving life to synths and vocal samples that would not have stood out on their own. “Sane’s The New Mad” sports a beat that captures the title well as the synths are a dark cascade of hectic energy. The production stands out on tracks like this as it is different from the usual, but still captures the vibe of the respective songs perfectly. Even when the production veers into the pop and formulaic, Wretch 32 gives the tracks a cocky twist that keeps them from sounding cheesy. “Unorthodox,” “Hush Little Baby,” and “Don’t Go” are all tracks that would fail without the proper emcee to balance their pop melodies.

Overall, Wretch 32 gives us a fresh take on a common story. Some of the production may venture outside the realm of comfort for traditional hip-hop fans, but it provides a much needed reinvention of what popular hip-hop can sound like. Though the production is the strong point of the album, Wretch 32 is an emcee that is capable of appealing to a large audience without coming off as contrived or forced. The combination makes for an appealing album and should guarantee Wretch 32 continued success.