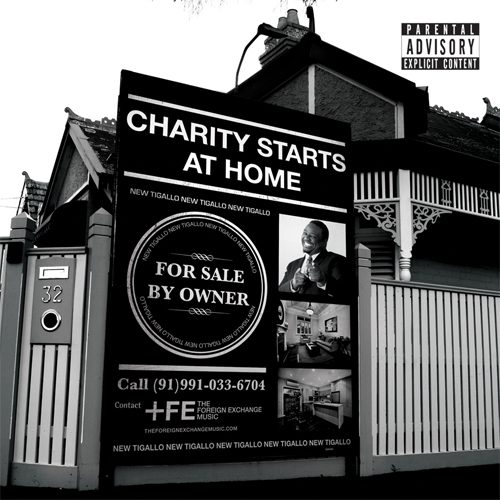 The value of Rapper Big Pooh and Phonte have decided it’s better to record on their own than as a team. The move was described as in the best interests of all involved, as Phonte himself once opined “If you’re doing business with a friend, you gotta decide, well, do I end this business relationship and keep my friendship? Or do I continue this business relationship and end up wrecking both?” You have to respect the wisdom, and understanding it makes it easier for fans of the group to check for solo albums. Don’t read too much into them not appearing on each other’s albums – the emcees need room to grow and explore their own voices.

One benefit of that separation is that it appears Phonte and 9th Wonder now have a less acrimonious relationship. I’m not sure what in the group dynamic made it hard for all three to get along, but with that dynamic gone 9th produces four songs on Phonte’s first solo album “Charity Starts at Home.” In a wry twist of coincidence, the first song the two do together is called “The Good Fight” – and they had their share on Twitter. There’s magic when they’re working together instead of beefing though, as 9th layers up soft R&B samples, crystal clear drums, strings and melodies into a deluxe harmony. Phonte matches his production with some frankly honest hip-hop lyrics:

“My single friends say ‘Tay, your family’s beautiful’
I’m like, ‘If y’all niggas only knew what it cost me’
This shit don’t come with no blueprints
and with every change it seems more like a game you could never win
I tell my peoples I ain’t rich
but this harvest is the farthest from broke a nigga ever been
‘Go and live out your dreams,’ that’s what they tellin
Fam in my ear all day and they yellin
‘Keep it real Tay and don’t ever sellout’
But what the fuck is sellin out if ain’t nobody sellin?
Shit… tired of playin wit y’all
I wanna fight the good fight but it ain’t payin me, dog”

Khrysis is just as capable behind the boards, and he gives the subtle synthesized harmonics and bass that allows Phonte to vent long pent up frustrations on “Everything Is Falling Down.” Although he doesn’t have the Illa-del crimi-NAL flow of Black Thought, one can certainly grab a similar vibe from their mutual frustrations with a corporate music world:

“Anybody on his bad side, God save ’em
Late night by the bedside, God, praise Him
He’s the +Captain+ that told me +Tenille+/to kneel
And when I was surrounded by them monkey-ass niggaz
He told me to peel, broke free of my deal
and left shackles, racin like Petty in the stock
Now he heavy on the block like guards and left tackles
See where I come from and, you and yours are up in arms
like gunrunners, and you are confronted with
99 problems and can’t keep it 100
Then at the day’s end you ain’t really done nothin
I made a new lane for myself and said, ‘Fuck it’
Why +Rage Against the Machine+ when you can just unplug it? F’real”

This is not 12 songs of bitter acrimony though – far from it. Songs like the lovely Stro Elliot produced “Sendin My Love” featuring Carlitta Durand are a smooth melodious to making relationships work, even when it seems like the hardest thing in the world to do:

“Wifey wants a scholar and a traveler
Hunter and a gatherer, and after I capture her
Now I gotta put +MY+ spear up?
Man, I don’t fear much
But the thought of losing her hits me in the tear ducts
Too much honesty ahead, get earplugs
Something in the way society rears us
Commitment wears us, out it tears us, apart
and makes us feel we don’t need to
and that turns into ‘I don’t need you’
People want what grandma and granddaddy had
But they ain’t have options, nigga, we do
and we choose, to act foolish
Not Jewish, but when you hurt a man
baby he bruise/He-brews”

That’s only part one of the story – the song that follows “Ball and Chain” is the contemplative part two. To say Phonte is a man full of complex emotions about his life and his relationships with people in it would be a severe understatement. He’s the kind of emcee who wears his heart on his sleeve, for better or worse, sharing the whole gamut of what he feels with the listener. When he can channel those emotions into braggadocious rhymes there seem to be few who can fuck with him, which is probably why he’s paired with Pharoahe Monch on “We Go Off” – somebody who can be on his same level lyrically:

Tigallo: “It’s lookin like school and I’m the invincible principal
Joe Clark and you niggas sign in, get a late pass
Yeah nigga, I go boss, ’cause once the buzzer go off
Don’t nobody give a FUCK what you ranked as
It’s only wins and losses, Benz and Porsches
So pardon if I offend any friends or sources
that never seen the hunger, no, meager portions
Starvation, bar none like Klondike
They sayin Phonte’s the incarnation of verbal murder
Pin it on me like prom night, nigga”

Pharoahe: “Pharoahe the god strike the mic hard like Ty Cobb with a bat
Physicist, the antithesis of Steve Jobs when he raps
Smack, sick gonorrhea, CLAP~! Onomatopoeia
{*smack*} Smack the shit out you, you have no idea
Send a stranger to rearrange your Range Rover, key your Kia
P’ll see ya via satellite with money +Longer+ than Nia’s
FUCK chivalry, I will end a chick’s career
and +Return to Forever+, I am Chick Corea
At O’Hare Air will surface to air missiles for your Lear”

There’s definitely a lot to like about “Charity Starts at Home,” but it’s fair to say that it is uneven at times. There are no tracks that sound like huge mistakes or mediocre phoned in efforts, but some beats do seem to shine brighter and inspire Phonte a little more lyrically. When listening to the album multiple times songs like “Dance in the Reign” and “The Life of Kings” (featuring Big K.R.I.T. and Evidence) rise up higher in replay value, while songs like “Gonna Be a Beautiful Night” start to sound like cheesy overproduced 1980’s R&B.

That’s one of the other deficits of this album – Phonte can’t resist the urge to sing on tracks like “To Be Yours.” It’s not unprecedented, he’s done this before on Foreign Exchange albums, but many listeners may prefer he kept it there instead of bringing it here. It’s cool that he wants to experiment, and he’s not even that bad of a singer, but most listeners who buy a Phonte solo NOT marketed as a collaboration with Nicolay would probably prefer rhymes to crooned tunes. This is an overall above average album that needed a little more of something – a little more 9th Wonder, a little more swagger, a little more about the world of today – and possibly just a little less angst.