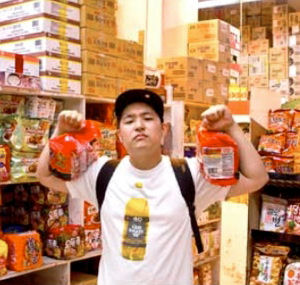 Rekstizzy :: Fake It Till You Naked

Newcomer Rekstizzy is counting on making a statement with the artwork of his album before you even hear the statements on his album. While in the old days that would work to his detriment on “Fake It Till You Naked,” given the modern era of digital distribution he might do just fine. Many people will only look at that hairy photo only once for about five seconds when they get the download then completely do away with it. I’ll go one further – you know that Biz Markie service they keep advertising on TV to tune up your iTunes playlist and fill in missing song names and cover art? Nobody’s going to use it for this one. In fact if you like use the alternate cover I created for this review if you download his album – it comes from his official press kit. Nonetheless I applaud the artistic statement he chose to make even if I don’t find it aesthetically pleasing.

The music of “Fake It Till You Naked” is much easier to appreciate. The album is an East to West collaboration, pairing Queens native Stizzy (whom we’ll refer to that way to avoid confusion with Boston rapper Reks) with California producer YoungHoon Beats. I confess complete ignorance of either one before being sent this project, but quickly found myself drawn into Stizzy’s absurd world. Try to picture the self-confident pimp swagger of J-Zone meeting the laid back stoner humor of Alkaholik left turn, and you’re pretty close to getting the steezo of Stizzy. He’s either condemning or celebrating being “Drunk in Public,” but more likely, he’s doing both at the same time:

“Yo I hate my addiction, to late night drinkin
In the daylight, limpin like a snake bite victim
I admit I’m wrong, and I gotta change
But once the liquor’s gone I went out and got a tank
Some more of that sweet stuff up in my liver soakin
Cause this club ain’t shit but when the drink is pourin
it’s a celebration bitches, six in the morn’
Or until we black out and my vision’s gone
But so are all my worries…”

Alcohol is not an infrequent refrain on “Fake It Till You Naked.” It plays out like a Hollywood movie on the hard slapping, slow tempo bass instrument and drum laced track “The Hangover” with Buddha One. Sobriety is clearly not a factor in “Drunk Dial” either, which opens with a mournful harmonica, then lopes along like the last call at a cowboy watering hole. “AA Meeting” is a bit of a surprise though, because the true meaning of the song is “Assholes Anonymous.”

“Dude I’m shameless, attitude heinous
Mind in the gutter with my eyes on the anus
If my girl’s high maintenance then I’ma make sure
(What?) ALL OF HER SHOES IS FROM PAYLESS
Cause I don’t beg, don’t crawl
Don’t make enough ends, for us to be goin to the mall
(FUCK THE MALL!) And most of y’all claim independent
But if you see a sucker with a nice car
you cling on and spend shit; I offer no incentives
(NO DEALS) Please don’t be offended (GO CHILL)”

Stizzy walks a fine line of humor with his misogyny and misanthropic ways, but largely veers toward the comedy side and stays away from going to a dark place that would make him a real “Asshole.” Instead Stizzy’s style is all about the “Good Times,” declaring that he’s “the new Slick Rick” and bragging “I’m five foot nine – STILL slam dunk.” With so many new rappers coming out on their first album trying to prove how damn hard they are, the whimsical bouncing track “Swingin'” is a nice change of pace. What’s funny in a non-humorous way though is how an emcee who’s not trying to prove how great he is lyrically actually comes off as a pretty damn good lyricist. I don’t know if Rekstizzy would win battles in a cypher, but I do know that out of 14 tracks not once did his punchlines make me wince (leave that to the original cover art). He’s even a pretty good storyteller, as evidenced by songs like the closer “Amazon.” Ultimately “Fake It Till You Naked” is one of those Bandcamp “name your own price,” and if I had to put one on it I’d say at up to $8.99 you’d be getting more than your money’s worth. In fact two dollars more wouldn’t be unfair, but I’m a cheap bastard.

Rekstizzy :: Fake It Till You Naked
7.5Overall Score
Music8
Lyrics7