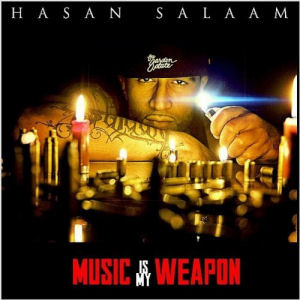 Hasan Salaam :: Music Is My Weapon

After last week’s Hasan Salaam interview by Adam Bernard, I was intrigued enough to delve more deeply into the New Jerseyite’s rap career. While “Music Is My Weapon” doesn’t actually hit stores until December 6th, a call to the same publicist who set up the interview got us an advanced promo copy of the album for review. Salaam proves to be just as outspoken on the beat as he is in print. It’s not long into the opener “1911” before he busts a verbal cherry and leaves the blood stain everywhere. The jazzy sounds in the background are both compliment and contrast to the vitriol he has for today’s era of hip-hop:

“I rock and roll for the soul of my ancestors
And built my dynasty without the masonic hand gestures
Yeah! This is church right here
Young, black, don’t give a fuck, America’s nightmare
Next level, I’m a rebel with a cause
And y’all can’t say two words without ‘no homo’ or a ‘pause’
Heard your bars and I’m somewhat appalled
So clappin at you got nothin to do with no applause
Yo – so memorize this slogan
Whores drawers and laws was made to be broken
Honestly, what the FUCK are y’all smokin?
Hip-Hop must be dead with the shit that y’all promotin
V-Nasty sayin ‘nigga’ ain’t the first for a rapper
But it’s ill how ignorance make her think that she blacker
(Think about it) Comin out like ‘race don’t matter’
But it’s WHITE GIRL MOB like the Ku Klux chapter!
Bitch, I ain’t drinkin the Kool-Aid
Whoever co-signed is just a new age slave”

A cynic would suggest that V-Nasty is an easy target and that calling out the White Girl Mob is a quick way to get attention since they’re popular right now. There are two problems with that theory. The first is that he’s calling out whack rappers in general including everybody who says “no homo” in their raps, and the second is that there’s nothing incorrect in his point about V-Nasty – she’s ignorant as hell and proud of it. I’m not saying that’s not occasionally entertaining, because the same can be said of a dozen other dumb rappers, but most don’t cross a well established cultural line in the sand and then act like they’ll get a free pass for it by virtue of having a pair of tits.

So early on in “Music Is My Weapon” Hasan Salaam has got my attention. He’s got the rhetoric of a young Chuck D, without having the commanding baritone of Carlton Ridenhour. His voice is actually pretty husky and dusty – it reminds me of a deeper Plies sans the Florida accent and the squad of goons. Cross that idea with Immortal Technique’s tone and bluster and you’re getting a close approximation. Salaam is a deft raper for dolo – songs like “Chaos Theory” prove he can launch an all out assault on mediocrity without needing backers.

“I appear courtesy of nothin except my parents fuckin
Ragamuffin been up in mo’ drama than David Ruffin
Lightin and puffin, fightin and fussin
I beat the pussy, I give cunts concussions
90 percent of these rappers ain’t sayin nothin
So I’m cuttin off the bullshit, end of discussion
Bumrushin the stage shows swifter than Kanye
Screamin ‘Fuck the world and your moms'”

Screaming might be how his voice got that rough in the first place. He does OCCASIONALLYlet his vocal chords get a little bit of rest though. If you were under the impression he’s anti-caucasian from the album’s opener then “The Letter” featuring Eternia will be a wake-up call. The only thing Salaam is anti is anti-stupidity, and there’s little question Eternia ranks up there with Psalm One and Jean Grae as among the hardest and smartest female rappers spitting today:

“I look up to the heavens and I breathe ’em in
I know you got a story written for me better than
anything that I can pen well imagine it
Imagine how I put you on hold, let me pencil in
Time for the reverent, present is precious yet
I left your gift unopened like it never sent
Didn’t read the card with the packaging, like a kid
I deserve what I get, look at what I did
I treated my true love like an irritant
You picked me while I was pickin some insignificant
cats that could never compare to your magnificence
Everyone pales when they’re next to your presence…”

“The Letter” is thus her story of apology to a worthy man, and Salaam’s verse after the chorus comes across like his response, making them a uniquely well met combo like Yo-Yo and Ice Cube or Talib Kweli and Jean Grae. Salaam does find room for a few other contributors on “Music Is My Weapon” here and there. Chace Infinite, Reef the Lost Cauze and Steele all appear on the posse cut “Shining.” The mellow piano keys of “All Roads Lead Home” are joined by One Eyed Kings, and even though a rapper like Steele would have been a good fit on “AK-47” it’s Badsportt and CF who exercise the 2nd Amendment.

Production on this short but dense 36 minute release is handled by the Snowgoons, who give tracks like the aforementioned “AK-47” the appropriate amount of menace and supporting samples when needed. It’s hard to pick out any songs that are “bad” per se, but ones like the heavy bass and guitar laced “Miss America” and the harmonies and strings of “Musical Chairs” are definitely among the good. If there are any other contributing producers on this album they’re not credited on my copy of the album – it says “produced by the Snowgoons” and I’m going to take that at face value. You should too since they’re rarely involved in any hip-hop that you wouldn’t want to listen to, and when paired with an intelligent and articulate rapper like Hasan Salaam, it makes for quality music. Even though he likes to brand himself as controversial the only real controversy would be saying that his “Weapon” is not fully loaded and accurate. This 9 song album is a promising start.