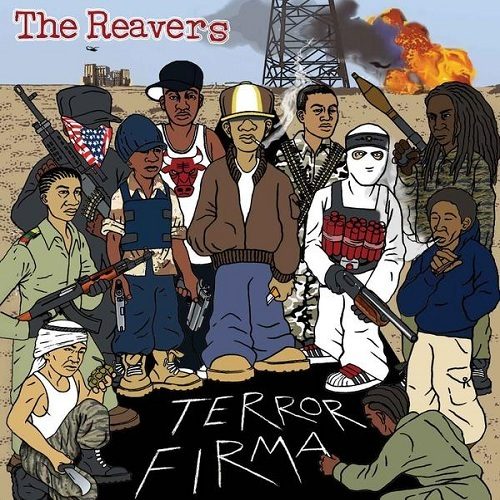 When I got this album and read through the group’s profile, I was slack-jawed. The Reavers are a new “super-group” comprised of eleven reputable emcees. What makes this lineup so impressive is the wide-range of PROVEN artists. Members include:

Up-and-comers Keith Masters, Goldenchild, Priviledge, and Billy Woods round out the Reavers. Now that’s a lineup you don’t wanna mess with. Unfortunately, along with major hype comes high expectations. With a crew this deep, how could you go wrong? But as the expression goes, “that’s why we play the games.” “Terror Firma” is a mediocre album that plays out more like the disappointing 2004 Athens Olympics basketball “Dream Team” than Magic, Michael, Larry, and the rest of the boys of Barcelona.

The problem is that the Reavers (Revolutionary Emcees Advocating their Views on Everyday Reality Struggles) try to be the solution to all problems. As their one-page states, “â€˜Terror Firma’ is a concept album like no other, with eleven very different emcees, uniting to do battle with the status quoâ€¦the result is a bloody eye on our world, tackling everything from war, politics, and poverty to the age-old question of â€˜who got skills?'” Damn, that’s a lot to battle with one album. Combine that with their abstract artistry and it’s impossible to figure out what the Reavers actually stand for. Where’s the â€˜concept’ of this concept album?

Besides a very broad, freakin’ GIGANTIC target (honestly, how you gonna defeat â€˜status quo’?), there are a handful of reasons why the Reavers and their project go astray. The production isn’t horrible, but it’s definitely lackluster. I can’t name one instrumental that actually stands out. Also, the headliners (Vordul, Pacino, Akir, and the Czars) are either not at their best (Vordul) or barely on the album at all (Pacino, Akir, Czars). The guys with the most airtime are the lesser-knowns and their inexperience is a death sentence for the album.

Lastly, and perhaps the root of all the problems, is that there is no chemistry within the Reavers. What do you expect when you bring together a mish-mash of established and unproven emcees in the middle of their careers and expect them to be a cohesive unit? No wonder it sounds like a compilation. Any Wu-Tang comparisons are laughable. Despite their unique styles, Staten Island’s pride and joy were still linked naturally by blood or childhood relationships. The Reavers may have similar goals, but that’s not enough to develop a real bond, at least not over the course of a few months for a rap album. No chemistry equates to a bland, deprived end product.

While I may be overly critical of the flaws in “Terror Firma,” it’s mainly because I truly believed this could’ve been something special. There are plenty of recent albums that have been worse. Believe me, I know. The album’s singles (“Slums,” “America,” and “Dusted”) are worthwhile tracks and should be considered by indy DJs for purchase. But the album overall is pedestrian, a far cry from what could have been. So much unfulfilled potential. By fighting the status quo all at once from different angles and different voices, the Reavers ended up stretching themselves too thin. Essentially, “Terror Frima” is a run-of-the-mill compilation album labeled otherwise.