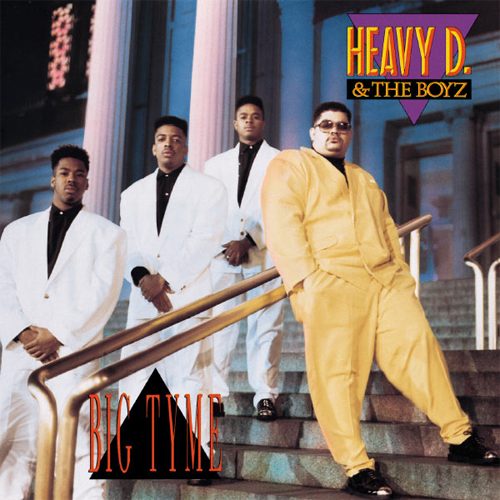 Everything I would have said about the Overweight Lover exactly a week ago now has to be written in the past tense, and I can’t begin to tell you how much I regret that. Dwight Arrington Myers b/k/a Heavy D was that rare and unique commodity in hip-hop – a rapper loved and respected by the hardcore while simultaneously blessed with commercial success. Perhaps it was his affable personality, a self-described “lovable and huggable” charm, that won over even the most ardent critics of pop rap crossover. Perhaps it was the banging beats from his “Boyz” and the turntable wizardry of DJ Eddie F that gave him street cred. Maybe it was even the fact he had a style and grace not normally associated with extra large emcees – he looked dapper in a suit and could dance his ass off to boot. In many respects he paved the way for the crossover success of artists like Christopher Wallace, and you won’t need six degrees of separation to connect the two together – thanks to Uptown you only need one.

To me though all of that really only scratches the surface when talking about the appeal of Heavy D. Everything in the first paragraph is dead up – fellas thought he was fly, ladies thought he was cute. He had a debonaire style and flair like no other. He made being big sexy, but he also made it suave, and if you’ve never seen him dance just watch his performance from this year’s BET Hip-Hop Awards. I think all of that pales in comparison to one simple fact – put a mic in his hand and Heavy D was THE MAN. There was a time in East coast rap history where it seemed like every album gave him a shoutout – in a song, in the liner notes, or often both. It’s exaggerating to say 100%, but it’s also downplaying things to not note how influential he was. The Hevster had a unique ability to get his point across in a cool and composed way. He didn’t need to be excessively loquacious to prove how smart he was, or use a lot of profanity to get your attention – he had his own thang:

“Pumpin in stereo, people said here we go
A cutie down in front said ‘Heavy, you’re my hero’
Understand this, before you make a comment
There’s always a meaning, in a Heavy D statement
In this life, I strive for improvement
Be your own guide, follow your own movement
Love is a legend, me I’m legendary at it
Flippin on the mike makes me a rappin acrobat
Don’t try to swing, cause you couldn’t even HANG
(Yo…) we got our own thang”

The Teddy Riley produced “We Got Our Own Thang” is in many respects prototypical swingbeat (new jack swing) music from the late 1980’s and early 1990’s, but that’s not to Heavy D’s detriment in any way. It was just one of many styles the big man could flex to on the microphone, as his natural confidence made him a versatile artist. As suave as he was when macking to an upbeat track you could dance to was as cool as he was when flowing to a slow funky Grover Washington Jr. sample looped by DJ Eddie F on “You Ain’t Heard Nuttin Yet.” He exudes an unbelievable amount of confidence that’s remarkably absent of arrogance, and it’s quite marvelous:

“How could I explain to ya, the HeavMania
Tryin to figure a way to make it simple and plain to ya
Hmm, I’m the Heavster, a rap register
that flows with cash so fast you can’t measure the
intent of content that I rep-a-re-sent
The format of my rap from past to present tense
Girls they adore me, they scream for me
Fellas get jealous cause the ladies won’t ignore me
Ov-er-weight Lo-ver em-cee, H-E-A-V-Y D
Rap champion, ask Nick and Damian
Joe Black, Pete Rock, Billy Bob and they’ll explain to ya
who is the greatest, the biggest, the baddest
They won’t front, they know the Heavy D status”

And yes if you know not and you’re wondering, that’s the same Pete Rock you’re thinking of – the one who rose to fame in the early 1990’s with C.L. Smooth by his side. They both hail from Mount Vernon, and in fact he’s Heavy D’s younger cousin. There’s an amazing line of dominos that may never have fallen into rap success had Heavy D not risen in prominence. Even in my own life I owe Dwight a debt, because the first rap magazine I ever found in my youth was a copy of The Source with Heavy D and 3rd Bass on the cover back in August 1991. I still remember what it said and the words seem tragic right about now: “Heavy D on love, death, and the new album.” 20 years gone by in the blink of an eye. At the time the words referenced the untimely death of his friend and dancer Trouble T-Roy, but the line seems eerily coincidental given he just released his first album in three years and it’s titled “Love Opus.”

Heavster always believed in love, and he always had a bit of raggamuffin roughneck in his flow, both of which can be heard on “Big Tyme” on the Eddie F produced “Mood For Love.” That was one of the other reasons it was hard to hate on Heavy D then or now. Even if you wanted to be jealous of his success, or upset that he wasn’t representing a militant and political hip-hop agenda, or felt he was crowding out underground rappers who deserved the same shot he got, Heavy D was never a negative artist. It wasn’t just that the Overweight Lover wanted to get with the fly cuties – though there’s no question he was a sexual dynamo. One only needs to listen to songs like “Somebody For Me” or “Gyrlz, They Love Me” to figure out his prowess between the sheets:

“Coolin in my crib and I’m cold, maxin
Call up a cutie, I’m in the mood for relaxin
Get my phone book from, top o’ the shelf
I’ll dial 66 – hm, I better keep it to myself
Call up a cutie with a triple star next to it
She says, “Hello,” we con-versate a bit
Invite her over for a candlelight dinner
Believe me when I tell you that this girlie is a winner
Shortly after that, I hear the doorbell ring
Turn on the radio, Anita Baker starts to sing
Open up the door and I kiss her on the cheek
She’s so nice, polite, petite, so sweet
Sit her on the couch and uh, remove her coat
Squat next to her, *ahem* clear my throat
Whisper in her ear, told her what she wants to hear
Let her know to have no fear, Heavy D’s here”

Heavy also had love for his fellow man woman and chid though – of all races, colors, and creeds. The self-produced “A Better Land” expressed his hopes for all of humanity to come together in positivity:

“On the news, bad news is all the news you’ll ever see
The rich gettin richer while the poor still live in poverty
I don’t understand why you can’t lend a helping hand
to another man, who is your brother man
Times must change, now here’s the plan
Let’s make this land a better land”

There’s no question that at the end of the day whether on the dance floor, on the microphone, or on the late night mission to get lovin’ that Heavy was figuratively and literally about “More Bounce.” That was Heavy D, tons of fun on the mic, and when he swung it around you couldn’t help but groove. Other than EPMD’s “You Gots to Chill” this is literally the best use of this classic Zapp sample imaginable, and when listening to songs like this classic you come to regret the litigious and expensive sample era of today:

“Check eight seven six five four three two one
Money earnin Mount Vernon, is where I come from
This rap is an article, started from a particle
Hipped up, hyped up, hemmed up, to be historical
An overweight rubbable, squeezably lovable
Ladies come to me and say, “Heavy you’re so huggable”
Not only am I huggable, but I’m quite enjoyable
When I answer the joint you see I’m rather unavoidable
Plus that means attainable, all my niggaz that’s got cable
Rope chains, gold chains, the victory explainable
MC’s in my path I will steadily pounce
Heavy D’s in effect.. with more bounce to the ounce”

Heavster usually found a way to flaunt his success without seeming to be excessive or ostentatious about it – he’d mention a gold chain or watch here or there yet not constantly brag about his wealth 24/7 or have to throw bags of hundreds in the air to prove he had so much he could throw it away. That’s the final aspect of Heavy’s success – factor in his simple and effective rhyme style, his smooth appeal to the ladies, the fact he could jam with the best of them and yet still remain humble and likable made him an absolute force in hip-hop from 1987-1994. Saying he was one of rap’s biggest stars in that era is in no way a double entendre on his size – it’s just the truth. As the rap career waned, his acting career and behind the scenes work grew, so Heavy D was always around in some form or fashion long after his artistic peak. I mistakenly assumed that he always would be, but like so many of my childhood idols, he’s not here any more and there’s nothing I can do but shed a tear, pour out a beer and move on.

Thankfully albums like “Big Tyme” are a good way to reminisce over Dwight. Even Marley Marl got in on this action – he produced “EZ Duz It, Do it EZ” and “Here We Go Again, Y’All” among others. Unfortunately this is another hip-hop classic that needs badly to be remastered. As noted in my “Living Large” review five years ago, this is another album in MCA’s catalogue that was “transferred from analog tape and therefore may contain some tape hiss.” Now it’s not like the technology to do it right in 1989 when putting it on a CD didn’t exist – it did and they were just being either cheap or lazy. I don’t just expect them to remaster his catalogue in the wake of his untimely demise, I DEMAND that they do so. Trust me this was good enough when I bought the album years ago and would be to you if you bought it now, but it could be so much better and it should be. Let’s pay Heavy D his respects and polish this gem up to its brightest shine. In the meantime if you find it used don’t pass up “Big Tyme” – it’s a classic.