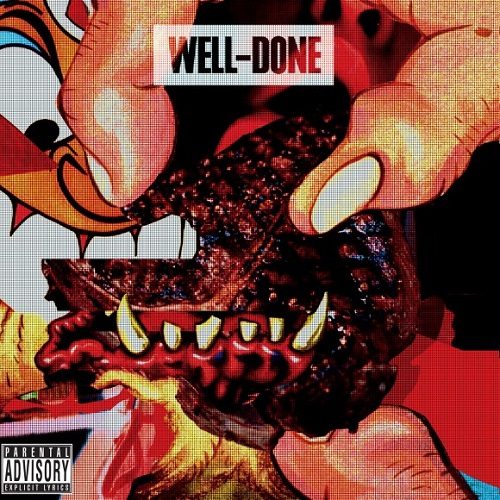 When Aaron Boyce covered Action Bronson’s “Dr. Lecter” he admitted Bronson’s voice did evoke memories of Ghostface Killah, but concluded Action Bronson’s “high-octane delivery, street smarts and sense of humor will win over any listener willing to dismiss him as another Ghostface clone. ” After first encountering Action Bronson on Statik Selektah’s “Population Control” compilation, I’ve had the opportunity to get further exposure to his music through his full length collabo with Statik Selektah. After a full album of Bronson, I’ve come to conclude that in fact his “”high-octane delivery, street smarts and sense of humor” are the reason he’s gained a fan base, but this is not a wholehearted agreement with Aaron Boyce’s assessment. In fact, that exact phrase could be used to describe the very reasons Ghostface Killah became popular in the first place. Ghostdeini’s style is defined by its clever mix of humor and street smarts delivered with unrelenting energy. The similarities don’t stop there, as Action Bronson constantly relies on the same delivery style in delivering rhymes. Seemingly random references often end thoughts and his style is at times just as free-flowing and loose as Ghostface’s. I know Action Bronson’s background story revolves around his 9 to 5 at a restaurant, but even the constant food references do nothing more than remind me of Ghostface’s penchant for baked ziti, among other foods.

To be clear, my purpose is not to discredit Aaron’s assessment or dismiss Action Bronson’s music as derivative. Instead, I merely wish to point out that the defense of Action Bronson as more than a Ghostface clone has been misguided. Action Bronson is a Ghostface clone, regardless of whether it was by design or mere influence, who has a remarkably similar voice to the man he channels. The difference here is that Action Bronson is no Blac Haze, Top Dogg, Tha Realest, Guerilla Black, or Shyne. His purpose is to build his own fan base and reputation and not just to deliver a cheap imitation of another famous rapper and exploit vocal similarities. Who knows, maybe these aforementioned rappers had similar intentions when they first picked up a mic. In Action Bronson’s case, he’s succeeded in ways these other rappers have not. As circular as the logic may seem, the mere fact his fans are vigorously defending him from charges of being a Ghostface clone speaks volumes to the headway he’s made on the underground hip-hop circuit. Misguided as it may be, that defense scratches the surface to what is an underlying talent that makes Action Bronson a dope emcee in his own right. To put it succinctly, it takes talent to do what Ghostface does. By this I don’t mean filling blog post with nonsensical ramblings and signing them “Ghostdeini.” What I mean, is that out of the 100s of rappers one might try to channel on the mic, Ghost’s abstract style would probably be the most difficult to get right. It takes talent to come up with his mix of abstract, witty, silly, crazy, street lyrics and deliver them in a way that makes them appeal to a large fan base. Action Bronson does this and does it well (pun not intended).

After a very large roundabout, this finally brings me to the subject at hand, “Well Done.” The album is good. Very good. Quite possibly great? Maybe. Statik Selektah beats are not the novelty they were 12 months ago, but when it comes to collaboration albums this might very well be the best we’ve seen from the Lawrence, MA native. Statik rounds up the usual suspects for this affair: simple, but hard hitting drum patterns; jazzy horn samples; expertly scratched samples. The results though are a bit more hard hitting than usual. The horns on “Cocoa Butter” flutter over the beat with just enough energy to complement Action Bronson’s style. Nina Sky on the hook only makes the track sweeter. On “The Stick Up,” Statik combines slow, yearning vocal, horn, and guitar samples for soulful selection that is sure to stir up emotions. Statik even brings latino music samples into the mix on “Miss Fordham Road” as the frenetic bounce of salsa music is slowed down with positive results. Musically, the missteps are very few and far between. Of those, “Keep Of The Grass” is the most glaring example. An attempt for a hardcore, raw track in the spirit of MOP fails as a boring sample is merely repeated for the entirety of the track and a Big Pun sample is wasted here on the hook.

Lyrically, Action Bronson skillfully bobs and weaves over the robust collection of beats provided by Statik. “The Rainmaker” is the embodiment of the blues presented in rap form as Action Bronson drowns in his sorrows:

“So now I’m smoking and I’m stuck in a daze
Hear the music of the waves, silence, stuck in a cave
Searching for daylight, I promise that I changed before I see the grave
Never that, fingers crossed
Every day it seems I’m talking to the wall more
Hallucinations bug me, digging up the floor boards
Set me free to a life without anxiety
Every day I’m moving further from sobriety
No one helped me when my life was in a spiral
Situations for the money, cause the dough dire
Kids are hungry and they need an education
But mommy needs a leather jacket for these seven bracelets
Facelift, don’t forget about the basics
Don’t ever trust a fucking fake bitch, understand me?
Now I’m something like a pyro, I’m on fire
Blow a tire, choking victims with a short wire”

“I smoke drugs as if they cigarettes
Popping like a gigapet
See my silhouette
Right behind me bitches pirouette
That’s a dance move, it’s origin is French
I’m chilling in the park with several walrus on the bench
…
Catch a rooster, cut his fucking nuts off
Serve him for a hundred dollars, sesame or plum sauce
Try to dip the bill, the Mexicans will let the guns off
Cut you with a pleasure, similar to getting nuts off”

While far from your conventional rapper, Action Bronson is still able to appeal to most hip-hop fans by tempering his abstract rhymes when needed. Tracks like “White Silk” serve as an opportunity for him to spaz out on the mic and deliver lyrical verses for the hardcore fans. However, most of the album features tracks like “Time For Some,” The Stick Up,” and “The Love Letter,” which are focused and complete songs that stick to a central theme/idea. Like Ghostface, Action Bronson’s appeal is his ability to seamlessly blend abstract and dense lyricism with conventional rhymes.

Overall “Well Done” is a shining example of what collaborative albums should be. Both Statik and Action Bronson approach the project with energy and purpose. Statik gives us his best collection of beats so far this year. Action Bronson takes advantage of the opportunity to showcase his talent. In an ideal world, fans of both artists will come away happy with “Well Done” and each artist will gain new fans. If you are unfamiliar with both artists, I couldn’t think of a better place to start.