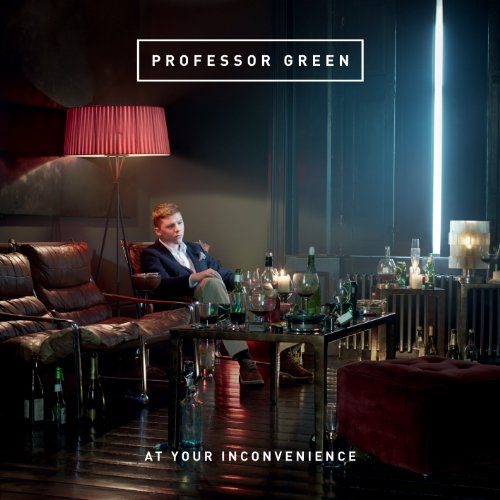 Professor Green :: At Your Inconvenience

The problem with UK music critics is that they are unsure of how to deal with hip hop – whilst MC’s, DJ’s and heads are deeply schooled in the roots of the genre, frequently music journalists on this island aren’t “rap critics” that understand the intricacies, nuances, ambiguity and (yes) sheer hypocrisy of the game. That’s why, superficially, Professor Green’s sophomore album, “At Your Inconvenience,” already seems to be flying over a lot of heads. Of course, all music contains seeds of universal truths, but our beloved genre plays by its own rules. So yes, whilst it might be strange to hear an emo-rap song for four minutes followed by a track where the sole ambition is rhyming about getting your dick sucked, that’s just how it goes. When analysing a rap album, you have to know precisely what to analyse, and what the MC is trying to achieve.

On AYI, Professor Green is trying to advance his career in various ways: musically, it’s an incredible diverse and personal listen that shuns the pop-dance sound of his debut; conceptually, he’s attempting to forge a much more personal connection with listeners; commercially, there are fewer throwaway chart moments – instead, he is trying to make singles that have more of an artistic merit than ripping an INXS sample. He has set the bar high for himself, as this is an album with ambitions that barely relate to his debut (it’s worth remembering that “Alive Till I’m Dead” only came out 15 months ago). Analysis of the BPM’s of each album support this hypothesis – compared to his faster-paced debut, AYI effectively only contains one track to potentially dance to (“Remedy” at 123bpm). And, as Pro says on the first track: “Why would I make dance music, when I can’t dance to it?” As with many sophomore albums, AYI is a compromise between the wishes of the label and the long-term aim of the artist. Green did what he was told on his debut, served his “time” and has earned the right to be unleashed on his second joint. In fact, if you took out “Read All About It” (which just hit the top spot on the charts), you’d struggle to find any real chart threats. It’s an LP where he can hook in listeners with a hit single, and make them realise he’s got a lot more to him. So does he manage to succeed?

Kicking off the album, is the first single and title track – where I previously criticised Pro for being too deferential to his industry peers, his acerbic piss-taking of anyone around works well: the kind of lines you’d expect from a legendary Jump Off battle MC, not the watered down label nonsense. The court jester act works well, underpinned by an excellent beat and various earworm melodies, and even if it wasn’t much of a single, it works perfectly here. A track in a similar vein – “D.P.M.O” – follows, although it’s more of your traditional rap braggadocio, over a solid and playful beat. The huge single is the first class “Read All About It” where Pro talks about both the suicide of his father and the criticism he received for allegedly “cashing in” on it. Once the Emeli Sande chorus is thrown into the mix, it’s one of the most transcendental crossover moments of the year. Luciana guests on the D’n’B moment “Trouble,” a weird hybrid track for the ladies that just about works. The guitar wallow of “Spinning Out” is a definite change of pace, and works that good old Pixies sample well – it ends up as one of the most affable tracks on AYI. All in all, the opening third is incredibly strong in many respects.

The aforementioned “Remedy” is possibly the only song that sounds like an off-cut from his debut, albeit with an added dubstep breakdown at the end. The beat is, if we’re being honest, a touch Labrinth-lite, and Mojam makes a decent stab, but it doesn’t add much to the LP (in fact, if the main beat and the dubstep break had been inverted, it might have worked much better). Nor does the producer’s other contribution, “Avalon” – even though nothing is technically wrong, the concept, beat and chorus just don’t really brew together successfully. It follows “How Many Moons” – a very strange number in many ways, but it has so much character and individuality, it does an admirable job of grabbing your attention (plus Green’s flow straight kills). “Astronaut” is – depending on your point of view – particularly reminiscent of The Streets, or Just Jack. It’s another risky number, and an interesting take on drug abuse, with Green describing details in his verses whilst the chorus takes a more ethereal turn. “Doll” is one of the typical paranoid rap joints, where the whole world (media, label, everyone) is out to get cha.

The forthcoming third single starts off the final section, with another tender moment “Never Be A Right Time” – it’s not really single material, if truth be told, but it’s decent enough and helps carry the album along (it is a particularly visual song, so perhaps a video will help). Another acoustic guitar number – “Today I Cried” – describes the journey of the aspiring rapper who was on the verge of quitting, as the Green confesses a chance conversation with Lily Allen helped change his life, amongst other things. A collaboration with Royce da 5’9″ pops up on “Nightmares” and it works well, with Pro holding his own and sounding right at home with the Detroit native (the Englishman’s verse initially sounds uneven, but listen a few times to get the flow). “At Your Inconvenience” closes with another soaring hook on “Forever Falling” and “Into the Ground” is more of a mission statement from the Prof that he’s got the ambition to “run this” – both tracks are decent, but perhaps not entirely necessary. Depending on which version you pick up, you’re likely to get a bonus track or two, and “Upper Clapton Dance” is an inventive and enjoyable posse cut.

“At Your Inconvenience” is a beguiling album. It clearly displays much growth from his debut, but not the avalanche of hit singles. The rhymes are harder, but you still get the feeling the Green is holding back at times – although he’s improved as an all-round songwriter, there aren’t that many truly jaw-dropping verses, the ones we know he is capable of, nor hip hop quotables. The first time you hear the album, you’ll probably think his flow is off too, but actually he’s experimenting and has adjusted it at various points, which has made it all the more interesting. It’s a well-crafted album, yet it’s somewhat disappointing that Green doesn’t perform more hooks himself – yes, he’s a rapper’s rapper, and (like Biggie) relies on singers to balance out the songs. But the roster of singers is relentless, ending up in double digits (literally). It does somewhat detract, and whilst there are some beautifully written songs, Green is still a real hip hop artist – sure, “Astronaut” is brilliantly written, but instead of the high-falutin’ concept on “Avalon” I’d rather the beat was cut up and Green just spat an F64 instead, it would ground the album more effectively. Put simply, it’s an album from a hip hop MC that doesn’t actually have much hip hop on it. Saying all that, it is worth picking up. Clearly Green has fought his corner, and has been allowed to experiment more – if anything, my hunch is that this has helped set him up for a third LP that could well be a classic (now he’s got the hits and emotional stuff out of the way, one senses he might just go all out and become the larger-than-life character he’s destined to be – he just needs to believe it himself now). You will undoubtedly connect to the artist after listening to this a few times, and Green is certainly becoming one of the premier wordsmiths in the UK rap landscape – it’s just that “At Your Inconvenience” might leave you wanting a little bit more of what he’s potentially best at. But make no mistake, it’s an album that displays growth, maturity and improvement in almost every respect – he’s certainly becoming a versatile and engaging artist.