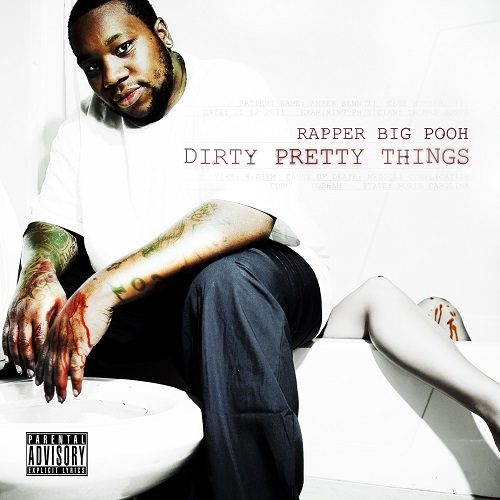 There are readers checking out “Dirty Pretty Things” right now who probably own all four versions of “Delightful Bars,” Rapper Big Pooh’s mysterious solo album, even the rare “Japanese Daifuku Version” that I’ve never personally seen. I’m on the flipside of that equation though – I own NONE of the four. I’ve enjoyed various songs from the album that came out on mixtapes, as singles, or had videos made for them, but I never went out and picked up a copy or even looked for a retail digital download. Looking back now the only thing I can do in fairness to make up for that is to review “Dirty Pretty Things” and balance the scales. They’ve been unbalanced for a while now. Phonte was always my favorite member of Little Brother, to the degree that I’ve probably overrated him to some degree as a lyricist, and may have unfairly underrated his cohort.

There’s nothing about “Dirty Pretty Things” that presents the notion the self-described “fat boy fresh” rapper is not delivering on Phonte’s level. In fact I’d go so far as to say the Family Biz produced “Medicine Man” shows just to what degree we’ve all been sleeping on Pooh like Christopher Robin. You can tell Pooh likes the rock influenced music, because he bobs his head to the beat in the music video he released back on September 11th. It brings out the inner braggart, and he does his best to profess that he’s out to get money while shining brightly rap-wise in a world of emcee darkness. “Don’t compare me to the miniscule” vows Pooh, and I certainly can’t when he drops bars like this:

“Crazy what the kid can do, can’t nobody picture you
Test me with the lyrical, the word play is biblical
Magna cum laude, you still playin middle school
Frontin like you want it, dude, decision gettin ridicule
Watch me take it to another altitude, fool!
My shit is so dope, I turn bitches into muse
Sittin by the pool, Rapper Pooh is interviewed
Drop a couple jewels, I’m the element of cool
Don’t let the blog bother me, they over-analytical
Hip-hop’ll never be the same with gettin cynical
Tell it like it is, ain’t no need to be political
Word to de Chirico, the art is metaphysical”

The diversity of dope producers he brought in to collaborate with on this hour long album is impressive. DJ Khalil mellows it out on “5.13.11,” his ode to wanting to be settled down with wifey and family, even when jealous girlfriends “gon’ want a piece too and be hood about it/breakin up happy homes/like we ain’t got problems of our own.” Khalil also lays it down quite flat for guests Kobe and Joe Scudda on the song “Make it Thru.” That puts him head to head with the esteemed Focus… for best producer on the album, who makes the wood clap and reverberate in the background of the heartfelt “Right With You.” He also laces “Real Love” to the degree even Mary J. Blige couldn’t front, giving the opener a dirty scratchy record under the needle then letting you snap your middle and your thumb together to form the beat like a pseudo-drum. Right there in the thick of the war to be #1 is Nottz on “Ballad of the Son.” Kuddie Fresh takes it to outer space and back down to earth on “They Say” featuring Choklate. Even Ahh:zel (sounds like a parody of Rahzel) makes a case on “Legendary Lullaby,” where Pooh offers some valuable lessons to the world:

“They don’t care what the problem is
They just wanna hear the +Music+, you can keep the +Biz+
Niggaz don’t understand how we hurtin kids
All this bullshit we feedin ’em through the years
Radio and fast food fuckin up they brain
I used to chase the same links in that crooked chain
Now the way they bring ’em up though is not the same
I was raised by my momma, not a picture frame”

Rapper Big Pooh sees himself as a man on a mission, where it’s more important for him to show kids that even as a college dropout you can still be an Educated Rapper like UTFO. He could probably prove it without having to specifically state it, but the honesty of his raps is an intangible quality that made Little Brother such an influential and important hip-hop group in the first place. Big Pooh spends “Dirty Pretty Things” telling you about the ups and downs not only in his life but in the lives of the people he knows, never making himself or the hip-hop music business seem overly glamorous. On the other hand he seems to be eating pretty well off it, again by his own admission, so it seems that talent and ambition are indeed well rewarded in some cases. The movie and the band that share the same name as his album may be more famous right now, but that shouldn’t remain the case long term.