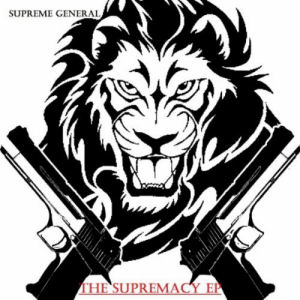 Supreme General comes straight out of Buffalo, NY with a lot of the brash, in your face attitude you expect of a rapper from New York City. His music is all about hustling and getting money so in a way he’s a mix of the NYC sound and the Down South attitude. “Supremacy” is an EP, but it has six bonus tracks that make it clock in at a total of 12 tracks. Buffalo isn’t a city known for hip-hop music, so it seems natural that the city still seems to be searching for a musical identity. Supreme General’s influences range from Nas to 2Pac, but the common theme is street music over hard beats.

The EP starts with “Puffin On That Good…” which, as the title reflects, is a song about smoking good weed and living it up. No points for originality, but the dark, bouncing beat is reminiscent of good Dipset music and the track works for what it is. “Stacks” follows and the beat is actually on a different tip with the mellow horn sample giving the track an eerie feel. Unfortunately, Supreme General focuses on hustling and the track doesn’t offer much in the lyrical department. “The Supreme General” is an anthem espousing all the positive attributes possessed by the rapper of the same name. The southern bounce and epic horns give the beat a rowdy appeal and Supreme General’s attitude is on full display here.

“I’m a G!!!” is actually a bit more laid back than the title would lead you to believe, but even Supreme General’s smooth flow and cocky confidence can’t hide what is a very generic track. “Money Talks” isn’t a new concept, as Supreme General raps from the perspective of being money, but it shows a new side of the young emcee and gives hope he can expand his topic matter/approach. Officially, the EP ends with “Supreme Dreamin,” a real soulful track complete with high pitch crooning stretched over the beat and sultry female vocals on the hook. The sound is completely different from the rest of the EP and Supreme General shows he is capable of flowing well over any type of track. He gives us a storytelling approach here and it works well.

The first bonus song is “Catch Me In The Hood,” and once again the rowdy attitude and bouncy beat screams DipSet on here. Not original, but certainly not bad either. “Steve Jobs” would seem like an exploitative song, but it actually dropped before Jobs’ unfortunate passing. Outside of that, the track is little more than a bland hustling anthem with a clever title. “Dead Presidents 3” is merely Supreme’s version of the Jay-Z classic and not the first Jay-Z reference on this EP. While it’s probably true that most emcees would sound dope over this instrumental, Supreme flows smoothly over the track. “The Roast of Fire Flame” is more of the same type of music found on the rest of the EP. Hustling anthems and hard, down south inspired beats are the norm here. Though he tries to step up his lyrical game on this track, most of his metaphors and one liners revolve around concepts that have been flipped by other emcees in a better manner. “Despicably Supreme” is a mash up between Eminem’s verse on several popular beats. Supreme General almost hangs with Em in the flow department, which is impressive, but lyrically he fails to even capture a hint of Eminem’s cleverness. The EP ends with a quick freestyle called “Lamborghini Preme” over your run of the mill trap music beat.

Overall, Supreme General is a young rapper with potential, but who is still searching for his own sound. At times its hard not to nod your head and vibe out to his music, but you are still reminded of the fact his music is largely derivative from other sounds. His confidence shines brightly and is his biggest asset, but needs to be balanced with a clearer and less repetitive vision. Lyrically, Supreme shows promise and the willingness to try new concepts, but much too often he lets himself fall back on played out hustling music and generic bragging lines. I honestly feel the kid could do something big because he has all the tools to succeed and charisma to spare, but with generic/played out topics, it’s hard to really give Supreme General a recommendation here. The beats tend to hit hard and help the overall vibe of the album, but until Supreme General diversifies his music past the street view and devotes more energy to improving his lyrics, this EP is only recommended to hardcore fans of East Coast gangsta music.