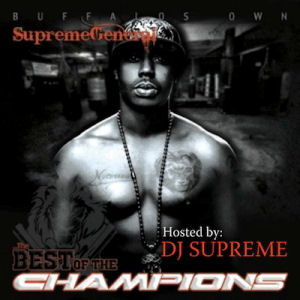 Supreme General :: The Best of the Champions

Buffalo rapper Supreme General is hip-hop’s self-proclaimed savior. That begs the question: does hip-hop need saving, and if so, from what? 2012 saw a lot of great hip-hop releases across the genre, so it’s not like the art from is in decline. Is the threat to hip-hop the proliferation of internet rappers who make raps in their computer and are untested outside their bedrooms? Do we need saving from the breed of rappers who describe themselves as “not lyrical”? Trap rappers who rap about the streets over janky beats? Pop rappers making watered-down hip-hop for the club? Or do we need saving from hip-hop’s conservative ranks, the people who think that the art form should remained ossified in its 1994 incarnation?

As much as I dislike YG, Chief Keef, the Black Eyed Peas, Flo Rida, and many of the other artists who could be accused of “killing hip-hop,” I’m more afraid of the folks who think that anything not made on an MPC isn’t hip-hop. Don’t get me wrong, I’m a fan of boom-bap and flipped samples, but art forms need to evolve. If rap tries to stay stuck in the 90s, it will become boring and irrelevant. In other words, “Illmatic” was a great album, but a 20-year-old album probably shouldn’t be your main reference when making music.

Which brings us back to Supreme General. His backstory reads like Jay-Z or the Notorious B.I.G. He was a hustler until he decided that rapping about the streets was a better plan than living the street life.  Good on him; the would be a much better place if there were 2 million young men rapping about the streets rather than rotting in prison or getting shot. Supreme General’s inspiration comes from classic New York hip-hop from the 90s: Nas, DMX, Mobb Deep, Biggie,the Wu and Jay-Z. He’s teamed up with DJ Supreme for this mixtape, in which he raps over new beats and some freestyles. He starts things off with “Steve Jobs,” where he gets his swagger on:

Supreme has an aggressive, confident flow. He can go from a menacing growl to off-the-chain shouting, coming off like a young DMX (complete with the toned abs). Most of his rhymes fall into the battle rap/braggadocio territory, with Supreme asserting his supremacy over other MCs. It’s more interesting when he is self-reflective. One of the better songs here is “Crash!!!,” in which he raps over a spacey beat about how his life is hurling by like a speeding car narrowly avoiding catastrophe.

While Supreme is a decent rapper, you can tell that he hasn’t quite mastered the craft. He occasionally crams too many syllables into his bars and his delivery at times sounds forced. He lacks the effortless flow of a truly accomplished rapper. He does bring energy, passion, and commitment to his work. His rhymes may not always hit the mark, but they are always spit with intensity.

DJ Supreme supplies beats that try to match the MC’s energy. There’s a lot of synths, snapping snares, and hi-hats, all delivered with a sense of bombastic drama. There are also some freestyles, including Mobb Deep’s “Shook Ones Pt. 2.” There are 21 tracks total, including intros and interludes, with most of the tracks not hitting the two minute mark.

While I can’t knock Supreme General’s hustle or passion, I’m not seeing him as hip-hop’s savior. “The Best of the Champions” is a fairly average mixtape, not that different from the hundreds of other mixtapes released each month. It’s not a bad listen, but it won’t reinvent the game. Whether or not Supreme General is going to save hip-hop, it has to be said that as long as there are artists like him putting their heart and soul into their music, hip-hop will be just fine.