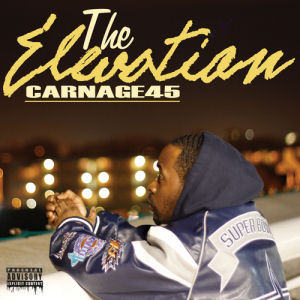 “Since they put me in a backpack sub-genre
I don’t appeal to fans of Gucci and Waka Flocka
But the lyric lovers look at me like a messiah
Treatin lines in my songs like quotes from the Dalai Lama
High caliber rhymer; country boy that got a
gift and wit and desire to push the bar even higher
Dope music supplier, “Test of Time” was my prior
I set the streets on fire, y’all buzz expired”

If we’re part of that group that put Carnage45 “in a backpack sub-genre,” I apologize to the emcee in advance. When I reviewed his last album, I though the comparisons to Cormega would indicate his lyrical appeal among many audiences, not lock him into a niche where he’s not considered commercial or mainstream. Ultimately though we as critics can only take so much of the blame though, because Carnage would have to work HARD to dumb his lyrics and delivery down to a Waka Flocka level. Even if he made a concerted effort, I don’t think he could pull it off. Either due to his inherent talent, years of polishing his skills in the lab or both, Carnage is about ten orders of magnitude beyond Waka even on his very best day.

It’s a good thing then that Carnage doesn’t sound bitter about the sub-genre that he’s in, because he’s not likely to escape it with “The Elevation” either. Good luck with that, because if you’re delivering intelligently written raps over well produced music, you’re going to lean toward the Talib Kweli side of the equation whether that was your intention or not. In fact if one were to speculate on his intentions, “Prove Em Wrong” would answer many of those questions, since he seems to be out to prove that his career is for real and those who doubt him are sadly mistaken:

“Focus on elevation, my life is steadily changin
Daily I rearrange it and right the wrongs I was makin
Really my life’s adjacent to anyone tryin to make it
But my determination’s one degree of separation
and which, sets me apart from the general population
I show the RESULTS! This is no exaggeration
I came from a little town where nothing was expected
To endorse missing sponsorships from my records
I lost track of how many times I got rejected
But every time made me strive harder for perfection”

Achieving it may not be far from his reach, if we assume that’s a humanly attainable quality, or perhaps at the very least reaching a level of straight 9’s or higher. One thing that mystifies me though is why Carnage45 is this talented, makes music as good as he does, yet continues to give away his albums as free downloads and mixtapes. As good as “Test of Time” was, this album is at least a half-step better. There are lushly produced concept songs like “Boombap vs. Soul” featuring Soulfully Me, there are eerily Cormega-esque raps over R&B and big bass on tracks like “Satan In Heels Pt. 2,” and there’s even a basketball rap devoted to Allen Iverson on “The Answer.” (Good to know +somebody+ still loves the NBA after that long lockout.) This is not 47 plus minutes of music to give away. Set a price for it Carnage – $4.99, $7.99, whatever you think the market will support. You’re too good to not be selling at at this point, and to my ear you’re only getting better.