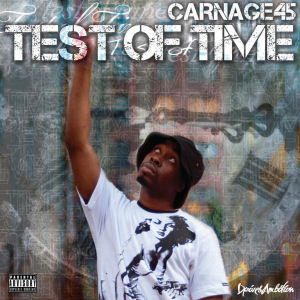 “I dreamed of being a star, when I was a nebula
Now I’m like a comet, whizzin by competitors
So why you hatin, claimin I’m this that and et cetera?
I’m nine thousand, eight hundred fifty light years ahead of ya
Eat or be like a predator, shit a classic on regular
Better than Cormega, please stop comparin us”

Thanks Carnage! “Big Dreamer” cuts to the chase and explains who you remind me of. Not that it wouldn’t have come to me in another couple of minutes anyway, because the truth is, Carnage and Cormega sound like brothers from another mother. To be honest it’s a little scary how much they’re alike – same vocal tone, same slow tempo delivery, a nasally weeded delivery, and the real kicker is their lyrical topics are mirror images of each other. Over the epic soundscape provided by The Real Cool Ethan, Car-Mega declares “The City Is Mine”:

“I’m just a little country boy, with big city dreams
And plans of takin over places that I never seen
And I refuse to let you hopes of failure intervene
Because I got a couple people that look up to me
If I can give ’em hope, then I’ma give my all
Cause you had hope in me when I had no hope at all
I had to fight the devil that was tryin to make me fall
Want proof that I’m a warrior? I’m still here y’all!”

Now Carnage real name Shawn Dix makes it perfectly clear in his bio that he hails from the Eastern shore of Virginia, nowhere near “The Realness” of Queensbridge in NYC, but put a blindfold on a friend and play them “Test of Time” and see if they can tell the difference. Instead of denying the similarity and asking people to stop comparing him to ‘Mega he should embrace the love – after all his other brother has been a cult favorite in hip-hop for the last two decades. There’s plenty to like on “Test of Time” regardless of who he sounds like or where he hails from. The slow and heavy Chemist backdrop of “Smoke & Drive” puts you perfectly in the zone as Carnage fights negativity around him with a little cannabis. “After all I’ve done, it’s amazing how niggaz hate/Who woulda thought my success could frustrate?” Ethan brings in Biggie samples over the tinkling ivories of “Don’t Phase Me,” where Car-Mega raps about the temptations of a materialistic lifestyle. The one that may get the most spins though is “Show Em How to Move,” as Blasian brings drums, keyboards and Jay-Z samples together on a track where Carnage unintentionally says “They want to hear that REALNESS, the type of shit that I spit.” You know what? I do, and I have a feeling other heads will too.

“Test of Time” is being distributed as a “mixtape” but there’s no way you could tell this is any different from a fully mastered, packaged and delivered CD other than the fact you can download it for free. There are no obnoxious DJ’s shouting over the tracks, there are no raps over the beats other emcees already made hot, it’s all original material. If you like Cormega there’s no reason you shouldn’t give “Test of Time” a try, but then again even if you’ve never listened to a single record from Mega’s catalogue give Carnage45 a chance anyway. He can’t fight the comparison, but at least it’s a pleasant and accurate one, it’s not as though anybody said he sounds like a bad ripoff of Shawty Lo. Go ahead and cop that download and keep an eye on Carnage in the future.