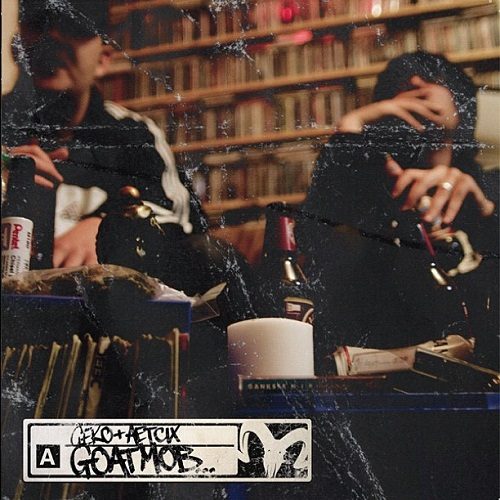 RR readers have gotten to Melbourne emcee/producer Geko over two previous releases: “The Crate Cartel” and “Crate Cartel Radio.” For his most recent album in late 2011, Geko teamed up with fellow Aussie underground rapper Aetcix, forming the crew that also became the title of their debut together – “Goatmob.” I’m just glad that when combining Geko and Aetcix, they didn’t come up with Goatse.cx.

Jokes aside there’s serious skills displayed on this latest Obese Records release, which unfortunately may be difficult to find for Yanks in the Northern hemisphere. Even though the press release claims both a CD and a digital release date of November 18th, the only place I could find it in the latter format was iTunes. Worse still, the iTunes version seems to have been shortchanged, missing the songs “Who’s That?” and “The Street” featuring Budsa. For the life of me I can’t fathom why. It’s not as though the bandwidth for 2 more songs on one album could have been a burden to Apple considering they do millions of lucrative transactions every single day. If you’re paying $10.99 for a digital album (a fairly high price given how many digital albums sell for $5 or less these days) you ought to be getting MORE, not LESS.

“Cash flow slow to a trickle, and I’m starved
I’ma walk in, armed to the teeth and take charge
Spray this blind at ’em, run past and blind ’em
and sendin ’em back to the dumbfuck who signed ’em
We be visceral, crank this to literal
levels of physical pain to deliver ridicule
Pity the fool who be hittin ’em low
I’m driven to school ’em, jetstream rush a warm flow”

Goatmob claim co-production credit for the entire album, but whoever designed the guitar licks and drums of “Who’s That?” should give themselves a pat on the back. I tend to defer to Geko being the mastermind given his prior track record, but if they want to share the beats and the rhymes that’s entirely fine by me. It’s not as though the collaboration doesn’t produce good results, much like their tracks with other Australian emcees. Fluent Form joins the fun on the menacing melody “Nothin’,” Fatty Phew helps them “Flatline” a few foes, and the irascible Maundz seems as angry as ever on “CC Camorra” despite how jazzy and friendly the piano notes are. It’s almost an all-star entourage, but to really ace things they should have brought in Muph & Plutonic too.

At only 41:48 long the twelve songs of “Goatmob” seem to go by in a heartbeat, which means the unfortunate iTunes version will be finished even sooner, leaving one with the proverbial “Empty Bowl” named in the album’s closing song. Referring again to the press release, Goatmob describes Geko and Aetcix as “imbibing in strange herbs and potions,” and if you understand the “bowl” their song title refers to that doesn’t really come as a surprise nor does the line “took more drugs than a horse.” That’s not a problem really – drug use and dope rhymes have never really been strangers to one another either in the U.S. or Australia let alone anywhere else hip-hop goes globally. They don’t dwell on it to a ridiculous degree, but their minds are definitely on “Code Green” from time to time. You don’t need to be high to appreciate Goatmob, and truthfully it would probably be detrimental if you’re not used to the Australian rap accent. Those who are will surely appreciate this album.