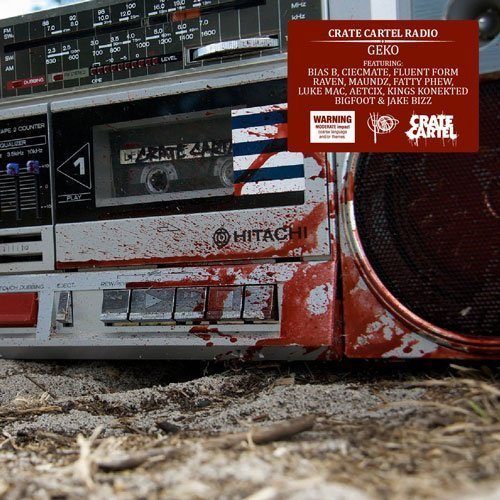 It’s a very American sentiment to assume that we’re the best at most everything, especially the things that were born and bred within our shores. We assume that we have the best baseball players, the best basketball, the best Air Force, the best automobiles, and of course, the best Hip-hop. It took awhile for us to lower our noses and look down at the international imitations flooding our markets to realize, just because it’s not “Made in the USA” doesn’t mean it’s not good. Now, the MLB is flooded with Central American and Asian talent, international players are getting drafted higher and higher in the NBA, and you see Hondas and Toyotas running the highways rather than Fords and Chevys.

Being an American, it took me awhile to warm up to Geko’s CD, Crate Cartel Radio. I was shocked to hear an Australian accent open up the album, smashing and bellowing against my speakers to keep pace with the delayed boom-bap rhythm. Being an American, I gave a patronizing chuckle when I heard an Australian accent take Snoop Dogg’s lines and changed it to “with so much drama in the MLB it’s kinda hard being M-A-U-N-D-Z!” After skipping through the songs, I made my mind up then and there that Flash had fucked up and sent me his Australia souvenirs instead of an actual album for me to review.

Of course, after taking a step back, I realized that being American can sometimes entail being a close-minded douchebag. So I decided to give the album a better listen. After two or three more spins in my trusty Honda Accord, the accents stopped bothering me, the rhymes starting making sense, and the beats sounded less chaotic and more measured. With that, I wiped the egg off my face and finally saw this release for what it is, a refreshing take on hip-hop that would find its place in between “Army of the Pharoahs” and “Apathy” at your local record shop.

The album draws a lot of influence from the Army of the Pharoahs and Demigodz, with dark, heavy, boom-bap laden beats that drum your speakers to the point of blunt force trauma. The lyrics are woven in well constructed schemes, with a respectable flow, and a delivery from the most acidic pits of the stomach. Main man Geko is featured on most of the tracks, but this album is more of a compilation highlighting the entire Crate Cartel camp rather than a solo effort from Geko himself. It should be titled Geko Presents: Crate Cartel Radio, but I digress.

One of the album’s highlights is “Frontline” with Geko and Fluent Form. The production is stripped down, with a single layer of sound and a drumline that nips and bites at the listener. Geko and Fluent Form never stop assaulting the microphone and come to work. The lyrics won’t come and grab you per se, but their schemes are so clean and complex that it makes even simple lines like “illa killa capillaries” sound ill. Other songs like “Sniper Silhouette,” “Waiting,” “Not Going Out,” and “Kill the Beast” are other high points throughout this album.

If there is one thing I noticed, it’s the emphasis of multisyllable schemes throughout the album. It defines the style, I’ve heard Australian battle rappers master the art of spitting multis, but it’s also one of its biggest drawbacks. Sometimes I feel like lines and verses are forced to keep the flow clean, and the scheme limits the MCs from saying true quotables through the album. I mean, the lyrics are not bad by any means. But there’s nothing truly fantastic that jumped out at me. And while the production is mostly solid, the drumline in “Still Hungry” tries to do a little too much and really takes away from what is otherwise a solid song.

Just because New York is the birthplace of Hip-hop doesn’t mean that it can’t grow and mature somewhere else. Just like LA, the Bay Area, Chitown, the South, and Detroit have all branched off from the trademark East Coast sound, international scenes like Korea, Japan, France, Australia, England, and Germany have been putting their own spin on the wheel. Geko, and the rest of the Crate Cartel camp, have my deepest apologies for my close-minded attitude from before. This album is dope, and it’s definitely worth a listen if you can keep your perceptions open.

Hell, if you drive an Honda, have a Phillips TV, use a Samsung phone, and root for Andris Biedrins, you can give Australia a chance, right?