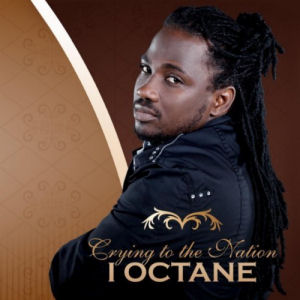 I-Octane :: Crying to the Nation

Jamaican singjay I-Octane has been generating buzz for a few years now with singles like “Lose A Friend” and “Nuh Love Inna Dem.” He released a mixtape last year, and an EP earlier this year. His debut album, “Crying to the Nation,” contains his early singles as well as new tracks.

Those expecting hard-hitting dancehall might be put off by I-Octane’s kindler, gentler take on the genre. The opening track, “Rules of Life,” is a mellow Caribbean song that is more suited to a tourist resort than a sweaty soundsystem. Surely there’s more to I-Octane than lightweight reggae sung with a gruff voice? Thankfully, there is, although he has definitely gone mellow on this album.

He immediately ups the ante with “Help I Please.” The riddim is dirty, R&B-inflected reggae, and I-Octane’s voice has just the right mix of earnestness and roughness. The man can hold a tune despite having vocal chords that sound shredded from years of yelling into a mic. In both his lyrics and his persona he comes across as a someone who has seen the drama of life on the streets first hand, and has decided to live a more righteous existence. He’s not trying to be the toughest or most virile. Instead he aims at being wise and honest.

He also shows his diversity on this album. He nails heavy roots on “Vanity Will Come” and club-friendly dancehall on “Nuh Love Inna Dem.” Even the obligatory ganja track, “Puff It,” is made interesting by a sparse R&B beat. For better or worse, the bulk of the album is mellower reggae. The best of these, like “Lose A Friend,” are beautiful and heart-wrenching. There are moments where the album feels lightweight, and I found myself wanting more dancehall and less alto sax.

In the end, “Crying to the Nation” is a solid album of concious reggae. I-Octane brings a nice mixture of rawness and polish, and his thoughtful lyrics show that he has better things to worry about than sex and violence. It didn’t pack quite the punch I was hoping for, but it is still recommened for fans of reggae.