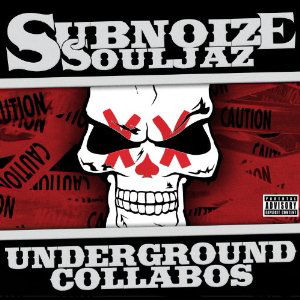 It’s debatable whether or not the SubNoize Souljaz are a group, since the entire roster ofSuburban Noize Recordsqualifies for membership. “All true soldiers return to the pit” is their explanation for how and why the combinations on compilations like the two-disc “Underground Collabos” occur. Other sources have referred to the SubNoize Souljaz releases as mixtapes, and there’s at least a hint of truth to that description. There are times when a mixtape can be a collection of greatest hits, obscure non-album tracks, or collaborations with other artists. In the traditional sense of either songs blended together, or a deejay shouting his name loudly over and over, this wouldn’t be a “mixtape” at all.

Tech N9ne fans will no doubt be happy with this compilation, especially given it doesn’t repeat any songs from his own “Collabos” album. While it’s true Tech N9ne is not part of the Suburban Noize roster, there’s a like-minded independent hustle connection between them and the Strange Music label that frequently leads to both camps touring and recording together. As a result Nina is on three of the first five songs, the best of which is “Bollywood Chick” featuring Kottonmouth Kings & Swollen Members. In total between both discs of this set he can be found on 13 songs – nearly half of this compilation. One might wonder why Suburban Noize and Strange Music haven’t taken the logical next step of forming a true supergroup with members of both rosters. They probably will. Here’s an excerpt of Madchild’s rap on “Bollywood Chick”:

“I met this fly young hip chick, bright pink lipstick
She said ‘I like a bad man,’ I said ‘Come get this!’
Known to ball, baby I got it all
More writing on my body than a bathroom stall
Gettin cash by the fistful, pinky and my wrist glow
Plus I took her shopping and took her to the disco
Windy windy, grind ‘pon de stallion
Double E cup, yup! Fuck with a champion
Yes; I am that dude
I said ‘When God made you he was in a good mood’
She said ‘I can’t be controlled – only unleashed’
I said ‘You came to the right place, baby I’m a beast!'”

I’m used to Madchild rapping about trying desperately to stay sober or being completely psycho, so it’s a surprising and not unpleasant change of pace for him to be a baller for a minute. Unfortunately this is a downside of this massive double album – there are only two songs featuring the Swollen Members crew and they ARE part of the Suburban Noize family. I would have also enjoyed more X-Clan appearances. The haunting and hard hitting song “Respect” combining Brother J with Tech N9ne is just fine, but you won’t find any other “red black and green” team-ups. If you own X-Clan’s “Return From Mecca” you already have this song anyway.

That leads to the two criticisms I’d like to offer of this weighty double album. First and foremost if you’re a long-time Suburban Noize soldier in your own right, you probably own most of these songs – right? Pick a song at random and odds are it was on a previous SubNoize CD. “A Million Miles” by Big B is from “More to Hate.” Kottonmouth Kings’ “Sex Toy” is from “The Green Album.” “Fuck the Police” is from “Long Live the Kings,” which at least is better than reusing the similarly titled song from “Blast From Tha Past.” Secondly if you thought Tecca Nina dominated this compilation, the Kottonmouth Kings REALLY own this shit. As a group or soloists they are on well more than half of both albums. Therefore even if you aren’t a die-hard Suburban Noize supporter but a huge fan of the Kings anyway, you’ll notice repeats even more quickly.

If you want to know more about the music and the production, you’ll have to refer to the liner notes of the original albums these songs come from, because there are none here. Suffice it to say though that the songs are of the general quality one would expect from SubNoize, which means clean mixing and generally above average beats, with an occasional foray into “rap rock” that either works or doesn’t. If you were to give this double album to someone who had never heard a single Suburban Noize record, they’d probably be intrigued enough by most of the songs to want to hear some more. The problem is it’s hard to imagine someone who is NOT a die-hard fan putting down money for a double album, so if this was their strategy it clearly backfires. A single disc of “Collabos” offered at a bargain price would make their statement to newcomers better, and would also cut down on filler material – but I hate saying the latter because it seems to apply to the majority of double albums. Unfortunately the shoe fits these Souljaz, so they’ll have to wear it.