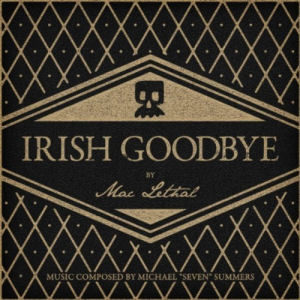 2011 was quite the year for Kansas City emcee Mac Lethal. He started by getting a couple million hits on YouTube videos like “Pale Kid Raps Faster!” “Pale kid raps EVEN FASTER!” and “Charlie Sheen Bi-Winning FAST RAP.” These videos gave the rapper, formerly signed to Rhymesayers Entertainment, a lot of exposure, but it wasn’t until he did one of his famous fast raps over Chris Brown’s “Look at Me Now” while making pancakes that his fame really took off. The video in which Mac spits his effortless double time flow while making perfect golden brown flapjacks has now exceeded over 22 million views, and has helped him gain countless new fans. But also with these gimmicky videos, loyal fans who love Mac Lethal for his previous work such as “11:11,” “Men Are From Mars, Porn Stars are from Earth” and his “Love Potion” mixtape series have questioned whether or not the veteran indie rapper has sold out.

And with his third full length LP (first since 2007), “Irish Goodbye,” Mac Lethal answers those skeptics with a firm â€˜Hell noâ€™ with the album’s opening track, “The Parlour”:

“Even though these record labels told me that I need to act realer
They said they’ll sign me if I act like I’m Mac Miller
Some even said they wouldn’t sign me cause I’m balding
Even though my flow is straight scalding
[…]
I don’t even need a cheesy pop single or a chorus
Y’all bout to watch me shift the whole entire global orbit
I’m on my own dick it’s so big, it’s so enormous
I think I’ll swallow myself like I’m the Ouroboros
Morbid, black poisonus orchids
Torture anybody on that music business whore shit
‘How much does a feature cost?’
Bitch you can’t afford it”

“Irish Goodbye,” released on Mac Lethal’s own label, Black Clover, notably has no guest appearances as well as none of his fast rapping that made him an Internet sensation. Instead his first album in over four year features a perfect balance of humor and seriousness, over production handled solely by Michael “Seven” Summers (Tech N9ne, XV). Seven combines dark synths with chopped up eerie vocal samples like on the aforementioned opening track and “Black Rainbow” which are the perfect backdrops to Mac Lethal’s top notch story telling.

Mac touches on troubled relationships on a couple of standout tracks including songs like “Black Rainbow” and “Slut (Recorded in a Motel in Fargo During a Blizzard).” On “Rainbow” Mac has an affair with a married woman until he has a change of heart:

“Slut” is also one of the album’s best tracks as he tells the story of a girl who “has a slutty side that she shows to everyone.” What makes “Irish Goodbye” work, is that Mac Lethal effortlessly balances the more cynical tracks with uplifting, optimistic songs like “Jake + Olive.” The track is a true story about his grandparents who met in Ireland and got married in the United States. “Jake + Olive” also features Seven’s best moment, as he laces Mac with a bouncy, Irish-influenced beat, that has a brilliantly subtle beat switch up when Mac raps about the death of his grandparents.

Throughout 2011 Mac posted Twitter and Facebook updates on being approached by labels, and as he mentions on many songs on “Irish Goodbye,” he turned them all down. But it’s pretty clear why he garnered some interest from the majors with songs like “Aviator,” “Happy to Be Living,” “Wooooo!!!” and “Morimoto (Just Duet).” These tracks are effortlessly inspirational and have well thought out but undeniably catchy hooks that would put Eminem to shame.

For the most part “Irish Goodbye” is an extremely captivating album that will make you laugh, make you cry, and make you get up off your ass and do something with your life. But Mac also has a few slip ups, the most notable being “Quarter Life.” Black Clover devotees will recognize the sample (or maybe even the entire beat) and the melody on the hook from another Mac Lethal song, “Prove it to Me.”

“Irish Goodbye” definitely stands up with Mac Lethal’s finest work, and puts any skeptics of his loyalty to making good music to rest. And 2012 looks to be an even bigger year for the Kansas City rapper as he has hinted on Facebook that he will be signing with Tech N9ne’s Strange Records: “So. Tell me who you think my Recording contrAct is with? Ne one Got a guEss?”