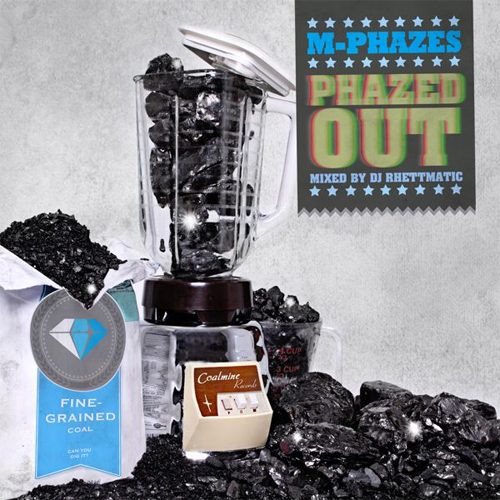 Hot hip-hop import producer M-Phazes has long been associated with the DJ Rhettmatic, renowned turntablist from the World Famous Beat Junkies. With M-Phazes revisiting old tracks to give them his new spin while Rhettmatic makes like Blendtec on the mix putting it all together, the result is a compilation all involved call “Phazed Out.”

After a two minute “M-troduction” featuring M-Phazes affiliate Emilio Rojas, things take a turn for the worse on a revisit of “The Raw” featuring Saigon, Bekay and Inspectah Deck. It probably doesn’t help matters that I’m a fan of the grimy piano laced production of the original Street Orchestra track way back in 2007, but the Shade 45 deejay rewind and repeat of the Saigon phrase “On the average night, I’m likely to stab a fag with a knife” strikes me as an incredibly poor choice. As one line in an otherwise dope song it slides by, but put focus on it and an emcee I otherwise have high regard for come off like a hateful bigot. As good as M-Phazes is, I don’t think he could have improved on the original anyway. What’s stranger still is the remix OF a remix. Famoso’s rather forgettable “Underground Railroad” got new life when Shabaam Sahdeeq, Sadat X, Termanology and Chubb Rock jumped on it. I’m not sure rearranging the order and changing the beat does anything for this song that wasn’t done the first time.

Now don’t get me wrong, there’s obviously good intentions aplenty on “Phazed Out.” Just throwing out a compilation of previously hot singles and acting like it’s hot shit all over again in 2012 might not play well. Perhaps just having Rhettmatic do the blend and mix, plus throwing in some brand new exclusive tracks for the compilation, would have been reason enough to check it out. The problem I keep running into is that the original versions of these songs are personal favorites of mine, like Bekay & Masta Ace’s “Brooklyn Bridge,” so even though M-Phazes comes correct on the jazzy and soulful remix it doesn’t exceed the dopeness I associate with the ivory laced original. There’s only one song on “Phazed Out” where I’ll declare a fair and solid TIE between two takes. I wouldn’t say M-Phazes did more than DJ Dyllemma’s beat did on “What It’s All About, but the slapping funk and smashing drums make it an enjoyable alternate take.

The less familiar you are with these tracks to begin with, the better the “Phazed Out” compilation is. Sean Price has such an unforgettable voice that the line “ladies love Cool James but they hate Sean P” from Heltah Skeltah’s “Midnight Madness” is blazed on my brain to the original instrumental. The M-Phazes version changes the whole tone of the song, taking what was just a hard and heavy cut into something that sounds like the soundtrack to a “Scream” flick. It has its value, and had it been the other way around, I would be loyal to the M-Phazes version and wondering why the new remix softened it up. That’s not the way it happened though. Perhaps this is me as an old head talking but back in the day remixes not only had to reinvent the beat but bring in new emcees and/or complete flip the lyrics – like how one version of ATCQ “Scenario” was 100% different from the other. “Phazed Out” is definitely different, but it’s like the phases of a moon – you look up in the sky and see that it’s different but still know what the original was like. I’d much rather howl at the full moon I remember.