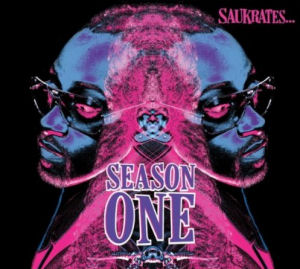 Though he may lack the international recognition of other Canadian emcees such as Drake, K’naan and Kardinal Offishall, Toronto artist Saukrates has proven to be one of the key hip-hop figures in the Great White North. Having been in the music industry for 18 years, Bigg Soxx has collaborated with Drake, Nelly Furtado, Method Man and Redman among others. He was also signed to Warner Bros. Records in 1996 and Def Jam in 2000, though he was dropped from both labels. After almost 13 years since his independent debut studio album “The Underground Tapes

,” Saukrates has finally come back with the April 2012 release of “Season One.”

The introspective material of “Season One” is the main reason Bigg Soxx stands out as an emcee and vocalist. “Before We Go” featuring Michelle Nyce contains a nice blend of orchestral and electronic sounds as the Toronto emcee reflects about his rocky relationship with a girl while he vows toward the end to make amends. As well, Saukrates’ ability to seamlessly switch from rapping to singing at appropriate times during the tune is interesting. Similarly “Doorite” featuring Nickelus F and k-os is another solid track where the rapper reveals his past struggles where he misbehaved, yet his life experiences have made him more mature in the end. The standout tune on the record is the highly emotive “Sometimes” which contains effective buzzy keys and persistent drum line. On this tune Saukrates delves into the underlying issues of alcoholism and drug abuse in an original way:

“I had one too many cocktails, Molotov
Ok, here we go again Saukrates trippin’ off
Thinking how I’mma start the album
Maybe solve a problem, get that shit out the way
Before I knock ’em out and try to purge every issue that gets in the way
I know I’m slurring but I swear I’ll quit that shit today
I dive to the bottom of the glass looking for a hero
All I found is the last drop of Veuve Clicquot
Somebody tell him that he drinking like a bass
Thinking in the third person praying that he never crash
Easy falling in it, but hard trying to quit it
Chasing that glim fitted on a hundred yard dash
Think fast, I’m dealing with the issues
Before my family drying they eyes with the tissues
I’mma take the time to say what’s on my mind
Cause I don’t want anybody momma crying DUI”

In many cases, alcohol and drug abuse are issues that end up being glamorized in music, yet the Toronto emcee takes an empathetic outlook on this track and comes across genuine in his approach. “All in an Instant” is a respectable ode to hip-hop with a persistent electro-funky bounce and bottom heavy drums. Though comparing hip-hop to a female has been done in the past, Saukrates reminds the listener that he loved the genre because of its ability to be innovative and express free thought.

“Tomorrow” is a nice track where the Toronto rapper contemplates his future in an optimistic way as Bigg Soxx proclaims that he is the voice for a new generation even though he’s a respected veteran in the game. The melody evolution throughout the tune from the electronic synths and incessant drums to the atmospheric sound and slowed down percussion is a solid change of pace and reflects the high level of musicality on the album. The inspirational “Say I” featuring OB OBrien illustrates Bigg Soxx proclaiming that one should not be afraid to dream since hard work will eventually pay off. The classic boom-bap sound and piano tinkle make this track a sure fire radio hit along with “On the Run” featuring k-os and Nelly Furtado which cleverly uses a sample of Phantom Planet’s “California.”

Besides the bonus cut “iPhone4” featuring Meesah it is hard to criticize Saukrates for his lyrical content. This tune, however, seems highly out of place as Saukrates describes playing his girlfriend and detailing his numerous side chicks. The overly buzzing synth of this track make matters worse and is really the only song to skip on the album. Tunes like “Lost” and “What a Day” express positive messages about choosing your own destiny and finding love yet suffer from oversinging on the part of Bigg Soxx. Though Saukrates is a decent vocalist, on “Lost” he sings exclusively and his lack of range starts to wear thin on the track. “What a Day” does feature rapping but shows the emcee trying to push a bit too hard melodically.

The self reflection and maturity of “Season One” clearly make it an overall effective album. Through his ability to effortlessly switch from rapping to singing a melody, Bigg Soxx lives up to his name as the Greek philosopher Socrates was said to have mentioned “The unexamined life is not worth living.” In various songs Saukrates explores the tragedies and triumphs of life while remaining optimistic that better days are ahead. Throughout the album the Toronto emcee displays his unique flavor and importance to Canadian hip-hop. The 13 year delay between albums was definitely worth the wait.