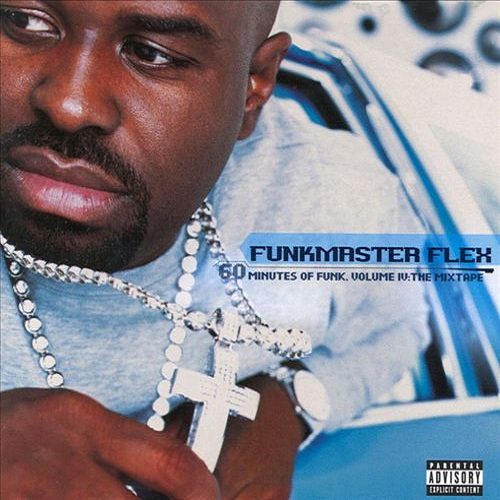 It’s that time again, and Funk Flizzy wants to get busy. If you thought that “Volume 3” was really ‘The Final Chapter’ then Flex is laughing at you and you’re probably saying “Ha ha very funny motherfucker” right back. Let’s not sweat that though – what’s really important here is whether the tracks on the album are some dope exclusives and hot new shit.

This compilation certainly starts out that way, with a nice intro by Dr. Dre and then the ultra-chunky beats of “Do You” by DMX. I’m not honestly sure who produced the song because the liner notes in the CD are incredible hard to read (it’s like a size four italicized white font on a dark blue background) but he deserves some dap because it’s hot as hell. DMX does it justice by doing another one of the raps that showcases his often underused potential to make songs with a message or a point; in this case, being true to your own actions and making a life for yourself. Unfortunately, it’s immediately followed by “I Don’t Care” by Jadakiss. I know he has fans out there so it’s gonna cause some angry responses to say this but I think most of the time he is only half the rapper people think he is. His droning flow has only gotten more annoying over the years, not less, and he brags about being hot when he’s so monotonous he makes Young MC look like lava on fire by comparison.

Nelly drops a new song on the album called “Come Over” that sounds like a sequel to “E.I.” at a slightly faster tempo; it moves nicely and will probably be well received by his fans. It’s mostly overshadowed though by the Mister Cee and Notorious B.I.G. song “The Wickedest” that sounds like it was culled directly from Cee’s infamous “Best of B.I.G.” mixtape. This one is leagues better than much of the “unreleased” Biggie material that’s come out lately and actually sounds better for it’s raw unpolished structure. After that comes the unnecessary but completely enjoyable remix of “Ante Up” by M.O.P., on which Busta Rhymes makes a typically hot cameo and First Family affiliate Teflon also drops a nice verse. Big Pun’s girl Remi Martin is here too, but no offense she sounds out of place running with the males on this one.

The one track a lot of people are probably going to jock on this new edition of the “Mixtape” is the Eminem and D-12 duet “Words are Weapons.” I gotta give it up though, this song has an incredible bassline and guitar groove that is a bit reminiscent of “Bad Meets Evil” from the Slim Shady LP. Eminem’s verses are the hottest though, as the D-12 crew doesn’t really have the over the top anxiety or hardcore punchlines of their mentor.

Unfortunately, fliggity Flex felt obligated to include some R&B selections on this issue, as he usually does, and these miss me completely. I’m sure somebody out there will appreciate “How Would You Like It” by Ginuwine or “You Will Never Find” by In Essence or “Goodlife” with Faith Evans. The only one I can really get into at all is the So So Def Remix of “Did She Say” with a typical Jermaine Dupri orchestrated cameo by Da Brat and a cameo verse by Lil’ Bow Wow. This album only picks up the pace when we get back to the real hip-hop, like the new Lil’ Kim track “Rockin’ It” and the Capone-N-Noreaga banger “What Son What.”

The track that really caught me by surprise was the Ja Rule and Murderers song “Feelin the Hate” – I normally find his crew of rap dawgs unimpressive but the rock guitar backdrop of this track makes them come off with some hotness and Ja smokes the beat when he finally gets the mic grip. Hip-Hop “Politically Incorrect” spokesman Shyne gets his on with the eerie sounding “Bad” and then Flex completely changes up the pace with the typically Ludacris track “Block Lockdown.”

The nice thing about this album from Flex is that it is not overloaded with short “freestyles” as past albums have been. A short joint by Nature and a finale by Fabolous are about the two biggest highlights in this department. Given the relative dopeness of the new tracks, Flex being not more obnoxious than usual (the less he talks the better) and the overall wide representation of hip-hop styles on this compilation, this may actually be the best Funkmaster Flex CD yet.