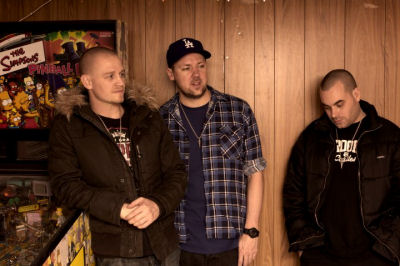 Australia is well known for its gorgeous scenery, their national symbol of the kangaroo, and beer that comes in oversized cans. Something else they should be known for is their hip-hop scene, which has been steadily growing over the past twenty-plus years. Hilltop Hoods, which is the trio of MC Pressure, Suffa and DJ Debris (pictured L to R), have been a part of that growing scene since they formed as a group back in 1991 (at the time their DJ was DJ Next, but he left the group in the late 90s to pursue another career, and DJ Debris, who had been producing, became the group’s full time DJ). With the release of “Drinking From the Sun

” they’re now seven albums deep, and they have three DVDs to go with those albums. It’s the kind of catalog most artists dream of having.

This week, RapReviews caught up with MC Pressure to find out more about the group, and the way in which they’re in a perfect position musically. MC Pressure also discussed the meaning of Drinking from the Sun, and talked about the grant Hilltop Hoods created to help aspiring hip-hop artists in Australia.

Adam Bernard: America is fairly xenophobic when it comes to hip-hop, and because of this we don’t know a lot about other countries’ hip-hop scenes. You’ve been a part of Australia’s scene for over 20 years. Having seen your own scene grow for so long, what would you say are the main differences between the landscape of Australian hip-hop and American hip-hop?

MC Pressure: Apart from the obvious accent, the scene in Australia is a lot younger. I think our scene is comparable to hip-hop in the States ten years ago. A lot of Australian crews have a very boom bap style of sound.

AB: Is there as big a division between mainstream and underground hip-hop in Australia, and if there is which side of the line do you feel you stand on?

P: It’s not as big as the division between underground and mainstream is in the States, but there is definitely one growing now that hip-hop has blown up in Australia. We stand somewhere in the middle. We have always had an underground sound, but have been lucky enough to have some commercial success while not having to change what we do.

AB: Artists from outside of America oftentimes have a very hard time achieving success in the States. Was there ever a time when this was a concern for you, and was there ever a point when you just said, “F-it, let’s focus on everywhere else?”

P: We’ve always taken the angle that we want to make the same type of music that we would want to listen to ourselves. We never tried to please a certain crowd or make beats that we thought other people wanted to hear, we’ve always made the music we want to hear and let the listeners come to us. Its gotta connect at home for it to be able to travel.

AB: This year you released Drinking from the Sun. First off, what does it mean to drink from the sun?

P: The album title speaks of the scene in Australia, and hip-hop worldwide to an extent. It started as an underground movement that’s risen into the limelight and is now one of the most popular genres of music period. We came from below and now we are basking in the light from above.

AB: In terms of the music, what’s different this time around?

P: More producers got in the mix this time around. We used more session musicians, as well; everything from guitar and keys to string quartets and a choir. We made a shorter album, as well. This is something we did deliberately. We didn’t want any filler or any tracks we’d look back on a year later and say “that shouldn’t have made the cut.”

AB: Lyrically, what are you addressing on Drinking from the Sun?

P: The lyrical content varies from track to track. There are a few party and battle style anthems, but there are some deeper joints, as well. The album starts on “The Thirst (Part 1),” where I tell a short story about what we’ve been doing and where we have been for the three years since our last record. Suffa finishes the album with the other half of the track with his take on things and where we are headed. There are a few songs that are more socially conscious like “Lights Out” and “Shredding the Balloon,” and we did a song with Chali 2na speaking out against bigotry in all its shapes and forms (titled) “Speaking in Tongues.”

AB: Even though you’ve been around for 20+ years, let’s say this is the first time someone has listened to you. If they pick up Drinking from the Sun, what kind of an introduction are they getting to your music?

P: A moody introduction through the intro, then a slap across the face in track one, just in case they were getting too comfortable. It’s hard to say how people perceive our music. I lose perspective on our albums at some point during the creative process after hearing it a thousand times. I guess you gotta let it speak for itself.

AB: Speaking of your creative process, in what ways has creating an album become easier for you over the years?

P: I think experience has taught us there are no rules to making music, it’s just something that has to come naturally. If it’s not natural then you’re forcing it and the track probably ain’t working.

AB: I know you have a ton of fans. Tell me about your most memorable fan encounter.

P: Oh man I’ve met some colorful characters over the years. We have a gallery of people on our Facebook page that have tattooed our lyrics or artwork on themselves, but the most memorable would have a to be a girl that insisted on doing us a Puppetry of the Pussy show. Ya’ll heard of Puppetry of the Penis right?

AB: Truth be told, you just make me Google it, and, umm, moving far far away from penis puppetry, tell me about the Hilltop Hoods Initiative and some of the artists who’ve received grants because of it.

P: We started a grant some years ago to help up and coming hip-hop artists in Australia. Every year in conjunction with APRA (Australasian Performing Right Association) we give away $10k to help kick start an applicant’s career. It’s our way of giving something back to the scene. A winner from a few years ago just dropped an LP thats dope as fuck, so it’s great to see some of these heads putting the money to good use. Check out K21’s Single Minded Civilian if you get the chance.

AB: When you started the Hilltop Hoods Initiative did it surprise you that the government was supportive of it? Most politicians here want to blame rap music for things, not embrace it.

P: We actually received a similar style grant just before we dropped our first LP, which was where we got the idea to do our own years later, so we weren’t so surprised that local government backed it and helped us.

AB: Finally, since you’re in Australia, can you slip Havana Brown my phone number the next time you see her?

P: Only if she takes mine first!