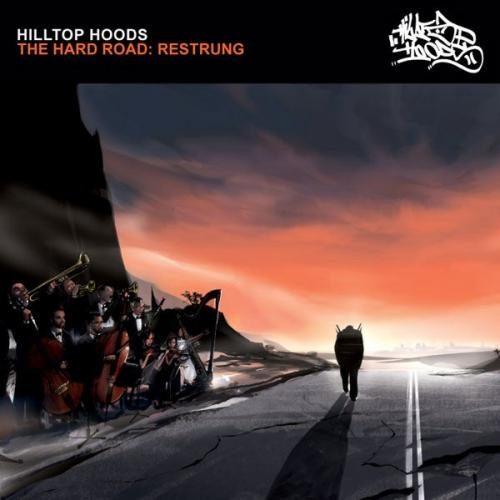 “The Hard Road: Restrung” is an ambitious effort. Everything about the album shouts grandiosity, from the gorgeous, illustrated cover art to the orchestral tune-ups of the Hilltop Hoods’ original smash-hit Australian LP. That’s right – what was once a normal, boomety bappety, hippity hoppety, MPC-produced album was given the ultimate “remix,” in the form of the 31-piece Adelaide Symphony Orchestra. Now THAT’S doing it big.

The whole “restrung” concept is one not well-known in the hip-hop world. Jay-Z has experimented with both live, unplugged versions of his songs AND a mash-up project with nu-metal giants Linkin Park, while M.O.P. has recorded an entire album over heavy metal guitar, but rarely do hip-hoppers give the wind and strings department a call. Why? One would think it’s simply too expensive, but also because Beethoven’s 5th isn’t so street.

The project’s closest comparison would probably be with that of Kanye West, as he invited Jon Brion’s orchestra to help in making “Late Registration” the modern classic that it is. Only the Hoods don’t do it so subtle. The string versions are truly gorgeous, but the sound is decidedly more epic. The whole album is like a cross between John Williams and Stoupe the Enemy of Mankind – an idea Star Wars heads would be sure to cream themselves over. Indeed, the beats would suit any number of major motion pictures, and with a mix of soul samples, it bears even further comparison to the college dropout’s aforementioned LP.

While the music is great, the lyrics are equally refreshing as emcees Pressure and Suffa truly do avoid the easy path – often rapping about personal struggles and hardships. The title track speaks in particular, where both Suffa (“and bail me out, a failure out once again/next weekend, bail me out, drunk again”) and Pressure (“but that’s the breaks, right? Starting working late nights, never seeing daylight, getting paid like a slave might”) are outstanding. Braggadocio is given a backseat (for the most part), and even when it does shine through, it’s still clever enough to avoid sounding clichÃ©d.

“Conversations from a Speakeasy” is a waltzing, jazzy head-nodder, and Mystro and Braintax lend two excellent guest spots to “Obese Lowlifes.” Often, the strings only help emphasize the dopeness of the beats, as “City of Light” bumps over an acoustic guitar that could have served itself. “Clown Prince” follows nicely, with a light vibe perfectly accentuated by the Orchestra’s delicate plucking. My only grudge is that a similar descending melody is shared throughout the listen, and as a result, some of the album sounds as if it’s on repeat.

Perhaps to commemorate the platinum selling (70,000 units) Australian LP “The Hard Road: Restrung” would look to be the alternative to the norm, instead of doing the whole double-disc, remix thing. Included in the liner notes are a lyrics booklet and more pretty illustrations. The road might have been hard but the listen sure isn’t.