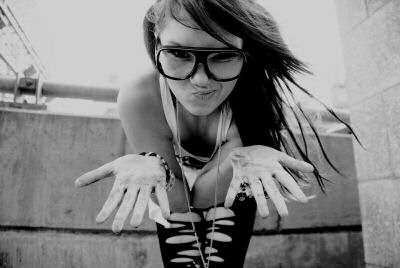 Possessing the lyrical prowess of Charli Baltimore, and the visual creativity of Kreayshawn, Nova Rockafeller is something special.

Born in Canada, raised in Negril, Jamaica, and having bounced around America, including stops in New York and LA, Nova Rockafeller, who is of Ukrainian, English and French descent, realizes she’ll initially be lumped in the “white girl rapper” category, but according to her that’s OK, “as long as they say ‘rapper.'”

Nova Rockafeller, first and foremost, is about her skills, which is something some may not initially realize when they take a look at her unique fashion sense that includes custom made jewelry from her Toys On Chains line, and duct tape modified thrift store t-shirts that she plans to market as a modified street wear line “so girls of all body types can modify them.” She is imaginative, she is colorful, and she wants to rap circles around her competition.

Right now Nova Rockafeller’s video for her single “Call Me (BATMAN)” is blowing up on YouTube, and the major labels are starting to come calling. RapReviews caught up with her while she was taking a break from filming her next video, and she told us about her past, the meaning behind some of her lyrics, and why she decided to create a t-shirt that says “I Fucked Her” over a picture of herself. Nova Rockafeller also discussed the very strange tradition she has after meetings with record labels, and the kind of date she desperately wants to be asked out on (hint: it involves a corsage).

Adam Bernard: You moved out of the house at a pretty young age, correct?

Nova Rockafeller: Yeah, I moved out at like 16 or 17. I was back in Canada at the time and I was living in group homes and shit. I ended up moving back in with the family for a month and then I was like this is stupid, and just left.

AB: How was that experience of going out on your own at such a young age?

NR: Oh, I wasn’t on my own, I had mad friends. We just like partied all the time and then I slept somewhere different. It was whatever. I grew up on a resort in Jamaica, and then I went to boarding school in Jamaica. I didn’t have my parents around me that much in my childhood. From the time I was 8 to 14 we were on a resort, so my parents were at work and I was running around being a retard with all the kids.

AB: Do you consider yourself a free spirit?

AB: Other people seem to like what you’re doing a lot because you are starting to get the attention of the major labels. I know you have a weird tradition you partake in after you meet with these industry folks. What’s up with stealing a piece of kitchenware from each label you visit?

NR: {*laughs*} I like sentimental things. That sounds so stupid. “Oh, this is the fork I got from Sony Records.” “This is the weapon I got from Warner.” I was meeting with Universal at (an executive’s) house and I couldn’t steal anything because everything was so expensive. When I left my manager was like “did you steal,” and I was like no, I didn’t steal, everything was made of crystal. But I like to remember stuff, and I bring them presents, too. I bring people tacos, and bags of cookies. For this one I brought cereal and chocolate milk.

AB: So you jack a few utensils in exchange for bringing chocolate milk, and everyone can see your unique fashion sense, but to get this far there also has to be a serious side of Nova Rockafeller. What brings out that side of you?

NR: There’s really no serious side, I’m just focused on getting shit done. I realize that you can do anything that you want to. I know that sounds really corny, but you can do anything you want to if you just do it. You just start and you learn along the way. I did a clothing line, I did a jewelry line, I produced all my videos, I write most of my videos, you just get it done. If that’s the only thing you do for fun – the only thing I do for fun is cut t-shirts, glue Power Rangers to rings, and write rap songs – eventually you’re gonna be good at it. The longest I’ve had a regular job is for two weeks. From grade ten I never went to school. I’ve never done anything except for this stuff.

NR: Yeah, I grabbed my GED. I actually passed in like the top one percentile. I didn’t read the book, and from grade ten I didn’t go to school, I just wrote rap music.

AB: Earlier you mentioned living in group homes, and in your new single, “Call Me (BATMAN),” you mention having a “fucked up past,” saying “gloves hide the scars, and the blunts numb the pain.” What scars are you hiding and pain are you trying to numb?

NR: I was a screwed up little self harming child until about six months ago. It’s been a really ridiculous path. Growing up in group homes you’re around people that you know are never going to do anything with their lives. I see kids that felt like my brothers and sisters at points in time and now they’re like street kids. They have nowhere to live, they’re strung out on crack. I hate going back to my hometown, it’s depressing. And there’s also the broken hearts. I have huge abandonment issues because my parents split up when I was young and I grew up on a resort where kids would come for a week and then they’d leave, so every week I’m crying. I could not hold friendships. I grew up under great circumstances that were really strange and fucked me up horribly. Now I’m just a screwed up person emotionally. I talk about the universal pain, where everybody has this huge amount of pain that they feel, and everybody hides it in different ways, and I’m just over hiding it. Life’s really really hard and it’s stupid that people pretend like it isn’t. You meet people and you meet their masks as opposed to who they are.

AB: Speaking of masks, you wear a Batman mask for part of the video for “Call Me (BATMAN).” I heard you made that video for $150 and a six pack of Heineken. How’d you pull that off?

NR: My best friend Kavan (Cardoza), he’s really cool, and he’s talented with the camera. He came out to LA. We crashed on his friend’s couch, went to dollar stores and picked up props. All the shirts I wear, I made them all, so they cost $4. I’ll buy thrift store t-shirts and cut them up. If you’re visual, there are so many ways you can make a good video where it doesn’t need a lot of money. I can’t wait to get label money to start putting towards making videos. We’ve been talking about it. What can we do with even a grand for a video? Our video would be amazing.

AB: How many people have actually called you since you posted your phone number with the video?

NR: I’ve gotten 500-600 phone calls. It’s pretty cool. I’ll tell them that they’re awesome and I’ll talk to them about whatever I’m doing, like “I’m in the grocery store, what kind of shit should I get?” Then they help me buy what I’m gonna eat.

AB: As you continue to grow as an artist, you look back at your first album, Insufficient Funds, and think…

NR: I love it. I pulled that together. Obviously I hadn’t learned everything I could have learned yet. I’m still gonna release videos off of that album. I think there’s some really good stuff there.That album took me three months to get out and with that album I’ve toured six different countries.

AB: Speaking of tours, I know you toured with R.A. The Rugged Man and Killah Priest, and you have a picture of you and R.A. in the shower making out. Are you two a hip-hop power couple?

NR: We were sort of a couple in the past, but that’s been over for a couple months. It’s whatever.

AB: Moving to your relationship with a different artist, what kind of an impact has working with Justin Warfield, of She Wants Revenge, had on your work?

NR: Justin Warfield came from the era that I grew up loving. He’s just amazing. He really understands me as a person and he really understands what I’m trying to do musically. He can see what direction I fit best in. I trust him so wholeheartedly with my voice and the vocal production and stuff like that. He’ll put on an instrumental and be like “rap to this.” And I’m like OK, I’m a rapper, I can rap to anything, and everything turns out well.

AB: When can we expect your next album?

NR: I’m not even sure if I’m working on an album right now. I think I’m gonna work on a bunch of videos. Hopefully I’ll get a deal.

AB: Let’s talk about your official t-shirt. What possessed you to create the “I Fucked Her” image.

NR: People thought I was a big hoe, so I went with it. Everyone’s like “oh she’s fucking her way to the top” and I’m like OK then, but I barely ever have sex with anyone. I make out with tons of guys, but whatever’s past making out, I don’t do that. I’m the first base bandit.

AB: Being an emcee, and having your own jewelry line, and your own clothing line, during the times you attended school were you the artsy kid that nobody understood?

NR: I was definitely not understood, but nobody knew I was artsy. I just had a notebook and I was writing cruel shit in it like this person’s a fucking bitch, or I like this guy. Sometimes there’d be poems. I was a bad kid. I was always skipping class to go write in my notebook and hang out with boys. Honestly, I skipped school since grade seven. I would go maybe once or twice a week. I was the one who was never there. People heavily questioned whether or not I went to the school.

AB: I hear in addition to not liking school you also don’t like your rap name. At this point it’s pretty well branded, so are you willing to live with being Nova Rockafeller for the time being?

NR: I’m so over it. I don’t like myself either, but I live with myself.

AB: Why don’t you like yourself, you seem to have a lot of great things going for you?

NR: Oh man, I’m just like the worst vessel to try and control. My brain is all over the place. I’m the worst person to have to be, but it’s also great, my life is great, I get to do cool shit everyday, and I’m totally satisfied with everything.

AB: Finally, you’re a very attractive young lady who looks like she knows how to have a good time. How many proms have you been asked to since you started making noise in the rap game?

NR: I’ve never been to prom. I would love to go to anybody’s prom. Sixteen year olds are asking me to marry them. I’ve been proposed to probably like a hundred times on Twitter, Facebook and on the phone, in the last five days, but no prom. I want to go to someone’s prom. Put that word out there, Nova wants to be your prom date. Let’s make it happen.