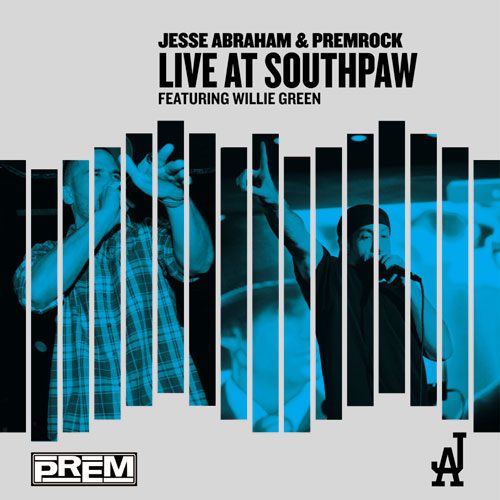 Jesse Abraham and PremRock got together for a live set in August of 2011, and as so often happens at live concerts, someone there in the venue was recording the show. Thankfully in this case it didn’t turn wind up as a poor quality bootleg of a bootleg sold secondhand on eBay. Abraham and Prem set up their OWN recording equipment. “Live at Southpaw” captured the sound of the live raps so clearly it could almost be mistaken for an in-studio recording session.

Wait – is that necessarily a good thing? I’m certainly not praising the audio quality of a third generation concert bootleg, but by the same token if you’re going to capture what it means to be “live” it has to sound a little dirty. On “JA Medley” they have to encourage the audience to make MORE noise just so you can get the feeling there’s somebody in the room with them. The audio sounds slightly distorted by the microphones and amplifiers, but in 2012 we know it’s possible to create that effect in the studio, as numerous Beastie Boys albums have shown us over the years. (R.I.P. Adam Yauch.) Sometimes it’s the belching of drunk audience members, random haters yelling shit at the stage, and miscues as the performer misses a word or a beat that helps you grab that “live” sound by the throat.

By the end of the “JA Medley” they do get that right, as Abraham does his own live cover of the OutKast classic “Bombs Over Baghdad.” You can hear that a FEW members of the audience got that it was a call and response song, but the volume of silence as most of them don’t sing along with the chorus is almost deafening. That’s a live show – when you try something as an experiment and it doesn’t work, but nevertheless you suck it up and continue for the packed venue. The duo, along with their friend Willie Green, run through a selection of their respective classics. You’ll hear Abraham’s “Spiderman On Vitamins,” Prem’s “Diary of a Dreamer,” Jesse’s “Yoga” and Rock’s “How’d You Get So Fresh,” all done live on a Thursday night.

For the most part despite being just about a little TOO clean for a live album, right down to the carefully segmented and separated tracks, “Live at Southpaw” gets things right and gets the job done. The most redeeming facet of the album though may simply be the price – FREE. That way if you own the respective albums these songs come from, you don’t feel cheated at having to pay for the same thing twice, because this didn’t cost you a dime. What it does do though is successfully promote their mic skills (which each have a plethora of) and give you a little taste of why you’d want to check them out on tour.