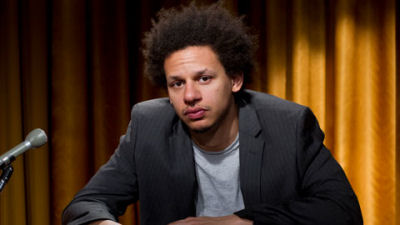 Comedian Eric Andre is having a bad day. He can’t find his bike, he left his credit card at a bar last night, and his calls keep dropping while he’s on the subway. All of that’s OK, though, because he’s having a truly amazing year. His mock talk show, The Eric Andre Show, is one of Adult Swim‘s biggest hits, he has a role on the ABC sitcom Don’t Trust The B—- in Apt. 23, and he’s been hitting the road doing national comedy tours.

On this rare day when very little seemed to be going his way, RapReviews caught up with Andre and witnessed him shrug his bad day off shoulders and embrace the positivity of his year. During our interview Andre let us know how much hard work, and stomach bile, it’s taken for him to get where he is today, why he never books comedians for his show, and his feelings on everything from YouTube comments, to coffee, to butt sex. Andre also told a story about a fan encounter that was beyond creepy.

Adam Bernard: People see the TV shows, and the stand up, and the late night show appearances, and a lot of folks may tab you an overnight success, but what had to happen for you to have all this come your way in 2012?

Eric Andre: I’ve been doing standup for a decade, so it’s definitely not overnight, unless you consider ten years a night. It’s one of the most competitive industries, so you have to always work harder than the next person. When I started doing stand up in the city I made sure I got up every single night and I was writing jokes and throwing out jokes that don’t work. When I finally got a reputation and started auditioning I had to start taking acting classes and taking that seriously. From sun up to sun down I’m working.

AB: What’s your favorite story from coming up through the ranks?

EA: In Montreal, at the Montreal Comedy Festival, I ate too much ecstasy and my eyes started convulsing, and I ran outside and tried to make myself throw up by fingering my throat, but it felt good because I was on all that ecstasy, it felt like a giant clit, so it was hard to make myself throw up. I finally goaded a little bit out and I felt fantastic. Then all these agents and managers were coming up to me and they were shaking my hand and I had like bile and vomit all over my hand and they had no idea.

AB: Did you end up meeting YOUR manager or agent that night?

AB: Which was the first phone call you received, was it from Cartoon Network, or the Apt. 23 people?

AB: When you received the second call, did you even know if you could fit two shows into your schedule?

EA: No, I was pretty terrified because I hadn’t done either, so to do two was really daunting. I was really panicking, but I was happy, too. I started meditating and it’s really changed my life because I’ve always been a ball of nerves. The nerves built up until the first day of shooting, then once you get past that first scene you’re like oh, this is gonna be alright. After that first day it’s like a huge weight was lifted off my shoulders. With The Eric Andre Show there was more pressure because my name is on the show. I’m responsible for everything, even decisions I don’t make. At the end of the day the only thing people see is me, so I have to be comfortable with any decision being made because it’s all on my shoulders. That was terrifying until the first few episodes started airing and we started getting positive feedback. I probably burned a hole in my stomach from all the acid.

EA: I know, it’s like why can’t I just enjoy the ride? I worked a decade to get here and I’m just a ball of nerves.

AB: When it comes to The Eric Andre Show, has anyone you’ve had on not gotten the joke?

EA: I don’t think anybody does. We try to tell the guests as little as possible. The best moments are when they’re completely out of their comfort zone. We specifically avoided booking comedians because comedians would understand it immediately. We were reaching out to like Mark Harmon from NCIS, and other serious actors. We reached out to Maya Angelou. We’re trying to get Charlie Rose and Gucci Mane on the show at the same time so they can interview each other while I interview them. We wouldn’t reach out to comedians, or savvy people that understand Adult Swim.

AB: I really liked the Tatyana Ali interview where you were hitting on her the entire time.

EA: That’s one of my favorites, too, especially because Hannibal (Buress) and I spend the whole time asking her out on a date and by the time she finally tries to answer she’s interrupted by Doc Chicken. I think Doc Chicken was probably the biggest hit of the series so far. Tommy Blacha actually came up with that one. We were scrabbling our brains trying to come up with the funniest, clever, intellectual kind of thing, and he was like no, let’s come up with the stupidest thing we can think of. How about a chicken who’s a doctor, we call him Doc Chicken, he walks out and he has a stethoscope on for no reason. I’m like, green light!

AB: Earlier you mentioned feedback, and I’ve noticed in the comments section of your YouTube clips, and yes I realize that’s not exactly where our world’s brightest minds gather…

EA: Oh, I black that out. It’s just racist twelve year olds. I can’t stand YouTube comments, even for other people. I canceled my YouTube page. The videos I make independently I only post on Vimeo and I don’t allow for comments. I think the concept of leaving comments on somebody else’s video is such a bad idea. I don’t know why that’s the standard for internet video players.

AB: Speaking of standards, last week there was a big story about Daniel Tosh supposedly going over the limit with a rape joke, and I say supposedly because it’s been told to us second hand. Can you recall a time where you’ve gone over the limit, even if you’ve caught it in the writing process, before you took it to the stage?

AB: When someone gets offended at something a comedian says your first reaction is what?

EA: It’s case by case. I think sometimes the audience doesn’t get it, and certain words or phrases, no matter how you put them, are trigger words. Somehow Louis CK gets away with it. I think there’s intelligence behind the joke, and you can tell he’s just joking. At the end of the day the only goal is to make people laugh. I think every comedian is trying to make you laugh, nobody sets out to just purely offend. Tosh, all these guys, I don’t think their goal is like “I can’t wait to offend a large group of people today!”

AB: Doing stand up means you get to meet a lot of your fans. Do you have any particularly memorable fan encounters?

EA: The other day in San Francisco everybody was so awesome and so nice, and then this one guy was like, he didn’t blink the whole time and he was like “hey, my girlfriend makes me watch Adult Swim.” I’m like that’s cool. And he’s like “my name’s Erik, you’re name’s Eric. I spell mine with a k, we can’t be friends.” I’m like alright dude, thanks for coming to the show. I’m trying to just be like alright, keep it moving. He’s like “I like Tyler The Creator on your show.” I’m like nope, that’s the show after me, but I can try to maybe get his email for you and you can tell him yourself. Then he was just catatonic. It totally killed my buzz. It was so freaky I could not even handle it. It was like he was on special k.

AB: And I’m guessing not the Special K you buy at the grocery store.

AB: We have some interesting stuff here.

EA: What’s the furthest you’ve ever gone with a girl?

AB: I’m not married, so I haven’t gone that far with a girl.

EA: I’m talkin like butt sex. Have you ever done butt sex?

AB: Honestly, it’s not even an interest.

EA: Never had an inclination? Me neither. I’m the same way. I think it’s just like a novelty and it really serves no purpose because I think vagina, what’s gonna feel better than a vagina?

AB: It’s like OK, the butt’s there, but there’s something so much better only a few inches away.

EA: Exactly. If I’m having sex I’m pretty satisfied just with the fact that a girl is letting me have sex with her, but some people are into it.

AB: By the way, I noticed you waited to talk about butt sex until you were off the subway.

EA: No, I was getting back on the subway and I was like alright, now I can talk about butt sex. {*sees a coffee cart*} Oh God that coffee looks fucking good! I’m such an addict. Should I get coffee now?

EA: I’ve been getting these really bad coffee crashes. It’s a little bit of a good, for a lot of a bad feeling.

AB: If you don’t stop drinking it you won’t get the crash.

EA: Are you a coffee drinker?

EA: I don’t really fuck with that shit because I don’t know what’s in it. I feel like I’m drinking 409 cleaner, or something. I’m not trying to lecture you, I’m worried about you. I’m genuinely concerned.

AB: Knock on wood, I’m 33 and still kickin. Switching from 33 to Apt. 23, tell me about your first encounter with James Van Der Beek.

EA: James is a sweetheart, man. He’s one of the nicest guys you’ll ever meet. I think it was my first wardrobe fitting. He’s a genuine guy.

AB: Finally, since I am a big fan of the show, do you know where I can get a copy of Tall Slut No Panties?

EA: Oh shit! Dude, I will hook you up. If it still exists somewhere in the art department’s closets it’s all yours.