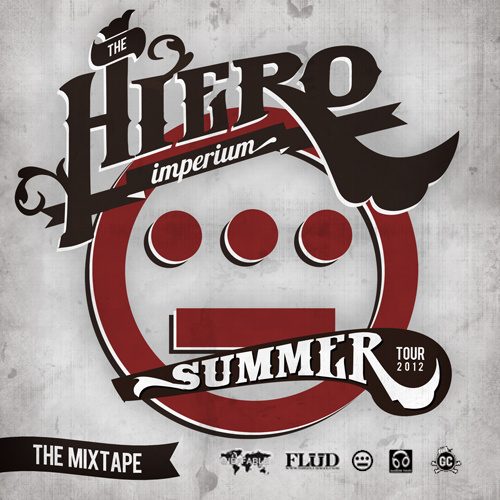 To support of their 2012 summer tour, the Hieroglyphics Imperium has released a brand new mixtape compiling together the cream of the crop from their various recent releases, along with one new remix never heard of released before anywhere else. The pricing structure for this album is innovative and laudable, scaled up from free (for the album itself) in $5 increments. If you just want the music, click on the album cover and get you some, you’re done. $5 will get you a pack of Hieroglyphics stickers along with the download. $10 gets you the stickers and an exclusive Hiero keychain. $20 is a hellafied value though – it gets you all of the above AND a t-shirt you can rock when they hit your town on tour (or any other time you want). Trust me, they appreciate it when you wear the merch at a show – it’s nothing but love from the Hieroglyphic fam for knowing you appreciate them enough to cop and wear their gear.

Since there’s only one track completely exclusive to this release, it’s worth speaking on that one for just a moment – the Souls of Mischief “Home Game” remix by Nima Fadavi. The original version is from 2009’s slept on “Montezuma’s Revenge” CD. Unfortunately for me at least that makes a remix problematic, because when I reviewed the album it wound up in the coveted category of The Nines, so to me any attempt to remix the songs here is like trying to add an extra brush stroke to “The Starry Night” by Van Gogh. At best it’s laughable to think you can improve on near perfection, but what’s worse is that you’re going to ruin a priceless masterpiece. Thankfully music is more open to being touched up than classic art, so I don’t find the Carribean sound of this remix horrifying, but it DEFINITELY isn’t better than the funky fresh original produced by rap legend Prince Paul.

Back to the album as a whole though. “The Summer Tour Mixtape” is a bit lacking in contributions from Hiero founder Del the Funky Homosapien, although he does at least have a cameo on Pep Love’s posse cut “Can’t Nobody Do it Like Us.” That’s forgiveable though since undoubtedly the intent of the mixtape is to focus on the people actually ON the summer tour: Souls of Mischief, Pep Love, and Casual. Both of the latter’s contributions are from “He Still Think He Raw,” and of the two I prefer the whimsical “Sushi.” Pep Love’s three contributions are all from “Rigmarole,” which you should probably pick up if you haven’t, though I think I enjoyed it more than my colleague Patrick. The real treats though are the solo tracks by Opio and A-Plus, including the latter’s “Can’t Stop,” which samples the Red Hot Chili Peppers song of the same name.

As often happens when labels such as the Hiero Imperium or URBNET Records release compilations, “The Summer Tour Mixtape” is a challenge to the die-hards who have long since bought and supported all of the artists and songs featured within. In fairness though, you don’t HAVE to buy it, so it’s hard to knock it. You can download and enjoy a free mixtape if you like, or you can kick it up a notch and get some schwag back for being down with the Hieros. Whatever you choose to do, the most important thing TO do is catch the crew when they roll through a city or venue near you.