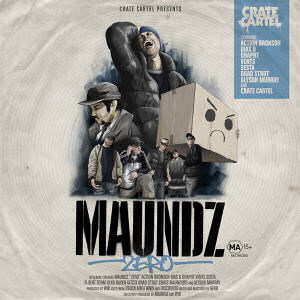 The influence of early nineties New York hip-hop on Australian hip-hop is so pronounced that you can probably track down a Patient Zero who was the first one to start bringing over records by Gang Starr, the Wu-Tang Clan, Jeru The Damaja, and the D.I.T.C. crew from New York to Melbourne. From the Australian hip-hop albums I’ve heard, I get the sense that they never experienced the jiggy era, never got seduced by the slippery drawl of Southern rap, and haven’t traded their MPC’s for Fruit Loops yet. On his sophomore album “Zero,” Melbourne MC Maundz keeps it true school, Aussie style.

Maundz is from the rowdy, shit-kicking school of MCs that include Vinnie Paz, M.O.P, and DMX. He yells his rhymes like threats, and seems just as likely to give rival MCs an actual beatdown as a verbal beatdown. The epitome of this is “Maundzilla,” where he imagines himself as a Godzilla-sized rapper.

“First name Maundz, last name Zilla
But y’all civilians call me Mr.
Bob bob cop one to your mug
What now little rapper got a gun?
Little bit of gusto well done, bravo
Bullet in the gullet make a fella go nutso
[…]
Ain’t no game like pillage and burn
Take ’em all out, city to the burn
You got dirt, we got worse
And that’s my motherfucking word”

While Maundz barking flow brings energy, it lacks finesse. Even on mellower, downtempo tracks like “Take It Back” he’s still rapping at 11, sounding like he’s about to rip someone’s head off. The limitations to his style are made clear on “All Quotes” when Action Bronson shows up to give some Ghostface-inspired verses. Maundz rhymes are as complex as Action Bronsons, but the Australian rapper’s delivery lacks the style of the former chef from Brooklyn. Of course, criticizing Maundz for lacking finesse might be like critizing a boxer for sucking at ballet. That’s not really the point. You want subtlety? Go listen to another rapper. If you want someone beating you over the head with aggressive rhymes, then Maundz is your man.

The album is entirely produced by Wik, who plays Eric B. to Maundz Rakim. Wik lays down banging sample-based beats for Maundz to work with. The two make for a nice pairing, with Wik either matching or tempering the aggression that Maundz brings. “Maundzilla” is as bombastic as a Lex Luger track while “All Quotes” and “Take It Back” are more soulful. The production on all 20 tracks on the disk are strong and are further proof that Australians know a thing or two about hip-hop production.

At 20 tracks, “Zero” was a little too much of a good thing. I found Maundz aggressive delivery a lot to handle for an entire album, and this is from someone who loves Death Grips. Guest spots by Aussie rappers Drapht, Brad Strut, Bias B, Vents and Sesta add some variety, and Wik’s production is a constant strong point. Maundz is also a solid lyricist, whether he is repping his city and Crate Cartel crew or rapping about the seedy side of Melbourne. If you like your hip-hop rowdy and as hardcore as it wants to be, Maundz brings the goods.