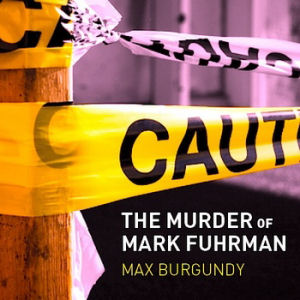 Max Burgundy has perhaps the most intriguing back-story of any artist I’ve reviewed in recent memory. Born and raised in the Bronx, Burgundy’s first major obstacle was the loss of his father, who was murdered right across the street from his home, causing his mother to move the family to Southern California. Torn between his love for basketball and the dangerous gang culture the pervaded the area, Burgundy took a somewhat lackadaisical approach toward high school and ended up pursuing his basketball career at a local community college. It was there that he discovered his interest in philosophy, and he ultimately parlayed this interest into an Ivy League education, which was unfortunately cut short by a drug distribution charge that led to his expulsion. With this in mind, I was interested to see what kind of persona Burgundy would take on as an emcee and, more specifically, whether he would stick to his East Coast roots or adopt more of a West Coast flow.

It’s clear from the beginning that Burgundy doesn’t shy away from his troubled past, and his willingness to open up and vent his frustration allows the listener to better understand all that Burgundy has overcome thus far in life. The opening track, “Momma Tol Me,” sees Burgundy spit about the pressure his mother put on him growing up to succeed and make money, and the lack of any percussion to accompany the crooning orchestral strings ensures the spotlight is centered on his lyricism. Next up is “Born Loser,” which has more of a classic hip-hop sound with a soothing violin loop over heavy, boom-bap drums. Burgundy spits a powerful first verse, rapping:

“Once upon a time not long ago
1985 was my debut show
And there’re very facts that they do know
But deep in the Bronx they do grow
Call ’em the weeds of the city I suppose
I’m in the horse stance practicing my kung-fu
Wondering what set you claim, and who the fuck brung you
I’m from where the guns rise faster than the sun do
Either way you getting burned
From where the only sentences we finish are prison terms
Smoke weed and read books
Four finger rings brass knuckles and bad looks, you can’t prevent it
White man preaching the Bible, but praying for eugenics
Streets named after one of Satan’s appendages
Baptized in Spuyten Duyvil Creek
Pleading for survival as we speak”

As the mixtape progresses, it becomes clear that, although Burgundy often references his days growing up in the Bronx, his flow and delivery, as well as much of the production, are clearly influenced by his days in Southern California. “Blasphemy,” for example, features gliding synths, soft horns in the background, and a slow, head-bobbing drum loop, with Burgundy’s equally smooth delivery to complement, giving the track a mellow, West Coast feel. But while Burgundy certainly has a distinctive style, by no means is the mixtape lacking in variety, as his ability to weave tales of his past with more upbeat rhymes, combined with quality instrumentals from a handful of different producers, makes for an engaging listen throughout. “BX 12 (Bus Ride)” sees Burgundy spit about finding love in an unlikely place, and as I listened to his clearly articulated rhymes and noted his knack for storytelling, I couldn’t help but compare his style to that of Slug from Atmosphere. “A Son’s Response” and “Push” are both piano driven beats, as Burgundy displays an impressive ability to intermix some tongue-twisting rhymes with his normal drawn-out flow. “I Was Thinkin Babyâ€¦,” on the other hand, has a more upbeat feel, complete with an uplifting bassline and high pitched organ keys. Finally, there’s “Downtown Dreamin,” which incorporates a sample from The Cranberries’ “Dreams” to make for one of the catchiest songs on the mixtape.

The album isn’t without it’s faults, though, and while there is little filler material to be found, there are a couple songs that don’t measure up to the rest of the mixtape. “A La Mode” has a funky but slightly unnerving beat, and Burgundy’s effort to slow down his flow to match the pace of the beat makes for a lackluster song with somewhat materialistic lyrics. But such tracks are far and few between on “The Murder of Mark Fuhrman” and do not take away from the fact that Burgundy’s latest release is an insightful look into the Bronx native’s tumultuous past and promising future. The emotion that he brings to the mic can be heard in nearly every song, and his straightforward delivery makes it easy to absorb all that he has to offer. And given the range of instrumentals, there is likely to be something for everyone, as there are a number of traditional, sample driven hip-hop beats mixed with more experimental tracks. Regardless of what coast you support, anyone looking for an intelligent listen from an artist who doesn’t fit the traditional profile of a rapper should not hesitate to give “The Murder of Mark Fuhrman” a listen.