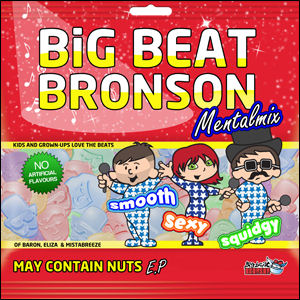 Earlier this year, Baron Von Alias and MistaBreeze released “Brace for the Impact” which both Steve ‘Flash’ Juon and myself agreed it was destined to be a hit at the dance clubs, but not really anywhere else. He respected the project for what it was, but in short, it was not his cup of tea. Fast forward to August and now we have Big Beat Bronson, a collective made up of Baron Von Alias, MistaBreeze, Eliza Lawson and DJ LKP. To be honest, in some ways the collaborative effort reminds me of The Electric which consists of DJ Vadim, Pugs Atomz and Sabrina Jade. The “May Contain Nuts EP” has been in the works for awhile and has finally seen the light of day. We’re presented with six tracks spanning nearly 22 minutes in length that come in a variety of flavors as we begin the taste test.

The opening track “Move With It” switches back and forth between having a pop feel to it to something more industrial in nature. “Action Man” is a fun track filled with braggadocio and not to mention a reference to the late, great ‘Macho Man’ Randy Savage that Steve Juon would undoubtedly appreciate. In fact, the video features a would-be Randy Savage impersonator that comes complete with a championship belt and looks like a life-sized version of the popular Wrestling Buddies from the 80s. Eliza Lawson finally gets more of the spotlight on “Nothing” and “Sorry.” The former starts off appearing to be the track that finally slows things down here before the tempo kicks back up and the guys go on about relationships gone awry. The latter actually does slow the affair down some with another tale of love that has unfortunately reached its end. Fans looking for an alternative to the other tracks on the EP will probably gravitate towards “Get Wild, Gan Mental” which seems like it would be a hit with breakdancers. Lastly, the EP closes out with the noisy and busy “New Me.”

The members of Big Beat Bronson are each talented enough that they could excel on their own. Baron Von Alias and MistaBreeze have both already proven that and the voice of Eliza Lawson could carry any album. I wish she could have been featured just a little bit more, but on an EP I suppose it’s expected that everyone may not have the same amount of time to shine. I like the experimentation here and while the lyrics don’t get too complex most of the time, it’s easy to tell that BVA and Mista could take it there if need be. Consume at your own risk, but as long as you are open to trying new things…you should be alright.