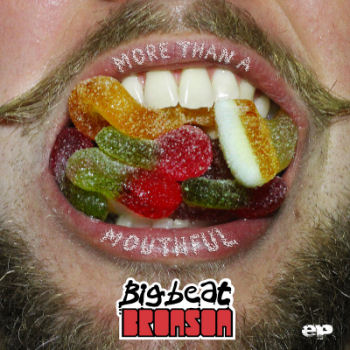 We’re just a couple of weeks removed fromUK Month here at RapReviewsbut that doesn’t mean that there’s any shortage music from across the pond. Here in the States, most Americans just finished observing the Thanksgiving holiday, but the collective known as Big Beat Bronson is hoping that you’ve saved a bit of space for a few more bites with their “More Than a Mouthful” EP. Big Beat Bronson is comprised of Baron Von Alias, MistaBreeze, Eliza Lawson and DJ LKP. The group initially emerged in 2012 with their first release, “May Contain Nuts.” I’m starting to sense a theme here. With the addition of G-Force on guitar, Colonel F. Hoff on the bass and Arnie on the drums, the group has promised a more evolved sound.

Contrary to the name, “More Than a Mouthful” is a rather lean serving of four tracks (five including the clean version of the opening track) After a few plucks on the bass guitar, the big beat (sorry) kicks in and “Look Lively” gets the meal started. The pop-sound leanings of Eliza Lawson are the perfect counterbalance to the oftentimes aggressive raps of both MistaBreeze and Baron Von Alias. The horns on the track are a nice touch and gives the number a slight big band or perhaps a superhero theme feel to it. “Kicks” also follows a similar path, which isn’t a complaint by any means, as both tunes are easy to listen to and catchy as hell.

The EP closes out with “Big Beat Bronson” and “Break”. These two tracks are a bit more frantically paced than the previous two, but the same quality is still there. The former is an official declaration of what the crew is all about and they’re beating their proverbial chests in the faces of any would-be competition. The latter, “Break,” is probably the least danceable track of the project, but more outstanding guitar work helps to give it an edge that falls right in line with the song’s lyrics of rebellion and perseverance.

Being two EPs into the collective that is Big Beat Bronson, they have done an exceptional job so far. It leaves one to wonder what they could be capable of if they shifted their focus to a larger project. Perhaps that’s part of Big Beat Bronson’s diabolical plan to take over the world bite by bite. If that’s the case, it just might be working. We’ll jam out to these hors d’oeuvres until the next serving is ready.