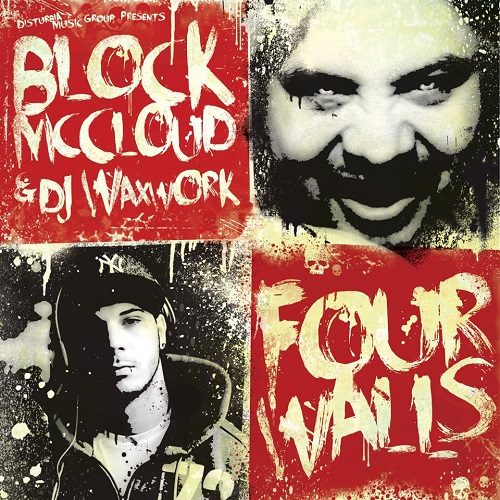 If you like gritty, nasty, heavy and brutally beautiful East coast hip-hop, then you already know Block McCloud like the palm of your hand. You’ve heard him singing or rapping hooks on classics like “Mess You Made” by Sean Price and “Style Wars” by Jean Grae, you’ve heard him as part of the rap supergroup Army of the Pharaohs, he’s been featured numerous times on songs with Jedi Mind Tricks and Vinnie Paz, and he even has a couple of underground albums of his own like “Spitting Image” and “I Was Drunk When I Made This.” That’s a hilarious title, but Block McCloud is no joke, as I found out firsthand when I interviewed him for RapReviews.

“Four Walls” with DJ Waxwork is a “me and my homies” kind of album, which is both indicative of his musical generosity and his tendency over the years to let other people take the spotlight he deserves. It’s hard to knock it given the quality of the collaborations he does. Take “True Lies” featuring Hasan Salaam and Vinnie Paz for example, one of the most haunting songs to come out in 2012. It’s not just the violin backdrop that makes it eerie – it’s the conspiracy theory lyrics from Paz that eat into your brain.

Paz: “I’ll admit that Obama had me believin the hype
But after doin the knowledge I ain’t been sleepin at night
Probably the biggest deception I ever seen in my life
If y’all don’t read between the lines then y’all ain’t readin it right
Yeah! Vinnie Paz just a motherfuckin trooper steppin
Nuclear anxiety and the code of the super weapon
Obama and Bush cousins and that’s a true connection
Seizin power and property like a ruthless henchman”

Nearly every song has a similar cameo, and while not all of them upstage the talents of McCloud, it’s not hard to see from this list the potential for them to do so: Ill Bill on “Dexter’s Lab,” King Magnetic on “Hurricane McCloud,” Kyng Syze and Demunz on “Beneath the Surface,” Diabolic and Thirstin Howl III on “Killer Karnival”… need I go on? Yes I do, because one of the best songs of this entire album is “Led Zeppelins” featuring every emcee’s favorite emcee – Reef the Lost Cauze.

“Brooklyn to Philly niggaz, don’t ever fuck with them
The 2009 version of the gutter twins
We slaughter dudes, venom over farce crews
The flow is futuristic without AutoTune
Get your smarts soaked in an alley in Park Slope
Dog I swim in the same waters the sharks float
Call me Reezy Jaws […]
Been nice since Michael Jackson was havin fuckin knife fights”

2009? Well that’s an issue to address. Block’s been on so many tracks on so many albums over the years, released and otherwise, that even though “Four Walls” is a 2012 album it has SOME tracks that a Block McCloud fan would have heard before. They do try to dress things up though, such as adding an extra verse to “True Lies,” which I do appreciate. And when Block does put his friends to the side, he reaches through the speakers and delivers his heartfelt emotions on songs like “Try”:

“I’m tired of tryin, it’s time that I do here
I’m tired of tryin, I’ve tried so hard
It’s like I, get so close and yet so far
that I only gets as far as my Metro Card allows
And it’s like I’m, browsing and window shopping
I try to right/write the wrongs but my ink flow is stoppin
My pen’s dried out, my tears is cried out
The years just ride out, while teams is tried out
Cheerleading, they supposed to be offensive lineman
But reclined, settle for standing on the sidelines
Watching – the rest of the world succeed
The boys brown nose, the girls suck seeds
From dickheads”

As intelligent and articulate as Block McCloud is, there’s no reason for him to not take the forefront on more songs like these. It’s both inspiring and frustrating to see Block still making music after over a decade in the rap game, and yet find that his somewhat scattered approach to hip-hop has resulted in him making dozens of people better yet not furthering his own career. You can’t fault his generosity, good intentions, or the quality of the music on “Four Walls.” You can at times though feel that Block is trapped behind those walls though, and needs someone to come along with a sledgehammer to bust him out and give him a chance to truly shine without any limitations.