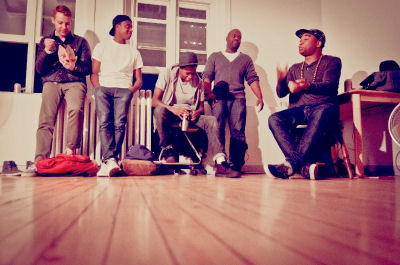 There’s an old adage that one shouldn’t mix family with business. It’s a good thing Winnipeg hip-hop group The Lytics didn’t listen to that advice, as their latest album, They Told Me

Made up of brothers Andrew, Anthony, and Alex Sannie, as well as cousin Mungala Londe, and newly “adopted” brother DJ Lonnie Ce, The Lytics have a pure hip-hop vibe that will remind people of when musicality and lyrics were at the forefront of the genre.

RapReviews caught up with Andrew and Anthony of this family first group to find out more about their music, and their latest album. The duo also discussed their definition of success in the modern music industry, the image of their hometown of Winnipeg, and the moment they realized their working together was going to work out.

Adam Bernard: You just released an album titled They Told Me

. Who’s the “they” you’re referring to in the title?

Andrew Sannie: We actually have a song on the record called “They Said” and we kinda took the name of the title from that song. The idea of the song is our aspirations coming to life. People are telling us this is what’s going to come of your life, this is where you’re gonna go with it, and it kind of ties in with the little kid on the cover and the back (of the album). It’s growing into what you believe you’re gonna become, and who you are, and eventually, finally, making it to that place.

AB: When you listen to this album what are you most proud of?

Anthony Sannie: All of us come with a different outlook on things, so for me it’s just the mixture of everyone’s individual ideas. There’s just such a big difference in the types of subjects some of us talk about, but at the end it just ties in well together.

Andrew: The thing I’m most proud of is the growth. If you compare it to our last record, it’s like night and day, for me at least. I feel like as artists and musicians, and creators, it’s just grown leaps and bounds. It’s sort of like, for me, if another record comes after this I feel like it’s a good pacer, we can see where we’re gonna be, and eventually we’ll be able to make something bigger, and this is sort of the proof of that.

AB: You said eventually you’ll be able to make something bigger. Where does this rank for you on the ladder of success?

Andrew: This is like the first step. I just feel like there are a lot bigger things to come and we’re only getting better and better. Even if success never follows this record, or the next record, or maybe never ever comes, I feel like the music is getting better and that can be successful, right? At the end of the day not everybody achieves success in the way that it’s looked at in our society, but as people you can find success in just being a better person, or a better musician, or better artist, and I feel like we’re going to keep growing in that way.

AB: And on the flip-side, there are people who see success that are terrible artists.

Andrew: Right, and that’s sort of the thing. The music industry’s so confusing, right? Nobody really knows what it takes to get there. You meet the right person and the next thing you know you’re the biggest thing in the world, or some blog decides these guys are amazing and then all of a sudden you have a career. Because it’s so fickle, and there’s no way of telling whether you’re gonna make it or not, you can’t sit there and be like success to me is being the biggest artist, or the next big thing. Success has just gotta be being the best you can be and putting out the best music, and if you’re meant to go there then it’ll happen.

AB: You’re a group of brothers. Being an only child I don’t fully understand the brother dynamic, but I do see friends of mine who are brothers have knock down drag out fights and the next minute be cool again. Does anything like that happen when you’re writing and recording?

Andrew: Oh yeah. At the beginning of this record it was like war in the studio. Someone would storm out every day for the like the first three months. It was like complete chaos. It was almost like we weren’t getting any music done, because after like three months of recording we had like one song, maybe, and a bunch of little pieces, and I think what that period was, was us learning how to actually work together. Once we did finally get over that hump where we were in a state of constant war, we figured out how to work together and the songs just started pouring out. We would come in and bang out a song, and the next day the same thing.

Anthony: It was hard because before this record we had just put out one nine song EP, and then we turned it into the first album. So we had been around for a few years, but we really still were a new group. It was pretty hard. I think the biggest test was going on tour, because usually when you go on tour there are lots of fights, lots of arguments, but there was one tour we went on across Canada and I remember there not being one fight and that was when I realized wow, we’ve come a long way, I think good things are going to come out of this.

Andrew: We’ve learned how to be professional, so the fighting is almost at a minimum now, and if we do fight it’s a super business type arrangement as opposed to two brothers fighting.

AB: In retrospect is there one fight that stands out as being especially ridiculous and unnecessary?

Andrew: When we first started recording this record, I can’t remember what we were fighting about, but it started as an argument, and Anthony, for some reason…

Andrew: That was three years ago.

AB: Wow! It’s a good thing those days are over. Moving to your hometown, you’re from Winnipeg. I’ve heard there are some not so nice parts of that city. Are there also parts of it where there’s a music scene?

Andrew: Yeah, the music scene in Winnipeg is awesome. I think we have some of the most talented musicians in the world. You can go out just about any night of the week and find an amazing artist playing. The thing is a lot of people don’t realize, they talk a lot about how Winnipeg, there’s a lot of bad parts in Winnipeg, but we don’t look at ourselves as a bad city, we look at ourselves as a super artistic, creative, place, and there’s so much good music that’s come out of here, and so much good art that’s come out of here. It’s kind of sad that people outside of Winnipeg have this idea that we’re just this dangerous crazy place. Yeah, there is poverty in areas, and there’s a lot of bad stuff in areas, but there’s also a lot of good. The Osborne area. There are a lot of artists coming out of there, and great venues. And the West End, which was once considered a super dangerous place, you have a lot of musicians living there, and a lot of young artists coming out of there.

AB: Has Drake’s success in crossing the border and becoming a star in America given hope to the Canadian hip-hop scene that success in America is a real possibility?

Andrew: Both yes and no. I think Drake’s success in the States is big because it shows people down there that there are serious people up here. I think there was a while when there were no artists breaking out from Canada as far as hip-hop, and music in general. I heard some stat that before Drake the last artist to break out of Canada into the States was Celine Dion. That is a long gap. Since then think about all the artists having success, even just as recently as Carly Rae Jepsen, and before her Justin Bieber. There are artists coming out of Canada, The Weeknd, and all these other guys, but I think Drake sort of was an icebreaker in a way, where people started looking into Canada and saying whoa, they have talent over there. So he did open the door, but at the same time, let’s face it, there are a lot of machines pushing these guys, and a lot of this game is politics, so you have to have the right people behind you before you get there, so it is realistic to come out of Canada and become the big thing in the States, but you also need the right people to be looking at you. It’s realistic, but at the same time it’s a pipe dream.

AB: With that realistic pipe dream in mind, what’s been the greatest hurdle you’ve had to overcome?

Andrew: I think the greatest hurdle we’ve had to overcome is this record. This record was the hardest thing I’ve ever done. It’s a struggle, and especially at the stage where we’re at where, you’re just trying to get more people to hear you, you just want more people to know about your music, especially when you feel you’re a good artist, and you feel like “I’m putting out good music, why aren’t people listening to it? We need to get people to hear it.”

Andrew: It’s a super frustrating feeling because you’re just like “I just want people to hear what I’m doing.” It’s one thing to put out bad music and have a ton of people hear it and go “yo dude, you suck.” Then I’d be like hey, I guess I suck, but to put out good music and have people tell you “this is amazing, you’re my favorite group, I love what you do,” it’s like wow, people actually like what I’m doing, why aren’t other people hearing it, why aren’t other people on board with it? That part of it’s frustrating. The reality is we don’t have a ton of people working with us. We do most of what we do alone. Just about everything you see is us putting in the work, is us hiring the people who are gonna shoot videos, do a website, and all that other stuff. It’s tons of work, especially when you’re working full time, and you’re in school full time. Everybody would love to be the guys that are doing music full time, but there are only a handful of people who are actually doing that, and can afford to do that, so it’s difficult, but it’s also part of the stuff, and it’s gonna happen for us.