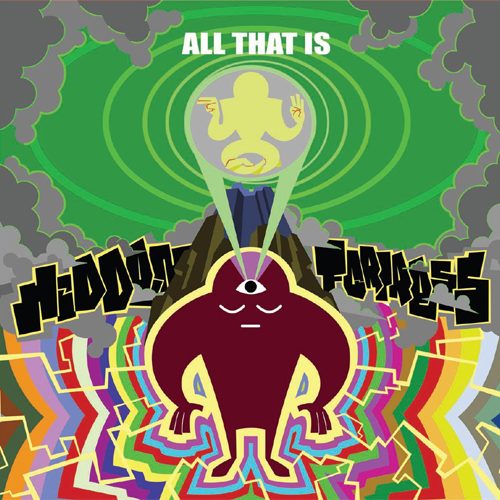 Three months ago in a review of their EP “Third Eye Cyclops” I wrote, “It’ll be interesting to see what Hidden Fortress pulls on their next full-length.” I didn’t imagine the opportunity would present itself so soon, but lo and behold “All That Is” arrived in my mailbox this week. Clocking in at under 29 minutes it occupies territory somewhere between an EP and an LP and features nine new tracks from the Canadian duo of rapper nofutureface and producer UsdNeedls.

Hidden Fortress has a unique sound, and “All That Is” picks up right where “Third Eye Cyclops” left off. There’s a great sense of foreboding in their music that’s impossible to overlook, and UsdNeedls’ production is heavy with dark, distorted guitars and emphasis on percussion. On “All That Is” he frequently lifts clips from speeches and monologues that can have an eerie effect but ultimately proves a little mystifying, which might in fact be his intention. nofutureface has an unusual, ghostly-sounding delivery that vocally reminds me most of Rage Against the Machine’s Zach de la Rocha. His apocalyptic, stream-of-consciousness verses are a smart match for UsdNeedls’ sound but tend to lack the punch so crucial in this brand of dark, conceptual rap.

“All That Is” sounds like one long song. The tempo never changes, the instrumentals are fairly static, and sometimes it seems like multiple songs have the same drum pattern. The ominous sound does have the propensity to be powerful, but often nofutureface fails to build upon the political tones evoked in UsdNeedls’ vocal bites, opting instead for rambling verses ripe with apocalyptic imagery. “The Cure” opens with a lengthy clip from a speech assessing the United States’ dying political culture, but as is often the case nofutureface seems to rely more upon his unorthodox vocal style than lyrics. The duo is very effective in creating and exploring a mood, but more often than not that’s all they do. “Apotheosis” featuring Modulok is characteristic of a standard performance from both members:

“This is the time when we all come hither
Slither ’round the fire, watch the eyes grow bigger
This is the time when it all just ends
Damaging the dream, the skies, lies, and sins
Exact figures, replicas of men
Sittin’ on the sideline just watchin’ it all end
Catastrophic lenses, time just bends
Flippin’ at the corner just watchin’ it all spin
Homegrown terror, Medusa without fangs
Blood on the altar, communication of men”

nofutureface’s laundry-list style verses are deeply sinister but ultimately lacking. “Psychonaut” opens and closes with philosophic bites about time and human priority, and nofutureface responds with some of his most substantial raps on the disc. “Rich Folks” is a typically gloomy collaboration with Planit, and “Slangshot” features Kaigen rapping in Japanese.

Hidden Fortress is wise to keep their releases within the half-hour limit, because their one-dimensional sound offers few surprises beyond a song or two and tends to grow tiresome after more than a few. While it is compelling in small doses, their apparent inability to make even slight variations upon their framework doesn’t have me salivating for their next record. There may be a message laden somewhere within Hidden Fortress’ music, but I sure as heck can’t figure it out.

Hidden Fortress :: All That Is
4.5Disappointing
Music4.5
Lyrics4.5