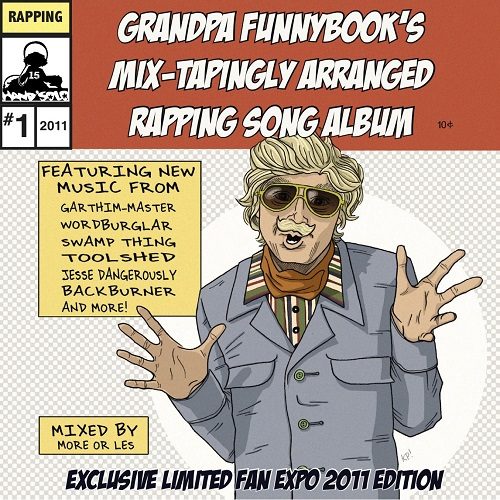 As you can probably tell from the title of this “Mix-Tapingly Arranged Rapping Song Album,” Hand’Solo Records is a bit more lighthearted and care free than your typical rap label. In fact, this album was a limited edition for the Hand’Solo Records booth at the 2011 Fan Expo, Canada’s version of ComicCon. You most likely wouldn’t find Def Jam or No Limit setting up shop at ComicCon at any point, but Hand’Solo Records doesn’t take itself too seriously. Their laid back and humorous approach to rap music is refreshing and this collection of tracks does a great job of giving the listener a feel for what the label is all about.

The format here is easy to digest and effective. With 20 tracks, after subtracting the intro and outro, the songs rarely exceed three minutes. The short tracks allow you to experience all the music without feeling inclined to hit the skip button too often. The main thing that stands out when spinning this album is the references to sci-fi/comic/video games. Backburner’s “Phantom Ghost” samples a video game (though the name evades me) and the emcees drop rhymes referencing everything from “throw a quarter in the slot” to “floating dope like hovercrafts covered in grass.” One has to wonder whether “Wookie Boots” was Toolshed’s nerdy response to Wale’s “Nike Boots,” though the lack of a hook on this track hinders its replay appeal. “Metal Man” by Random is one of many Mega-Man inspired tracks Random has dropped in the last few years and while not new is certainly at home on this mixtape. The Star Wars references continue on “Dude Where’s My AT-AT at?” and the combination of Star Wars and Ashton Kutcher’s cult movie hit is really impressive and entertaining. It’s no surprise that the zombie fan in me considers “All About the Brains” the best track on here as Swamp Thing and Timbuktu do a stellar job of trading verses as both zombie and survivor. If “The Walking Dead” needed a new a theme song, this would be the one I would recommend.

While the album isn’t all about pop culture references, the emcees still find a way to keep things quirky on the rest of the album. MC Frontalot gives us a hilarious look at modern living with “First World Problems:”

More Or Les gives us another funny perspective on the ordinary annoyances in life with “Gold Digger Pt. 3” where he implores:

“Yo, you picked your nose on the bus â€“ What the fuck!?
Not a kleenex in sight you can touch â€“ Yo, you suck.
And I can understand why a 50 year old man in public would think that’s a must”

Stories like this don’t fit the glamorous lifestyle usually promoted by rappers, but touch upon the everyday occurrences most rap fans likely experience, even if they probably don’t admit it. Further, it actually takes skill to rap in an entertaining and engaging way about these things and rappers like More or Les and Wordburglar definitely have those skills.

Overall, “Grandpa Funnybook’s Mix-Tapingly Arranged Rapping Song Album” has something that will appeal to most rap fans. It’s not something that I see myself playing from start to finish, but then again, nowadays what is? Those songs that do stand out definitely are dope enough to warrant future spins. Fans of sci-fi/comic type things will likely find more appeal in this mix with the abundance of references found here, but anyone with a sense of humor should appreciate this CD.