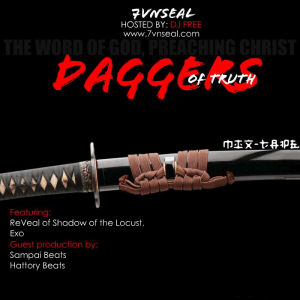 When tackling Christian hip hop, I can automatically tell whether I will enjoy listening to it by how much the rapper talks about Christianity. Don’t get me wrong, I love spirituality in hip hop. Killah Priest and Cyrus Malachi are two of my favourite MCs, but there is a key difference between religious rappers and rappers who happen to be religious; religious rappers rap about their religion, rappers who happen to be religious (such as Braille or Brother Ali) rap about a variety of topics and may mention their beliefs now and then. 7vnseal being a minister, falls firmly into the first camp.

A former affiliate of Killarmy; themselves affiliates of Wu-Tang Clan (presumably this makes 7vnseal an affiliate affiliate?) 7vnseal grew up in gangs, associating himself with the street hustler lifestyle. He had a passion for rapping, and working with Beretta 9, Dom Pachino and Shyheim the Manchild enabled him to portray his streets raps to an audience that appreciated grimey tales from the hood. Thankfully “Daggers of Truth” has that trademark Wu-Tang sound and being a mixtape, utilises numerous Wu instrumentals that even the most stubborn atheist can nod their head to. “Servant to Christ” starts things off nicely with a passionate delivery not too dissimilar to Killah Priest’s early work:

“I ran through the cemetaries
Mental apocalypse, episodes is what I used to call them
But one day I see a boat and out came the son of God
The Christ…”

The unorthodox rhyme patterns remind me of Cappadonna and even Hell Razah, and that’s the major problem with 7vnseal’s work here. There’s little that distinguishes him from other rappers doing a similar style. “False Gods” has 7vnseal dropping a vicious verse over Wu-Tang Clan’s “Older Godz” with frustrating results. I like the authoritative delivery and lyrical content but the scattered flow and annoying “notes to false gods” chant ruins a decent, if short interpretation of the Wu classic. Being a mixtape, all tracks are cut short to showcase 7vnseal over various beats, except 7vnseal approaches each beat in the same disjointed fashion. “Daggers of Truth” has a ridiculous Alchemist-style, piano-slamming production that is begging to be ridden, but it just goes begging. “Muddy Waters” is similarly neck-snapping but 7vnseal doesn’t rhyme a single bar. I’m left with the feeling of missed opportunities throughout. In fact track eleven; “Reveal Truth” is an acapella track. I could play it simultaneously with any RZA/Mathematics/Bronze Nazareth beat and it would fit in with the other tracks. Even longer songs such as “Camel Hairs” that have potential to be vivid tales of adventure, end up being plain nonsense:

The mixtape sounds as gritty as any Wu-Tang Clan release yet admirably contains no profanity whatsoever. However, other than the imposing vocals that lack any real rhyme or flow pattern, this mixtape is only worth downloading if you enjoy frequent Biblical references and abstract metaphors. 7vnseal clearly has a powerful message and I’m sure he is a successful minister. It’s just no matter how truthful his daggers may be, they need sharpening.