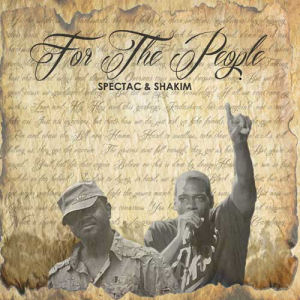 Spectac & Shakim :: For the People

Spectac’s background is a little different from the average. While hip-hop is no stranger toteachers who can rock the mic and the classroom, you don’t often see a school principal who is also an emcee. It may be that perception is everything – teachers are viewed as being closer in age to their students/listeners, while principals are viewed as being authoritarian and disciplinarian. By nature they are almost always a generation removed from both students and teachers. And Spectac does hint at being a little older by referencing the Juice Crew’s classic “Symphony” track on the intro to his “Moment of Truth” posse song, but his rap is new:

“For the People” is the kind of album title that immediately causes cynics to raise a skeptical eyebrow. It’s the kind of phrase thrown out by every ambitious politician and activist, hoping to draw parallels to 18th century revolutionaries, when many of them have anything other than the good of the public in mind. They’ll preach being “for the people” until achieving a measure of power, then promptly forget all their promises, becoming entirely self-serving entities. Now I don’t know Spectac personally so I can’t say what’s in his heart, and even if I did he could be putting up a really good front. His partnership with DJ Shakim on this album suggests a reason for hope though, a cautious optimism, a message that matters. Spectac isn’t too serious though – he can still have fun:

“Had it goin on like me nephew
Long time comin y’all, sorry I kept you
So outerspace, sign me to The Neptunes
Rappers I batttle, send ’em cards – ‘Get well soon’
Black Avenger, Captain America
Iron Man, Thor, I’m so +Incredible+”

“F.A.C.E.” stands for “(Football, Arts, Gomics, Etc.)” and Spectac’s punchlines show he’s not some stuffy principal spitting serious tomes. He’s even got some swagger: “Who’s nice as me nigga?” Seriously considering that question for a minute, I’d say he reminds me of both Ras Kassand Freeway – if you could meld the two vocally he’d be the result. But any good emcee, or even one who is above average like Spectac, still gets no further than banging a lunchtable and spitting freestyles without the right production. The pleasant piano chords and singer samples on “Gone With the Wind” hit all of the right notes. “Can I Kick It” may reference an old Tribe Called Quest jam, but the sound is updated and grimy for 2013 – honoring the past without living in it. “B Sure” is a winner with finger snaps, hi-hat taps and Gregorian chants – almost distracting you from his fly girl raps until a R&B chorus brings it all back. DJ Shakim knows his stuff.

This is the Atlanta based Spectac’s second album, which makes me regret that I somehow managed to miss the first. Now before I sound like a publicist for HiPNOTT Records, let me temper my enthusiasm with the following sentences. If I were to grade Spectac like a teacher he’d score a B+ for diction, a B for delivery (occasionally predictable) and somewhere between a B and B- for content. That’s by no means an insult when hip-hop is overwhelmed with D+ to F grade rappers these days, and all you have to do is “Turn Off the Lights” to look for them. What it does suggest though is that Spectac is good, with the potential to be even better. There’s room to grow and if he continues to partner with DJ Shakim, I won’t be missing his third album. This principal has a lot of people in hip-hop to teach and reach.