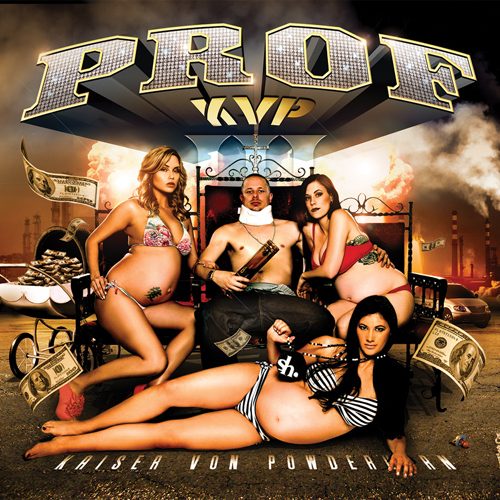 The first time I heard Macklemore & Ryan Lewis’ smash hit “Thrift Shop” I thought to myself, “This could be Prof.” The same wisecrack attitude, the same untamable flow, the same predilection for musical collages. (Accidentally, the Seattle rapper’s full alias used to be Professor Macklemore.) Both also have a serious side to them, and that’s exactly where they go seperate ways. Macklemore can’t help but temper his big dreams with moral and ethical questions, Prof has a seperate mixtape series just to take his antics to new levels of absurdity. “Kaiser von Powderhorn 3” is the latest (released last year), whose trashy tendencies are already announced on the cover, a spoof on the legendarily overblown Pen & Pixel designs that shows Prof surrounded by pregnant swimsuit models, who also happen to be featured in the video for “Me Boi,” a modern day “(You Gotta) Fight For Your Right (To Party!)” anthem that includes Prof yelling, “Get drunk! Break shit!” and boasting, “Put the circus posters up over the billboards / This the type of party college kids will kill for” – appropriately over a Tinie Tempah track called “Pass Out.”

But more than “Licensed to Ill”-era Beastie Boys, “Me Boi” recalls the days of crunk, while the following “Get Some” plays like a soundclash between the Thizz Nation and Strange Music. Borrowing Mac Dre’s carefree clowning, Tech N9ne’s fiery flow, the tomfoolery from both, and adding his own brand of spontaneous singing outbursts, Prof bounces around to the staggering funk provided by producer Julian Fairbanks. “New Kid” resurrects a Jermaine Dupri beat from Daz Dillinger’s So So Def album, a surprisingly coherent choice for the pairing of Prof and old acquaintance Yelawolf, who gives the mixtape’s first major co-sign. The second comes from fellow Minneapolitan Slug, who joins Prof for “Swimming,” a “Felt” style metaphorical girls theme to a minimalistic backdrop.

Like any rapper worth his salt, Prof is able to put his stamp on other people’s beats. “Roughneck” uses the Jahlil Beats production “Green Goblin” (Jae Millz/Chris Brown), a crazy concoction of horn stabs and lots of low end that inspires some rather spectacular flow variations. A flawless vocal technique doesn’t prevent the rapper from trying his chords at singing. “Sex Ed” is a slinky R&B jam featuring original production from Erick Anderson, while “Borrowed Time” uses Childish Gambino’s “Heartbeat” for a rebel yell directed at an older generation standing in the way of the youth: “I’m burnin’ both ends / cause I don’t wanna be your age / at a horse race breakin’ my back over fourth place / Rather middle of a court case / screamin’ in your face / till the show ends.”

One song alone can’t counterbalance the rest of the material. Prof walks a fine line, not just on this free tape, but generally with his music. Even on his regular albums reflective moments are few and far between. Getting stupid is old rap tradition, but there’s a point where dumb, ig’nant, crazy, retarted, ludicrous, etc. is still nothing more than just plain stupid, as tongue-in-cheek as your intentions may be. Overall Prof is an amicable character. He may have some alienating streaks, but his music is inclusive and compassionate. He wants you to have a good time. Scratch that. He makes sure you have a good time. So for now we’ll let Prof do the “Moron” and check back with him when the party’s over.