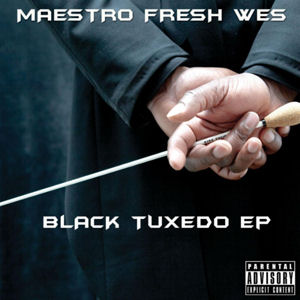 (The Maestro in an interview with Torontoist in 2008)

Meaning… the creative control was completely in Wesley Williams’ hands when he decided to dress for the occasion and go with the image that his chosen rap title might evoke. The album cover and title alluded to classical music, it had a ballad called “Private Symphony” and his hit “Drop the Needle” opened with Beethoven’s 5th, but that’s as far as it went, actually. In retrospect, nobody would accuse him of exploiting a gimmick with “Symphony in Effect.” And yet the subject lingers on his mind, despite having long left those days behind. The title track of his 2012 EP “Black Tuxedo” features someone testifying how some in the local scene were repelled by the sight of the brother in “a black tuxedo with the cummerbund” (“Drop the Needle”) – “They thought him wearing a tuxedo was the wackest thing that any rapper could’ve ever done. Maestro was a victim of the hate that Toronto is famous for.” “Black Tuxedo” then is his retort to the “T.O. critics” he already in ’89 characterized as “hard to please.” “Every now and then I’m reminiscin’ of how you pricks missed it,” he ponders, but still aware of the adulation he also received: “Nitwits couldn’t get their fuckin’ lips off my stick shift / kissin’ on the same tip that the chicks licked.”

All that should be over and done with by now, but Maestro Fresh Wes isn’t the first character to squeeze himself into a worn outfit to settle an old score. If there ever was a point when Maes wanted to dispose of the tux, he now knows it will always be part of his wardrobe, along with the different hats he’s worn (actor and author, more recently). In another one of the EP’s tracks he rhymes, “Shortie played me like Clark Kent, wouldn’t give me her name / When I came with the suit, Lois stayed in her Lane.” (This may be the time to wonder if the makers of the Jackie Chan movie ‘The Tuxedo’ were inspired by the dean of Canadian hip-hop.)

Donning the suit once more (at least figuratively), Maestro goes all the way and starts the EP with a cameo from ‘hip-hop violinist’ (I thought that title was already taken?) Suzka. “Too Melodic” is a re-working of their 2011 track “Neurotic,” produced/remixed by Vanguards member Vago, who chose to support the lively strings with rather twiggy percussion (also plaguing “Black Tuxedo”). Suzka also contributes to “I Wanna Know”, a collaboration with Nova Scotia rock band The Trews that fits in nicely with the theme of an artist reassuring himself of his status and his support:

“I’m deadly on the mic, singles is legendary
But sometimes I feel like rap’s Mike Singletary
The greatest players ain’t always the greatest coaches
I couldn’t show ’em everything, accept my condolence
My apologies if I never gave you all of me
Maybe I ain’t really trust you – pardon me
When you at the top everybody wanna blaze with you
When you not, it’s like they lost faith in you
They hatin’ you, constantly breakin’ you
But when you’re back, there ain’t no replacin’ you
You can’t even imagine what this game’ll make you do
If you ain’t made for this race, start unlacin’ your shoe
Yeah I’m tryina be a good father – I been the godfather
I made the predators pray: ‘Our Father’
Now they got me on a pedestal
But when the storm heavy and the levee blows…”

His heart and probably his business sense as well told Maestro Fresh Wes to consider Canadian artists when looking for music to sample. It began humbly with a simple “Drop the needle!” from Haywire, while 1998’s “Stick to Your Vision” (The Guess Who) and 2005’s “Criminal Mind” (Gowan) featured more substantial samples. Assisted by fellow hip-hop artist Classified, Maestro continues the tradition by incorporating Blue Rodeo’s “Try” into “Reach For the Sky,” an inspirational tune in the vein of “Stick to Your Vision,” his most famous tune after his debut singles.

The Juno-nominated “Black Tuxedo EP” serves as an appetizer for the upcoming full-length “Orchestrated Noise.” Besides breaking out his formal wear from yesteryear, with songs like “I Wanna Know” and “Reach For the Sky” Wes also seems to gauge his commercial potential. These are also the songs that are easier to relate to than the somewhat robotic excercises in ‘classical hip-hop’ “Too Melodic” and “Black Tuxedo,” even as the idea behind them – to offer a modern take on the ‘rap maestro’ concept – is apparent. Either way, with 25 years of experience of ‘conducting things,’ Maestro Fresh Wes is well prepared to land where he once lifted off.